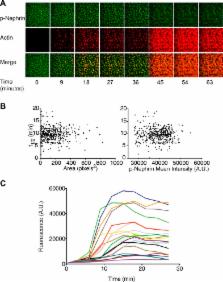 Clustering of proteins into micrometer-sized structures at membranes is observed in many signaling pathways. Most models of clustering are specific to particular systems, and relationships between physical properties of the clusters and their molecular components are not well understood. We report biochemical reconstitution on supported lipid bilayers of protein clusters containing the adhesion receptor Nephrin and its cytoplasmic partners, Nck and N-WASP. With Nephrin attached to the bilayer, multivalent interactions enable these proteins to polymerize on the membrane surface and undergo two-dimensional phase separation, producing micrometer-sized clusters. Dynamics and thermodynamics of the clusters are modulated by the valencies and affinities of the interacting species. In the presence of the Arp2/3 complex, the clusters assemble actin filaments, suggesting that clustering of regulatory factors could promote local actin assembly at membranes. Interactions between multivalent proteins could be a general mechanism for cytoplasmic adaptor proteins to organize membrane receptors into micrometer-scale signaling zones.

The membrane that surrounds a cell is made up of a mixture of lipid molecules and proteins. Membrane proteins perform a wide range of roles, including transmitting signals into, and out of, cells and helping neighboring cells to stick together. To perform these tasks, these proteins commonly need to bind to other molecules—collectively known as ligands—that are found either inside or outside the cell.

Now, Banjade and Rosen have constructed an artificial cell membrane to investigate the clustering of a membrane protein called Nephrin, which is essential for kidneys to function correctly. When it is activated, Nephrin interacts with protein ligands called Nck and N-WASP that are found inside cells and helps filaments of a protein called actin to form. These filaments perform a number of roles including enabling cells to adhere to each other and to move.

In Banjade and Rosen's artificial system, when a critical concentration of ligands was exceeded, clusters of Nephrin, Nck and N-WASP suddenly formed. This suggests that the clusters form through a physical process known as ‘phase separation’. Banjade and Rosen found that this critical concentration depends on how strongly the proteins interact and the number of sites they possess to bind each other.

Within the clusters, the three proteins formed large polymer chains. The clusters were mobile and, over time, small clusters coalesced into larger clusters. Even though the clusters persisted for hours, individual proteins did not stay in a given cluster for long and instead continuously exchanged back-and-forth between the cluster and its surroundings.

When actin and another protein complex that interacts with N-WASP were added to the artificial membrane system, actin filaments began to form at the protein clusters. Banjade and Rosen suggest that such clusters act as ‘signaling zones’ that coordinate the construction of the actin filaments. Regions that are also found in many other signaling proteins mediate the interactions between Nephrin, Nck and N-WASP. Banjade and Rosen therefore suggest that phase separation and protein polymer formation could explain how many different types of membrane proteins form clusters.