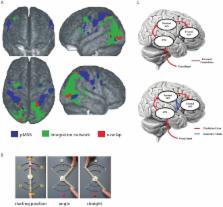 Studies investigating joint actions have suggested a central role for the putative mirror neuron system (pMNS) because of the close link between perception and action provided by these brain regions [1], [2], [3]. In contrast, our previous functional magnetic resonance imaging (fMRI) experiment demonstrated that the BOLD response of the pMNS does not suggest that it directly integrates observed and executed actions during joint actions [4]. To test whether the pMNS might contribute indirectly to the integration process by sending information to brain areas responsible for this integration (integration network), here we used Granger causality mapping (GCM) [5]. We explored the directional information flow between the anterior sites of the pMNS and previously identified integrative brain regions. We found that the left BA44 sent more information than it received to both the integration network (left thalamus, right middle occipital gyrus and cerebellum) and more posterior nodes of the pMNS (BA2). Thus, during joint actions, two anatomically separate networks therefore seem effectively connected and the information flow is predominantly from anterior to posterior areas of the brain. These findings suggest that the pMNS is involved indirectly in joint actions by transforming observed and executed actions into a common code and is part of a generative model that could predict the future somatosensory and visual consequences of observed and executed actions in order to overcome otherwise inevitable neural delays.

An internal model for sensorimotor integration.

Z Ghahramani,  Daniel Wolpert,  T. Jordan (1995)
On the basis of computational studies it has been proposed that the central nervous system internally simulates the dynamic behavior of the motor system in planning, control, and learning; the existence and use of such an internal model is still under debate. A sensorimotor integration task was investigated in which participants estimated the location of one of their hands at the end of movements made in the dark and under externally imposed forces. The temporal propagation of errors in this task was analyzed within the theoretical framework of optimal state estimation. These results provide direct support for the existence of an internal model.

ALE meta-analysis of action observation and imitation in the human brain.

Predictive coding: an account of the mirror neuron system.

Karl Friston,  Philip J Kilner,  Christopher D. Frith (2007)
Is it possible to understand the intentions of other people by simply observing their actions? Many believe that this ability is made possible by the brain's mirror neuron system through its direct link between action and observation. However, precisely how intentions can be inferred through action observation has provoked much debate. Here we suggest that the function of the mirror system can be understood within a predictive coding framework that appeals to the statistical approach known as empirical Bayes. Within this scheme the most likely cause of an observed action can be inferred by minimizing the prediction error at all levels of the cortical hierarchy that are engaged during action observation. This account identifies a precise role for the mirror system in our ability to infer intentions from actions and provides the outline of the underlying computational mechanisms.