Use of the moving epidemic method (MEM) to assess national surveillance data for respiratory syncytial virus (RSV) in the Netherlands, 2005 to 2017 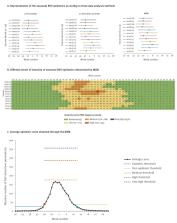 To control respiratory syncytial virus (RSV), which causes acute respiratory infections, data and methods to assess its epidemiology are important.

We sought to describe RSV seasonality, affected age groups and RSV-type distribution over 12 consecutive seasons in the Netherlands, as well as to validate the moving epidemic method (MEM) for monitoring RSV epidemics.

We used 2005−17 laboratory surveillance data and sentinel data. For RSV seasonality evaluation, epidemic thresholds (i) at 1.2% of the cumulative number of RSV-positive patients per season and (ii) at 20 detections per week (for laboratory data) were employed. We also assessed MEM thresholds.

Kimberly Bloom-Feshbach,  Wladimir J Alonso,  Vivek Charu … (2013)
Background There is limited information on influenza and respiratory syncytial virus (RSV) seasonal patterns in tropical areas, although there is renewed interest in understanding the seasonal drivers of respiratory viruses. Methods We review geographic variations in seasonality of laboratory-confirmed influenza and RSV epidemics in 137 global locations based on literature review and electronic sources. We assessed peak timing and epidemic duration and explored their association with geography and study settings. We fitted time series model to weekly national data available from the WHO influenza surveillance system (FluNet) to further characterize seasonal parameters. Results Influenza and RSV activity consistently peaked during winter months in temperate locales, while there was greater diversity in the tropics. Several temperate locations experienced semi-annual influenza activity with peaks occurring in winter and summer. Semi-annual activity was relatively common in tropical areas of Southeast Asia for both viruses. Biennial cycles of RSV activity were identified in Northern Europe. Both viruses exhibited weak latitudinal gradients in the timing of epidemics by hemisphere, with peak timing occurring later in the calendar year with increasing latitude (P<0.03). Time series model applied to influenza data from 85 countries confirmed the presence of latitudinal gradients in timing, duration, seasonal amplitude, and between-year variability of epidemics. Overall, 80% of tropical locations experienced distinct RSV seasons lasting 6 months or less, while the percentage was 50% for influenza. Conclusion Our review combining literature and electronic data sources suggests that a large fraction of tropical locations experience focused seasons of respiratory virus activity in individual years. Information on seasonal patterns remains limited in large undersampled regions, included Africa and Central America. Future studies should attempt to link the observed latitudinal gradients in seasonality of viral epidemics with climatic and population factors, and explore regional differences in disease transmission dynamics and attack rates.

Marie Griffin,  Yuwei Zhu,  H Keipp Talbot … (2012)
We performed a prospective study to determine the disease burden of respiratory syncytial virus (RSV) and human metapneumovirus (HMPV) in older adults in comparison with influenza virus. During 3 consecutive winters, we enrolled Davidson County (Nashville, TN) residents aged ≥ 50 years admitted to 1 of 4 hospitals with acute respiratory illness (ARI). Nasal/throat swabs were tested for influenza, RSV, and HMPV with reverse-transcriptase polymerase chain reaction. Hospitalization rates were calculated. Of 1042 eligible patients, 508 consented to testing. Respiratory syncytial virus was detected in 31 participants (6.1%); HMPV was detected in 23 (4.5%) patients; and influenza was detected in 33 (6.5%) patients. Of those subjects aged ≥ 65 years, 78% received influenza vaccination. Compared with patients with confirmed influenza, patients with RSV were older and more immunocompromised; patients with HMPV were older, had more cardiovascular disease, were more likely to have received the influenza vaccination, and were less likely to report fever than those with influenza. Over 3 years, average annual rates of hospitalization were 15.01, 9.82, and 11.81 per 10,000 county residents due to RSV, HMPV, and influenza, respectively. In adults aged ≥ 50 years, hospitalization rates for RSV and HMPV were similar to those associated with influenza.

Mirjam Kretzschmar,  Marion Koopmans,  Wim Van Paesschen … (2012)
Because there may be substantial hidden mortality caused by common seasonal pathogens, we estimated the number of deaths in elderly persons attributable to viruses and bacteria for which robust weekly laboratory surveillance data were available. On weekly time series (1999-2007) we used regression models to associate total death counts in individuals aged 65-74, 75-84, and ≥85 years (a population of 2.5 million) with pathogen circulation-influenza A (season-specific), influenza B, respiratory syncytial virus (RSV), parainfluenza, enterovirus, rotavirus, norovirus, Campylobacter, and Salmonella-adjusted for extreme outdoor temperatures. Influenza A and RSV were significantly (P < .05) associated with mortality in all studied age groups; influenza B and parainfluenza were additionally associated in those aged ≥75 years, and norovirus was additionally associated in those aged ≥85 years. The proportions of deaths attributable to seasonal viruses were 6.8% (≥85 years), 4.4% (75-84 years), and 1.4% (65-74 years), but with great variations between years. Influenza occasionally showed lower impact than some of the other viruses. The number of different pathogens associated with mortality in the older population increases with increasing age. Besides influenza A and RSV, influenza B, parainfluenza and norovirus may also contribute substantially to elderly mortality.