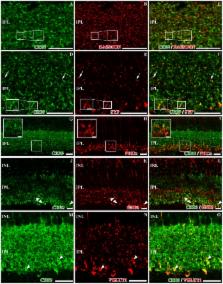 CRB3 (Crumbs homologue 3), a member of the CRB protein family (homologous to the Drosophila Crumbs), is expressed in different epithelium-derived cell types in mammals, where it seems to be involved in regulating the establishment and stability of tight junctions and in ciliogenesis. This protein has been also detected in the retina, but little is known about its localization and function in this tissue. Our goal here was to perform an in-depth study of the presence of CRB3 protein in the mouse retina and to analyze its expression during photoreceptor ciliogenesis and the establishment of the plexiform retinal layers. Double immunofluorescence experiments for CRB3 and well-known markers for the different retinal cell types were performed to study the localization of the CRB3 protein. According to our results, CRB3 is present from postnatal day 0 (P0) until adulthood in the mouse retina. It is localized in the inner segments (IS) of photoreceptor cells, especially concentrated in the area where the connecting cilium is located, in their synaptic terminals in the outer plexiform layer (OPL), and in sub-populations of amacrine and bipolar cells in the inner plexiform layer (IPL).

M Ozawa,  R Kemler,  H Baribault (1989)
Uvomorulin belongs to the group of Ca2+-dependent cell adhesion molecules, which are integral membrane proteins with several structural features in common. In particular, the cytoplasmic part of these proteins is highly conserved in different species, suggesting a common biological function. To test this assumption we transfected a uvomorulin full-length cDNA into uvomorulin-negative mouse NIH 3T3 and L cells. Immunoprecipitations with anti-uvomorulin antibodies detected, in addition to uvomorulin, three independent proteins of 102, 88 and 80 kd which are of host origin and which form complexes with uvomorulin. Using cDNA constructs coding for uvomorulin with cytoplasmic or extracellular deletions it is shown that the 102, 88 and 80 kd proteins complex with the cytoplasmic domain of uvomorulin. Peptide pattern analysis revealed that these three proteins are identical in different mouse cells. When uvomorulin cDNA was introduced into cell lines from other species, such as human HeLa and avian fibroblasts, the expressed uvomorulin was also associated with endogenous 102, 88 and 80 kd proteins and, moreover, each of these proteins showed structural similarities to the respective mouse molecule. A panel of antibodies specific for known cytoplasmic proteins of mol. wts similar to those of the three proteins did not react with any of the described components. This suggests that the 102, 88 and 80 kd proteins constitute a new group of proteins for which we propose the nomenclature of catenin alpha, beta and gamma respectively. The characterization of these proteins provides a first molecular basis for a possible cytoplasmic anchorage of uvomorulin to the cytoskeleton.

Niranjala Tillakaratne,  N. D. Patel,  Mark Erlander … (1991)
gamma-Aminobutyric acid (GABA) is the most widely distributed known inhibitory neurotransmitter in the vertebrate brain. GABA also serves regulatory and trophic roles in several other organs, including the pancreas. The brain contains two forms of the GABA synthetic enzyme glutamate decarboxylase (GAD), which differ in molecular size, amino acid sequence, antigenicity, cellular and subcellular location, and interaction with the GAD cofactor pyridoxal phosphate. These forms, GAD65 and GAD67, derive from two genes. The distinctive properties of the two GADs provide a substrate for understanding not only the multiple roles of GABA in the nervous system, but also the autoimmune response to GAD in insulin-dependent diabetes mellitus.

crumbs encodes an EGF-like protein expressed on apical membranes of Drosophila epithelial cells and required for organization of epithelia.

E Knust,  C Theres,  U Tepass (1990)
We describe the molecular characterization of the Drosophila gene crumbs, which encodes an integral membrane protein with 30 EGF-like repeats in the extracellular part and exhibits a striking expression pattern. The protein is exclusively localized on the apical membranes of epithelial cells and concentrated at the borders between cells. Mutations in crumbs lead to severe disruptions in the organization of ectodermally derived epithelia and in some cases to cell death in these tissues. The structure and the expression pattern of the protein and the phenotype of mutations indicate a function of crumbs during the development of epithelia, possibly for the establishment and/or maintenance of cell polarity.