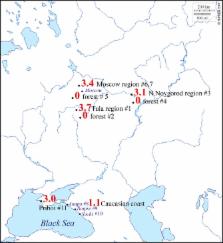 Dirofilariasis is endemic in Russia, as well as in many other European countries. The aim of this study was to assess the ability of mosquitoes to transfer Dirofilaria immitis and Dirofilaria repens in regions with temperate and subtropical climates. The possible impact of the symbiotic bacterium Wolbachia on Dirofilaria transmission was also investigated. 5333 female mosquitoes were collected at 11 points in central European Russia and on the Black Sea coast during the period 2013–2017. Out of 20 mosquito species examined, 14 were infected with D. repens and 13 with D. immitis. Both species of Dirofilaria were found in different climatic regions. The total Dirofilaria spp. estimated infection rate (EIR) in the central part of Russia varied from 3.1% to 3.7% and, in the southern region, from 1.1% to 3.0%. The highest estimated infection rate was found in Anopheles messeae, the lowest in Culex pipiens. The greatest epidemiological danger was represented by Aedes aegypti, Ae. geniculatus, An. messeae and Ae. communis. Six out of 20 mosquito species were infected with Wolbachia. Pools of Aedes albopictus, Cx. pipiens and Coquillettidia richiardii were simultaneously infected with Dirofilaria and Wolbachia. After checking mosquitoes individually, it was found that there was no development of Dirofilaria to the infective larval stage in specimens infected with Wolbachia. Twenty-two Dirofilaria-infective pools were Wolbachia-free and only two mosquito pools were Wolbachia-infected. The potential for transmission of Dirofilaria in mosquito species naturally uninfected with the symbiotic bacterium Wolbachia is higher than in species infected with the bacterium.

Yao Xu,  Peng Lu,  George Dimopoulos … (2013)
Wolbachia is a maternally transmitted symbiotic bacterium of insects that has been proposed as a potential agent for the control of insect-transmitted diseases. One of the major limitations preventing the development of Wolbachia for malaria control has been the inability to establish inherited infections of Wolbachia in anopheline mosquitoes. Here, we report the establishment of a stable Wolbachia infection in an important malaria vector, Anopheles stephensi. In A. stephensi, Wolbachia strain wAlbB displays both perfect maternal transmission and the ability to induce high levels of cytoplasmic incompatibility. Seeding of naturally uninfected A. stephensi populations with infected females repeatedly resulted in Wolbachia invasion of laboratory mosquito populations. Furthermore, wAlbB conferred resistance in the mosquito to the human malaria parasite Plasmodium falciparum.

Climate and Dirofilaria infection in Europe.

Claudio Genchi,  Laura Rinaldi,  Michele Mortarino … (2009)
Climatic changes, together with an increase in the movement of cats and dogs across Europe, have caused an increase in the geographical range of several vector borne parasites like Dirofilaria, and in the risk of infection for animals and humans. The present paper reviews the effects of climate and other global drivers on Dirofilaria immitis and Dirofilaria repens infections in Europe and the possible implications on the transmission and control of these mosquito-borne nematodes. In the last several years, growing degree day (GDD)-based forecast models, which use wide or local scale temperature data, have been developed to predict the occurrence and seasonality of Dirofilaria in different parts of the world. All these models are based on the fact that: there is a threshold of 14 degrees C below which Dirofilaria development will not proceed; and there is a requirement of 130 GDD for larvae to reach infectivity and a maximum life expectancy of 30 days for a vector mosquito. The output of these models predicts that the summer temperatures (with peaks in July) are sufficient to facilitate extrinsic incubation of Dirofilaria even at high latitudes. The global warming projected by the Intergovernmental Panel on Climate Change suggests that warm summers suitable for Dirofilaria transmission in Europe will be the rule in the future decades and if the actual trend of temperature increase continues, filarial infection should spread into previously infection-free areas. These factors not only favour incubation of Dirofilaria, but also impact on mosquito species. Recent findings have also demonstrated that Aedes albopictus is now considered to be an important, competent vector of Dirofilaria infections. This mosquito species could spread from southern to northern European countries in the near future, changing the epidemiological patterns of dirofilariosis both in humans and animals.

Richard Wilkerson,  Yvonne-Marie Linton,  Dina Fonseca … (2015)
The tribe Aedini (Family Culicidae) contains approximately one-quarter of the known species of mosquitoes, including vectors of deadly or debilitating disease agents. This tribe contains the genus Aedes, which is one of the three most familiar genera of mosquitoes. During the past decade, Aedini has been the focus of a series of extensive morphology-based phylogenetic studies published by Reinert, Harbach, and Kitching (RH&K). Those authors created 74 new, elevated or resurrected genera from what had been the single genus Aedes, almost tripling the number of genera in the entire family Culicidae. The proposed classification is based on subjective assessments of the “number and nature of the characters that support the branches” subtending particular monophyletic groups in the results of cladistic analyses of a large set of morphological characters of representative species. To gauge the stability of RH&K’s generic groupings we reanalyzed their data with unweighted parsimony jackknife and maximum-parsimony analyses, with and without ordering 14 of the characters as in RH&K. We found that their phylogeny was largely weakly supported and their taxonomic rankings failed priority and other useful taxon-naming criteria. Consequently, we propose simplified aedine generic designations that 1) restore a classification system that is useful for the operational community; 2) enhance the ability of taxonomists to accurately place new species into genera; 3) maintain the progress toward a natural classification based on monophyletic groups of species; and 4) correct the current classification system that is subject to instability as new species are described and existing species more thoroughly defined. We do not challenge the phylogenetic hypotheses generated by the above-mentioned series of morphological studies. However, we reduce the ranks of the genera and subgenera of RH&K to subgenera or informal species groups, respectively, to preserve stability as new data become available.