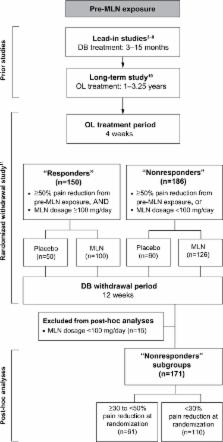 Fibromyalgia patients from a long-term, open-label study of milnacipran (50–200 mg/day) were eligible to participate in a 12-week, randomized, placebo-controlled withdrawal study. The withdrawal study evaluated loss of therapeutic response in patients who achieved ≥50% pain improvements after receiving up to 3.25 years of milnacipran. This post-hoc analysis investigated whether patients who met lower thresholds of pain improvement also experienced worsening of fibromyalgia symptoms upon treatment withdrawal.

Patients who experienced ≥30% to <50% pain reduction with long-term milnacipran had significant worsening of fibromyalgia symptoms after treatment withdrawal. These results suggest that the conventional ≥30% pain responder cutoff may be adequate to demonstrate efficacy in randomized withdrawal studies of fibromyalgia. Patients in the <30% pain reduction subgroup had worsening scores on the FIQR and other multidimensional measures after treatment withdrawal, indicating the importance of identifying and managing the multiple symptoms of fibromyalgia.

Malcolm J. Bennett,  Neil R. Clark,  Anna K Bennett … (1991)
An instrument has been developed to assess the current health status of women with the fibromyalgia syndrome. The Fibromyalgia Impact Questionnaire (FIQ) is a brief 10-item, self-administered instrument that measures physical functioning, work status, depression, anxiety, sleep, pain, stiffness, fatigue, and well being. We describe its development and validation. This initial assessment indicates that the FIQ has sufficient evidence of reliability and validity to warrant further testing in both research and clinical situations.

The prevalence and characteristics of fibromyalgia in the general population.

Margaret Ross,  Roger Shere-Wolfe,  Harry L. Hebert … (1994)
To determine the prevalence and characteristics of fibromyalgia in the general population. A random sample of 3,006 persons in Wichita, KS, were characterized according to the presence of no pain, non-widespread pain, and widespread pain. A subsample of 391 persons, including 193 with widespread pain, were examined and interviewed in detail. The prevalence of fibromyalgia was 2.0% (95% confidence interval [95% CI] 1.4, 2.7) for both sexes, 3.4% (95% CI 2.3, 4.6) for women, and 0.5% (95% CI 0.0, 1.0) for men. The prevalence of the syndrome increased with age, with highest values attained between 60 and 79 years (> 7.0% in women). Demographic, psychological, dolorimetry, and symptom factors were associated with fibromyalgia. Fibromyalgia is common in the population, and occurs often in older persons. Characteristic features of fibromyalgia--pain threshold and symptoms--are similar in community and clinic populations, but overall severity, pain, and functional disability are more severe in the clinic population.

Robert M Bennett,  Ronald Friend,  Kim Jones … (2009)
Introduction The Fibromyalgia Impact Questionnaire (FIQ) is a commonly used instrument in the evaluation of fibromyalgia (FM) patients. Over the last 18 years, since the publication of the original FIQ, several deficiencies have become apparent and the cumbersome scoring algorithm has been a barrier to widespread clinical use. The aim of this paper is to describe and validate a revised version of the FIQ: the FIQR. Methods The FIQR was developed in response to known deficiencies of the FIQ with the help of a patient focus group. The FIQR has the same 3 domains as the FIQ (that is, function, overall impact and symptoms). It differs from the FIQ in having modified function questions and the inclusion of questions on memory, tenderness, balance and environmental sensitivity. All questions are graded on a 0–10 numeric scale. The FIQR was administered online and the results were compared to the same patient's online responses to the 36-Item Short Form Health Survey (SF-36) and the original FIQ. Results The FIQR was completed online by 202 FM patients, 51 rheumatoid arthritis (RA) or systemic lupus erythematosus (SLE) patients (31 RA and 20 SLE), 11 patients with major depressive disorder (MDD) and 213 healthy controls (HC). The mean total FIQR score was 56.6 ± 19.9 compared to a total FIQ score of 60.6 ± 17.8 (P < 0.03). The total scores of the FIQR and FIQ were closely correlated (r = 0.88, P < 0.001). Each of the 3 domains of the FIQR correlated well with the 3 related FIQ domains (r = 0.69 to 0.88, P < 0.01). The FIQR showed good correlation with comparable domains in the SF-36, with a multiple regression analysis showing that the three FIQR domain scores predicted the 8 SF-36 subscale scores. The FIQR had good discriminant ability between FM and the 3 other groups; total FIQR scores were HC (12.1 ± 11.6), RA/SLE (28.6 ± 21.2) and MDD (17.3 ± 11.8). The patient completion time was 1.3 minutes; scoring took about 1 minute. Conclusions The FIQR is an updated version of the FIQ that has good psychometric properties, can be completed in less than 2 minutes and is easy to score. It has scoring characteristics comparable to the original FIQ, making it possible to compare past FIQ results with future FIQR results.