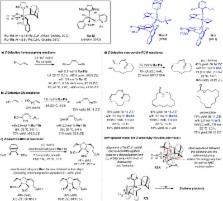 Journal: The Journal of Organic Chemistry

There have been numerous significant advances in catalytic olefin metathesis (OM) during the past two decades. Such progress has transformed this important set of reactions to strategically pivotal processes that generate stereochemical identity while delivering molecules that cannot be easily prepared by alternative routes. In this Perspective, an analysis of the origin of the inception of bidentate benzylidene ligands for Ru-based OM catalysts is first presented. This is followed by an overview of the intellectual basis that culminated in the development of Mo-based diolates and stereogenic-at-Ru complexes for enantioselective OM. The principles accrued from the study of the latter Ru carbenes and Mo alkylidenes and utilized in the design of stereogenic-at-Mo, -W, and -Ru species applicable to enantioselective and Z-selective OM are then discussed. The influence of the recently introduced catalytic OM protocols on the design of synthesis routes leading to complex organic molecules is probed. The impact of a better understanding of the mechanistic nuances of OM toward the discovery of stereoselective catalysts is reviewed as well.