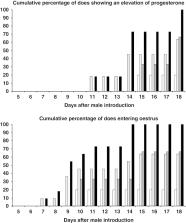 The exposure of adult, female, Mediterranean goats during anoestrus to males with induced sexual activity via photostimulation, induces a very high percentage of ovulations. The present work examines the ability of photostimulated bucks to improve the male effect-induced reproductive response of young does over that induced by non-stimulated bucks. A 2×2 factorial experiment was designed, consisting of doe age and buck photoperiod treatments. During seasonal anoestrus, 41 does aged 7 ( n=19) or 10 ( n=22) months were subjected to the male effect on 10 April; half of each group was exposed to males rendered sexually active by prior exposure to 3 months of long days (16 h of light/day) from 31 October (PHOTO bucks), and half to males maintained under the natural photoperiod (CONTROL bucks). Oestrous activity was recorded daily by direct visual observation of the marks left by male-worn marking harnesses over the 32 days following the bringing of the sexes together (introduction). Doe body weight and body condition were determined weekly. Ovulation was detected by measuring plasma progesterone concentrations twice per week over the 3 weeks after introduction. The ovulation rate was assessed by transrectal ultrasonography. Fecundity, fertility, prolificacy and productivity were also determined. The interaction doe age × buck photoperiod treatment had no effect on any outcome. The percentage of females showing ovulation or oestrus was higher in the does exposed to PHOTO bucks (85% v. 43% for those exposed to CONTROL bucks) they also showed higher fertility (75% v. 43%) and productivity (1.05±0.17 v. 0.57±0.16 kids born per doe serviced) (all P values at least P<0.05). The 10-month-old group showed higher percentage of females showing ovulation, oestrus, fertility and productivity than the 7-month-old does after the male effect (females showing ovulation: 82% v. 42%; showing oestrus: 73% v. 42%; fertility: 73% v. 42% and productivity: 1.09±0.17 v. 0.47±0.14 goat kids born per doe serviced; respectively, all P values at least P<0.05). The present results show that the use of photostimulated males improves the reproductive performance of 7- and 10-month-old does, and may contribute towards increasing their productivity and lifetime reproductive performance.

Ovarian structures during the estrous cycle and early pregnancy in ewes.

Adam J. Pritchard,  Sunny E. Townsend,  R Surface … (1993)
The development of ovarian follicular and luteal structures during the estrous cycle and early pregnancy in ewes was examined. Ewes were treated with prostaglandin F2 alpha to induce estrus; they were placed with either two fertile or two vasectomized rams and observed for estrus twice daily. Beginning at estrus (Day 0), ovaries were scanned for CL and for follicles > or = 2 mm by transrectal ultrasonography daily for the first 25 days of pregnancy (PREG, n = 17 ewes) or until Day 8 of the second estrous cycle (CYC, n = 15 ewes). Jugular blood samples were collected at ultrasonography and on Days 30, 35, and 40 of gestation for RIA of progesterone and estradiol-17 beta. Total follicles (17.6 +/- 1.3), number of follicles > or = 4 mm in diameter (11.3 +/- 0.6), and number of follicles that became the largest during the first 16 days of pregnancy or the first estrous cycle (4.9 +/- 0.3) did not differ between PREG and CYC ewes. Number of newly detected follicles each day and difference in mean diameter between the largest two follicles and all other follicles were similar between PREG and CYC ewes until luteal regression. At that time, difference in diameter between the largest two follicles and all other follicles increased in CYC ewes in parallel with estradiol-17 beta in serum. Mean concentrations of progesterone in serum were higher in PREG than in CYC ewes (2.4 +/- 0.1 vs. 2.0 +/- 0.1 ng/ml; p < 0.05) before onset of luteal regression, but mean areas of CL did not differ.(ABSTRACT TRUNCATED AT 250 WORDS)

Internal and external determinants of the timing of puberty in the female.

Deborah Olster,  Ian D L Foster,  S Yellon (1985)
A working hypothesis is proposed to account for the timing of puberty in female sheep. In the immature female, the frequency of LH pulses is low, and ovarian follicles do not develop to an advanced stage. During the pubertal transition, the frequency of LH pulses increases to drive follicular development and the production of oestradiol which evokes the gonadotrophin surge and ovulation. Central to the hypothesis is the hypothalamic pulse generator for GnRH that directs the pattern and level of LH secretion. Growth-related cues are monitored to regulate the activity of the GnRH pulse generator. When a sufficient body size is attained, the frequency of LH pulses increases both because the sensitivity to oestradiol inhibitory feedback decreases and because the GnRH pulse generator can be accelerated by the steroid. This increase in LH pulse frequency occurs provided the female has experienced the requisite exposure to photoperiod, i.e. the long days of summer followed by the short days of autumn. These photoperiodic cues are transduced by the pineal gland into a humoral signal which is an increased nocturnal production of melatonin. Failure to grow to the appropriate body size or to experience the appropriate exposure to photoperiod leads to a maintenance of the prepubertal anovulatory condition because the GnRH pulse generator operates at low frequency.

Pádraig Moran,  Maritza I. Duarte,  B Malpaux … (2001)
The aim of this study was to determine whether the sexual activity of local male Creole goats in subtropical Mexico can be induced during the non-breeding season by a long-day treatment followed by insertion of two melatonin implants. The experiment was carried out in the Laguna region in the State of Coahuila, Mexico (26 degrees N). Fourteen male goats were allocated to two balanced groups (n = 7 each) according to body and testicular weights. Males were kept together in two separate groups and fed lucerne hay for ad libitum intake and 300 g of commercial concentrate and had free access to water and mineral blocks. The control group remained in open sheds under natural photoperiod and ambient temperature conditions. The experimental group was placed in a light-proof building and exposed to 2.5 mo of long days (16 h of light/d) from November 1 to January 15. On January 16, each male received two s.c. melatonin implants and was exposed to natural photoperiodic changes in an open shed. In the control group, testicular weight exhibited seasonal variations; the highest value occurred on May 30 (146 +/- 10 g). Treated males reached maximum testicular weight earlier (March 15; 147 +/- 11 g), and sperm quality from January to March was higher than that observed in the control group (P < 0.05). Treatment caused an increase in LH pulse frequency (2.0 +/- 0.5 vs 0.3 +/- 0.2 pulse/8 h in February, 4.6 +/- 1.1 vs 0.1 +/- 0.1 pulse/8 h in March; experimental vs control group, respectively). In the control group, plasma testosterone remained low until mid-June and increased thereafter to remain elevated until the end of the study. In the experimental group, elevated plasma testosterone was observed from February to April and from July to November. Treating male goats in subtropical latitudes with artificial long days and melatonin can induce an intense sexual activity during the natural nonbreeding season.

This is an Open Access article, distributed under the terms of the Creative Commons Attribution-NonCommercial-ShareAlike licence ( http://creativecommons.org/licenses/by-nc-sa/4.0/), which permits non-commercial re-use, distribution, and reproduction in any medium, provided the same Creative Commons licence is included and the original work is properly cited. The written permission of Cambridge University Press must be obtained for commercial re-use.