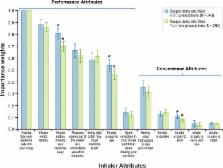 Physicians consider ease of use, satisfaction, and preferences when prescribing an inhaler device. These factors may impact appropriate usage and compliance.

The objectives were to quantify the relative importance of inhaler attributes in patients currently using Combivent Respimat by eliciting preferences for performance and convenience attributes assessed by items in the Patient Satisfaction and Preference Questionnaire (PASAPQ).

Using a pharmacy database, 19,964 adults in the United States who filled ≥2 Combivent Respimat prescriptions were identified. Of those, 8150 patients were randomly selected to receive invitation letters. The online cross-sectional survey included the PASAPQ and best-worst scaling (BWS) questions. The PASAPQ measures satisfaction with medication attributes across two domains: performance and convenience. BWS questions asked participants to select the most and least important device attributes. A descriptive statistics analysis of the PASAPQ and a random-parameters logit model of BWS responses were conducted.

The survey was completed by 503 participants. Most were female (57.3%), white (88.5%), and 51–70 years old (67.6%). Approximately 47% reported a chronic obstructive pulmonary disease diagnosis, 21.9% asthma, 8.2% other lung disease, and 23.1% more than one lung disease. PASAPQ scores indicated that the majority were satisfied or very satisfied; up to 20% reported being dissatisfied with Combivent Respimat. The three most important inhaler attributes were Feeling that your medicine gets into your lungs, Inhaler works reliably, and Inhaler makes inhaling your medicine easy. The most important attributes corresponded to six of seven items in the PASAPQ performance domain.

Effect of incorrect use of dry powder inhalers on management of patients with asthma and COPD.

M. Broeders,  Chris J Corrigan,  Lorenzo Corbetta … (2008)
Incorrect usage of inhaler devices might have a major influence on the clinical effectiveness of the delivered drug. This issue is poorly addressed in management guidelines. This article presents the results of a systematic literature review of studies evaluating incorrect use of established dry powder inhalers (DPIs) by patients with asthma or chronic obstructive pulmonary disease (COPD). Overall, we found that between 4% and 94% of patients, depending on the type of inhaler and method of assessment, do not use their inhalers correctly. The most common errors made included failure to exhale before actuation, failure to breath-hold after inhalation, incorrect positioning of the inhaler, incorrect rotation sequence, and failure to execute a forceful and deep inhalation. Inefficient DPI technique may lead to insufficient drug delivery and hence to insufficient lung deposition. As many as 25% of patients have never received verbal inhaler technique instruction, and for those that do, the quality and duration of instruction is not adequate and not reinforced by follow-up checks. This review demonstrates that incorrect DPI technique with established DPIs is common among patients with asthma and COPD, and suggests that poor inhalation technique has detrimental consequences for clinical efficacy. Regular assessment and reinforcement of correct inhalation technique are considered by health professionals and caregivers to be an essential component of successful asthma management. Improvement of asthma and COPD management could be achieved by new DPIs that are easy to use correctly and are forgiving of poor inhalation technique, thus ensuring more successful drug delivery.

Best--worst scaling: What it can do for health care research and how to do it.

Stephan J A C Peters,  Terry N Flynn,  Jordan Louviere … (2006)
Statements like "quality of care is more highly valued than waiting time" can neither be supported nor refuted by comparisons of utility parameters from a traditional discrete choice experiment (DCE). Best--worst scaling can overcome this problem because it asks respondents to perform a different choice task. However, whilst the nature of the best--worst task is generally understood, there are a number of issues relating to the design and analysis of a best--worst choice experiment that require further exposition. This paper illustrates how to aggregate and analyse such data and using a quality of life pilot study demonstrates how richer insights can be drawn by the use of best--worst tasks.

A literature review to explore the link between treatment satisfaction and adherence, compliance, and persistence