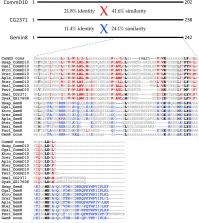 Spinal Muscular Atrophy (SMA) is caused by homozygous mutations in the human survival motor neuron 1 ( SMN1) gene. SMN protein has a well-characterized role in the biogenesis of small nuclear ribonucleoproteins (snRNPs), core components of the spliceosome. SMN is part of an oligomeric complex with core binding partners, collectively called Gemins. Biochemical and cell biological studies demonstrate that certain Gemins are required for proper snRNP assembly and transport. However, the precise functions of most Gemins are unknown. To gain a deeper understanding of the SMN complex in the context of metazoan evolution, we investigated its composition in Drosophila melanogaster. Using transgenic flies that exclusively express Flag-tagged SMN from its native promoter, we previously found that Gemin2, Gemin3, Gemin5, and all nine classical Sm proteins, including Lsm10 and Lsm11, co-purify with SMN. Here, we show that CG2941 is also highly enriched in the pulldown. Reciprocal co-immunoprecipitation reveals that epitope-tagged CG2941 interacts with endogenous SMN in Schneider2 cells. Bioinformatic comparisons show that CG2941 shares sequence and structural similarity with metazoan Gemin4. Additional analysis shows that three other genes ( CG14164 , CG31950 and CG2371 ) are not orthologous to Gemins 6-7-8, respectively, as previously suggested. In D.melanogaster, CG2941 is located within an evolutionarily recent genomic triplication with two other nearly identical paralogous genes ( CG32783 and CG32786 ). RNAi-mediated knockdown of CG2941 and its two close paralogs reveals that Gemin4 is essential for organismal viability.

Xiao Wang,  Julian Dow,  Venkateswara Chintapalli … (2007)
FlyAtlas, a new online resource, provides the most comprehensive view yet of expression in multiple tissues of Drosophila melanogaster. Meta-analysis of the data shows that a significant fraction of the genome is expressed with great tissue specificity in the adult, demonstrating the need for the functional genomic community to embrace a wide range of functional phenotypes. Well-known developmental genes are often reused in surprising tissues in the adult, suggesting new functions. The homologs of many human genetic disease loci show selective expression in the Drosophila tissues analogous to the affected human tissues, providing a useful filter for potential candidate genes. Additionally, the contributions of each tissue to the whole-fly array signal can be calculated, demonstrating the limitations of whole-organism approaches to functional genomics and allowing modeling of a simple tissue fractionation procedure that should improve detection of weak or tissue-specific signals.

Anup Sharma,  Bernard Charroux,  Josée Dostie … (2002)
Gemin3 is a DEAD-box RNA helicase that binds to the Survival of Motor Neurons (SMN) protein and is a component of the SMN complex, which also comprises SMN, Gemin2, Gemin4, Gemin5, and Gemin6. Reduction in SMN protein results in Spinal muscular atrophy (SMA), a common neurodegenerative disease. The SMN complex has critical functions in the assembly/restructuring of diverse ribonucleoprotein (RNP) complexes. Here we report that Gemin3 and Gemin4 are also in a separate complex that contains eIF2C2, a member of the Argonaute protein family. This novel complex is a large approximately 15S RNP that contains numerous microRNAs (miRNAs). We describe 40 miRNAs, a few of which are identical to recently described human miRNAs, a class of small endogenous RNAs. The genomic sequences predict that miRNAs are likely to be derived from larger precursors that have the capacity to form stem-loop structures.

You-Cheol Hwang,  Anna Shemorry,  Alexander Varshavsky (2010)
The retained N-terminal methionine (Met) residue of a nascent protein is often N-terminally acetylated (Nt-acetylated). Removal of N-terminal Met by Met-aminopeptidases frequently leads to Nt-acetylation of the resulting N-terminal alanine (Ala), valine (Val), serine (Ser), threonine (Thr), and cysteine (Cys) residues. Although a majority of eukaryotic proteins (for example, more than 80% of human proteins) are cotranslationally Nt-acetylated, the function of this extensively studied modification is largely unknown. Using the yeast Saccharomyces cerevisiae, we found that the Nt-acetylated Met residue could act as a degradation signal (degron), targeted by the Doa10 ubiquitin ligase. Moreover, Doa10 also recognized the Nt-acetylated Ala, Val, Ser, Thr, and Cys residues. Several examined proteins of diverse functions contained these N-terminal degrons, termed AcN-degrons, which are a prevalent class of degradation signals in cellular proteins.