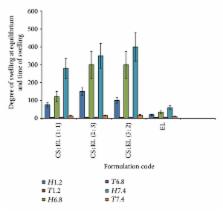 Colon-targeted drug delivery systems (CTDDSs) could be useful for local treatment of inflammatory bowel diseases (IBDs). In this study, various interpolyelectrolyte complexes (IPECs), formed between Eudragit RL100 (EL) and chitosan (CS), by nonstoichiometric method, and tablets based on the IPECs, prepared by wet granulation, were evaluated as potential oral CTDDSs for ibuprofen (IBF). Results obtained showed that the tablets conformed to compendial requirements for acceptance and that CS and EL formed IPECs that showed pH-dependent swelling properties and prolonged the in vitro release of IBF from the tablets in the following descending order: 3 : 2 > 2 : 3 > 1 : 1 ratios of CS and EL. An electrostatic interaction between the carbonyl (–CO–) group of EL and amino (–NH 3 +) group of CS of the tablets formulated with the IPECs was capable of preventing drug release in the stomach and small intestine and helped in delivering the drug to the colon. Kinetic analysis of drug release profiles showed that the systems predominantly released IBF in a zero-order manner. IPECs based on CS and EL could be exploited successfully for colon-targeted delivery of IBF in the treatment of IBDs.

Josias H Hamman (2010)
Chitosan has been the subject of interest for its use as a polymeric drug carrier material in dosage form design due to its appealing properties such as biocompatibility, biodegradability, low toxicity and relatively low production cost from abundant natural sources. However, one drawback of using this natural polysaccharide in modified release dosage forms for oral administration is its fast dissolution rate in the stomach. Since chitosan is positively charged at low pH values (below its pKa value), it spontaneously associates with negatively charged polyions in solution to form polyelectrolyte complexes. These chitosan based polyelectrolyte complexes exhibit favourable physicochemical properties with preservation of chitosan’s biocompatible characteristics. These complexes are therefore good candidate excipient materials for the design of different types of dosage forms. It is the aim of this review to describe complexation of chitosan with selected natural and synthetic polyanions and to indicate some of the factors that influence the formation and stability of these polyelectrolyte complexes. Furthermore, recent investigations into the use of these complexes as excipients in drug delivery systems such as nano- and microparticles, beads, fibers, sponges and matrix type tablets are briefly described.

M K Chourasia,  S. Jain (2015)
Although oral delivery has become a widely accepted route of administration of therapeutic drugs, the gastrointestinal tract presents several formidable barriers to drug delivery. Colonic drug delivery has gained increased importance not just for the delivery of the drugs for the treatment of local diseases associated with the colon but also for its potential for the delivery of proteins and therapeutic peptides. To achieve successful colonic delivery, a drug needs to be protected from absorption and /or the environment of the upper gastrointestinal tract (GIT) and then be abruptly released into the proximal colon, which is considered the optimum site for colon-targeted delivery of drugs. Colon targeting is naturally of value for the topical treatment of diseases of colon such as Chron's diseases, ulcerative colitis, colorectal cancer and amebiasis. Peptides, proteins, oligonucleotides and vaccines pose potential candidature for colon targeted drug delivery. The various strategies for targeting orally administered drugs to the colon include covalent linkage of a drug with a carrier, coating with pH-sensitive polymers, formulation of timed released systems, exploitation of carriers that are degraded specifically by colonic bacteria, bioadhesive systems and osmotic controlled drug delivery systems. Various prodrugs (sulfasalazine, ipsalazine, balsalazine and olsalazine) have been developed that are aimed to deliver 5-amino salicylic acid (5-ASA) for localized chemotherapy of inflammatory bowl disease (IBD). Microbially degradable polymers especially azo crosslinked polymers have been investigated for use in targeting of drugs to colon. Certain plant polysaccharides such as amylose, inulin, pectin and guar gum remains unaffected in the presence of gastrointestinal enzymes and pave the way for the formulation of colon targeted drug delivery systems. The concept of using pH as a rigger to release a drug in the colon is based on the pH conditions that vary continuously down the gastrointestinal tract. Times dependent drug delivery systems have been developed that are based on the principle to prevent release of drug until 3-4 h after leaving the stomach. Redox sensitive polymers and bioadhesive systems have also been exploited to deliver the drugs into the colon. The approach that is based on the formation of prodrug involves covalent linkage between drug and carrier. The type of linkage that is formed between drug and carrier would decide the triggering mechanism for the release of drug in colon. The presence of azo reductase enzymes play pivotal role in the release of drug from azo bond prodrugs while glycosidase activity of the colonic microflora is responsible for liberation of drugs from glycosidic prodrugs. Release of drugs from azo polymer coated dosage forms is supposed to take place after reduction and thus cleavage of the azo bonds by the azoreductase enzymes present in the colonic microflora. Natural polysaccharides have been used as tools to deliver the drugs specifically to the colon. These polysaccharides remain intact in the physiological environment of stomach and small intestine but once the dosage form enters into colon, it is acted upon by polysaccharidases, which degrades the polysaccharide and releases the drug into the vicinity of bioenvironment of colon. However, they should be protected while gaining entry into stomach and small intestine due to enormous swelling and hydrophilic properties of polysaccharides. This has been achieved either by chemical crosslinking or by addition of a protective coat. Formulation coated with enteric polymers releases drug when pH move towards alkaline range while as the multicoated formulation passes the stomach, the drug is released after a lag time of 3-5 h that is equivalent to small intestinal transit time. Drug coated with a bioadhesive polymer that selectively provides adhesion to the colonic mucosa may release drug in the colon. Improved drug delivery systems are required for drugs currently in use to treat localized diseases of the colon. The advantages of targeting drugs specifically to the diseased colon are reduced incidence of systemic side effects, lower dose of drug, supply of the drug to the biophase only when it is required and maintenance of the drug in its intact form as close as possible to the target site.

David Friend (2005)
Inflammatory bowel disease (IBD) is often localized to specific sites in the gastrointestinal tract (GIT). As a result, this disease can be treated with oral site-specific (targeted) drug delivery systems. Targeted delivery systems for treatment of IBD are designed to increase local tissue concentrations of antiinflammatory drugs from lower doses compared with systemic administration. This review addresses the impact disease has or may have on oral targeted delivery for treatment of IBD as well as a number of delivery approaches currently used in marketed products or under investigation. Delivery systems reviewed rely on temporal control, changes in pH along the GIT, the action of local enzymes to trigger drug release, and changes in intraluminal pressure. Dissolution of enteric polymer coatings due to a change in local pH and reduction of azo-bonds to release an active agent are both used in commercially marketed products. Newer approaches showing promise in treating IBD are based on polysaccharides. These materials are most effective when used as compression coatings around core tablets, which contain the active agent. More complex polymeric prodrugs systems are also under investigation. If the dose of the drug is sufficiently low, this approach may also prove useful in improving treatment of IBD.