Treatment with Saccharomyces boulardii and Escherichia coli Nissle is safe and associated with reduced nosocomial transmission of vanB vancomycin-resistant Enterococcus faecium on an early rehabilitation ward in Germany: a retrospective analysis 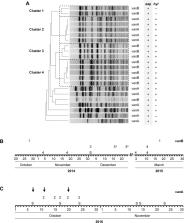 According to the WHO vancomycin-resistant Enterococcus faecium (VRE) belongs to the microorganisms for which new antibiotics are urgently needed. Depending on the type of vancomycin resistance vanA gene VRE is differentiated from vanB VRE and other types. In this retrospective analysis the results of VRE surveillance performed at a German tertiary hospital with approximately 1,200 beds between 2013 and 2017 are shown.

Rectal screening swabs were taken at admission and once per week on the early rehabilitation ward of Ingolstadt Hospital (ERWIN) but not at other wards. The number of VRE colonized patients was evaluated by using appropriate computer software (LabCentre, Hybase). The Hybase program was also used to find out the number of Saccharomyces boulardii and multi-susceptible Escherichia coli Nissle in blood cultures of patients at ERWIN. The mechanism of vancomycin resistance was examined by PCR and clonality of VRE strains was analyzed by pulsed-field gel electrophoresis.

Between 2013 and 2015 the number of VRE increased from 30 to 78 per year whereas in 2016 and 2017 the number declined to 51. Systematic analysis of the laboratory data revealed that this increase was driven by oligoclonal transmission of vanB VRE on ERWIN until August 2016 despite performing intensified infection control measures. However, afterward the number of VRE decreased at ERWIN and subsequently at the other wards. While searching for the reason behind this beneficial development we noticed that at ERWIN, patients treated with antibiotics received two probiotic medications simultaneously ( S. boulardii, E. coli Nissle) for the duration of the antibiotic therapy plus an additional 2 days. There was no indication of side effects caused by these microorganisms, particularly no infections.

Application of S. boulardii and E. coli Nissle was safe and associated with reduced transmission of VRE from patient to patient at ERWIN. Therefore, in our setting, probiotic treatment of patients receiving antibiotics contributed to the increase of patients’ safety.

Carles Ubeda,  Vanni Bucci,  Silvia Caballero … (2013)
Bacteria causing infections in hospitalized patients are increasingly antibiotic resistant. Classical infection control practices are only partially effective at preventing spread of antibiotic-resistant bacteria within hospitals. Because the density of intestinal colonization by the highly antibiotic-resistant bacterium vancomycin-resistant Enterococcus (VRE) can exceed 10(9) organisms per gram of feces, even optimally implemented hygiene protocols often fail. Decreasing the density of intestinal colonization, therefore, represents an important approach to limit VRE transmission. We demonstrate that reintroduction of a diverse intestinal microbiota to densely VRE-colonized mice eliminates VRE from the intestinal tract. While oxygen-tolerant members of the microbiota are ineffective at eliminating VRE, administration of obligate anaerobic commensal bacteria to mice results in a billionfold reduction in the density of intestinal VRE colonization. 16S rRNA gene sequence analysis of intestinal bacterial populations isolated from mice that cleared VRE following microbiota reconstitution revealed that recolonization with a microbiota that contains Barnesiella correlates with VRE elimination. Characterization of the fecal microbiota of patients undergoing allogeneic hematopoietic stem cell transplantation demonstrated that intestinal colonization with Barnesiella confers resistance to intestinal domination and bloodstream infection with VRE. Our studies indicate that obligate anaerobic bacteria belonging to the Barnesiella genus enable clearance of intestinal VRE colonization and may provide novel approaches to prevent the spread of highly antibiotic-resistant bacteria.

Meta-analysis of probiotics for the prevention of antibiotic associated diarrhea and the treatment of Clostridium difficile disease.

Kevin L. McFarland (2006)
Antibiotic-associated diarrhea (AAD) is a common complication of most antibiotics and Clostridium difficile disease (CDD), which also is incited by antibiotics, is a leading cause of nosocomial outbreaks of diarrhea and colitis. The use of probiotics for these two related diseases remains controversial. To compare the efficacy of probiotics for the prevention of AAD and the treatment of CDD based on the published randomized, controlled clinical trials. PubMed, Medline, Google Scholar, NIH registry of clinical trials, metaRegister, and Cochrane Central Register of Controlled Trials were searched from 1977 to 2005, unrestricted by language. Secondary searches of reference lists, authors, reviews, commentaries, associated diseases, books, and meeting abstracts. Trials were included in which specific probiotics given to either prevent or treat the diseases of interest. Trials were required to be randomized, controlled, blinded efficacy trials in humans published in peer-reviewed journals. Trials that were excluded were pre-clinical, safety, Phase 1 studies in volunteers, reviews, duplicate reports, trials of unspecified probiotics, trials of prebiotics, not the disease being studied, or inconsistent outcome measures. Thirty-one of 180 screened studies (totally 3,164 subjects) met the inclusion and exclusion criteria. One reviewer identified studies and abstracted data on sample size, population characteristics, treatments, and outcomes. From 25 randomized controlled trials (RCTs), probiotics significantly reduced the relative risk of AAD (RR = 0.43, 95% CI 0.31, 0.58, p < 0.001). From six randomized trials, probiotics had significant efficacy for CDD (RR = 0.59, 95% CI 0.41, 0.85, p = 0.005). A variety of different types of probiotics show promise as effective therapies for these two diseases. Using meta-analyses, three types of probiotics (Saccharomyces boulardii, Lactobacillus rhamnosus GG, and probiotic mixtures) significantly reduced the development of antibiotic-associated diarrhea. Only S. boulardii was effective for CDD.

A Systematic Review and Meta-analyses of the Clinical Epidemiology of Carbapenem-Resistant Enterobacteriaceae.

Karlijn van Loon,  Anne F. Voor in ‘t holt,  Margreet Vos (corresponding) (2017)
Carbapenem-resistant Enterobacteriaceae (CRE) are major health care-associated pathogens and responsible for hospital outbreaks worldwide. To prevent a further increase in CRE infections and to improve infection prevention strategies, it is important to summarize the current knowledge about CRE infection prevention in hospital settings. This systematic review aimed to identify risk factors for CRE acquisition among hospitalized patients. In addition, we summarized the environmental sources/reservoirs and the most successful infection prevention strategies related to CRE. A total of 3,983 potentially relevant articles were identified and screened. Finally, we included 162 studies in the systematic review, of which 69 studies regarding risk factors for CRE acquisition were included in the random-effects meta-analysis studies. The meta-analyses regarding risk factors for CRE acquisition showed that the use of medical devices generated the highest pooled estimate (odds ratio [OR] = 5.09; 95% confidence interval [CI] = 3.38 to 7.67), followed by carbapenem use (OR = 4.71; 95% CI = 3.54 to 6.26). To control hospital outbreaks, bundled interventions, including the use of barrier/contact precautions for patients colonized or infected with CRE, are needed. In addition, it is necessary to optimize the therapeutic approach, which is an important message to infectious disease specialists, who need to be actively involved in a timely manner in the treatment of patients with known CRE infections or suspected carriers of CRE.