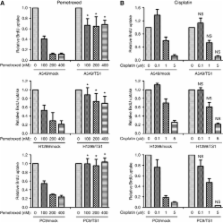 Although a high level of thymidylate synthase (TS) expression in malignant tumours has been suggested to be related to a reduced sensitivity to the antifolate drug pemetrexed, no direct evidence for such an association has been demonstrated in non-small cell lung cancer (NSCLC). We have now investigated the effect of TS overexpression on pemetrexed sensitivity in NSCLC cells.

We established NSCLC cell lines that stably overexpress TS and examined the effects of such overexpression on the cytotoxicity of pemetrexed both in vitro and in xenograft models. We further examined the relation between TS expression in tumour specimens from NSCLC patients and the tumour response to pemetrexed by immunohistochemical analysis.

The sensitivity of NSCLC cells overexpressing TS to the antiproliferative effect of pemetrexed was markedly reduced compared with that of control cells. The inhibition of DNA synthesis and induction of apoptosis by pemetrexed were also greatly attenuated by forced expression of TS. Furthermore, tumours formed by TS-overexpressing NSCLC cells in nude mice were resistant to the growth-inhibitory effect of pemetrexed observed with control tumours. Finally, the level of TS expression in tumours of non-responding patients was significantly higher than that in those of responders, suggestive of an inverse correlation between TS expression and tumour response to pemetrexed.

Philip C. Hoffman,  Ann M Mauer,  Everett E. Vokes (2000)
Lung cancer remains a major worldwide health problem, accounting for more than a sixth of cancer deaths. The proportion of cancers that are adenocarcinomas is increasing in North America and to some degree in Europe, leading to a changing clinical picture characterised by early development of metastases. Newer diagnostic techniques have allowed for more accurate tumour staging and treatment planning. In patients with non-small-cell cancer, surgical resection offers substantial cure rates in early-stage cases. Combined chemotherapy plus radiation therapy has clearly improved the treatment results for patients with locally advanced cancers, and patients with metastatic disease are now candidates for newer chemotherapy regimens with more favourable results than in the past. Small-cell lung cancer is highly responsive to chemotherapy, and recent advances in radiation therapy have improved the prospects for long survival. New techniques for screening, and innovative approaches to both local and systemic treatment offer hope for substantial progress against this disease in the near future.

W Köhler,  D J Soose,  Kushang V. Patel … (1997)
N-[4-[2-(2-amino-3,4-dihydro-4-oxo-7H-pyrrolo[2,3-d]pyrimidin-5-yl)ethyl ]-benzoyl]-L-glutamic acid (LY231514) is a novel pyrrolo[2,3-d]pyrimidine-based antifolate currently undergoing extensive Phase II clinical trials. Previous studies have established that LY231514 and its synthetic gamma-polyglutamates (glu3 and glu5) exert potent inhibition against thymidylate synthase (TS). We now report that LY231514 and its polyglutamates also markedly inhibit other key folate-requiring enzymes, including dihydrofolate reductase (DHFR) and glycinamide ribonucleotide formyltransferase (GARFT). For example, the Ki values of the pentaglutamate of LY231514 are 1.3, 7.2, and 65 nM for inhibition against TS, DHFR, and GARFT, respectively. In contrast, although a similar high level of inhibitory potency was observed for the parent monoglutamate against DHFR (7.0 nM), the inhibition constants (Ki) for the parent monoglutamate are significantly weaker for TS (109 nM) and GARFT (9,300 nM). The effects of LY231514 and its polyglutamates on aminoimidazole carboxamide ribonucleotide formyltransferase, 5,10-methylenetetrahydrofolate dehydrogenase, and 10-formyltetrahydrofolate synthetase were also evaluated. The end product reversal studies conducted in human cell lines further support the concept that multiple enzyme-inhibitory mechanisms are involved in cytotoxicity. The reversal pattern of LY231514 suggests that although TS may be a major site of action for LY231514 at concentrations near the IC50, higher concentrations can lead to inhibition of DHFR and/or other enzymes along the purine de novo pathway. Studies with mutant cell lines demonstrated that LY231514 requires polyglutamation and transport via the reduced folate carrier for cytotoxic potency. Therefore, our data suggest that LY231514 is a novel classical antifolate, the antitumor activity of which may result from simultaneous and multiple inhibition of several key folate-requiring enzymes via its polyglutamated metabolites.