Reasons for lithium discontinuation in men and women with bipolar disorder: a retrospective cohort study 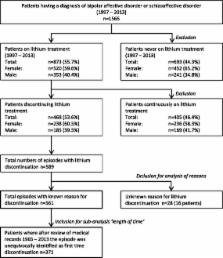 Lithium remains first choice as maintenance treatment for bipolar affective disorder. Yet, about half of all individuals may stop their treatment at some point, despite lithium’s proven benefits concerning the prevention of severe affective episodes and suicide.

Retrospective cohort study in the Swedish region of Norrbotten into the causes of lithium discontinuation. The study was set up to (1) test whether patients with bipolar affective disorder or schizoaffective disorder, treated with lithium maintenance therapy, were more likely to discontinue lithium because of adverse effects than lack of therapeutic effectiveness, (2) explore gender differences, (3) understand the role of diagnosis and (4) identify who, patient or doctor, took the initiative to stop lithium. Review of medical records for all episodes of lithium discontinuation that had occurred between 1997 and 2013 with the intent to stop lithium for good.

Lithium plus valproate combination therapy versus monotherapy for relapse prevention in bipolar I disorder (BALANCE): a randomised open-label trial.

Shon Lewis,  Andrea Cipriani,  Seena Fazel (2010)
Lithium carbonate and valproate semisodium are both recommended as monotherapy for prevention of relapse in bipolar disorder, but are not individually fully effective in many patients. If combination therapy with both agents is better than monotherapy, many relapses and consequent disability could be avoided. We aimed to establish whether lithium plus valproate was better than monotherapy with either drug alone for relapse prevention in bipolar I disorder. 330 patients aged 16 years and older with bipolar I disorder from 41 sites in the UK, France, USA, and Italy were randomly allocated to open-label lithium monotherapy (plasma concentration 0.4-1.0 mmol/L, n=110), valproate monotherapy (750-1250 mg, n=110), or both agents in combination (n=110), after an active run-in of 4-8 weeks on the combination. Randomisation was by computer program, and investigators and participants were informed of treatment allocation. All outcome events were considered by the trial management team, who were masked to treatment assignment. Participants were followed up for up to 24 months. The primary outcome was initiation of new intervention for an emergent mood episode, which was compared between groups by Cox regression. Analysis was by intention to treat. This study is registered, number ISRCTN 55261332. 59 (54%) of 110 people in the combination therapy group, 65 (59%) of 110 in the lithium group, and 76 (69%) of 110 in the valproate group had a primary outcome event during follow-up. Hazard ratios for the primary outcome were 0.59 (95% CI 0.42-0.83, p=0.0023) for combination therapy versus valproate, 0.82 (0.58-1.17, p=0.27) for combination therapy versus lithium, and 0.71 (0.51-1.00, p=0.0472) for lithium versus valproate. 16 participants had serious adverse events after randomisation: seven receiving valproate monotherapy (three deaths); five lithium monotherapy (two deaths); and four combination therapy (one death). For people with bipolar I disorder, for whom long-term therapy is clinically indicated, both combination therapy with lithium plus valproate and lithium monotherapy are more likely to prevent relapse than is valproate monotherapy. This benefit seems to be irrespective of baseline severity of illness and is maintained for up to 2 years. BALANCE could neither reliably confirm nor refute a benefit of combination therapy compared with lithium monotherapy. Stanley Medical Research Institute; Sanofi-Aventis. Copyright 2010 Elsevier Ltd. All rights reserved.

Lithium side effects and toxicity: prevalence and management strategies

Michael Gitlin (2016)
Despite its virtually universal acceptance as the gold standard in treating bipolar disorder, prescription rates for lithium have been decreasing recently. Although this observation is multifactorial, one obvious potential contributor is the side effect and toxicity burden associated with lithium. Additionally, side effect concerns assuredly play some role in lithium nonadherence. This paper summarizes the knowledge base on side effects and toxicity and suggests optimal management of these problems. Thirst and excessive urination, nausea and diarrhea and tremor are rather common side effects that are typically no more than annoying even though they are rather prevalent. A simple set of management strategies that involve the timing of the lithium dose, minimizing lithium levels within the therapeutic range and, in some situations, the prescription of side effect antidotes will minimize the side effect burden for patients. In contrast, weight gain and cognitive impairment from lithium tend to be more distressing to patients, more difficult to manage and more likely to be associated with lithium nonadherence. Lithium has adverse effects on the kidneys, thyroid gland and parathyroid glands, necessitating monitoring of these organ functions through periodic blood tests. In most cases, lithium-associated renal effects are relatively mild. A small but measurable percentage of lithium-treated patients will show progressive renal impairment. Infrequently, lithium will need to be discontinued because of the progressive renal insufficiency. Lithium-induced hypothyroidism is relatively common but easily diagnosed and treated. Hyperparathyroidism from lithium is a relatively more recently recognized phenomenon.