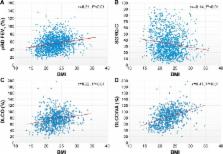 FEV 1 and the diffusing capacity of the lung for carbon monoxide (DLCO) percentage revealed an inverse “U”-shaped pattern as the BMI groups changed from underweight to obese when WHO cutoffs were applied. When Asia-Pacific cutoffs were applied, FEV 1 and DLCO (%) exhibited a linearly ascending relationship as the BMI increased, and the percentage of patients in the overweight and obese groups linearly decreased with increasing severity of the Global Initiative for Chronic Obstructive Lung Disease criteria. From the underweight to the overweight groups, SGRQ-C and mMRC had a decreasing relationship in both the WHO and Asia-Pacific classifications. The prevalence of comorbidities in the different BMI groups showed similar trends in both BMI classifications systems.

The present study demonstrated that patients with COPD who have a high BMI have better pulmonary function and health-related quality of life and reduced dyspnea symptoms. Furthermore, the Asia-Pacific BMI classification more appropriately reflects the correlation of obesity and disease manifestation in Asian COPD patients than the WHO classification.

Body-mass index and mortality in Korean men and women.

Jae Sull,  Sun Jee,  Heechoul Ohrr … (2006)
Obesity is associated with diverse health risks, but the role of body weight as a risk factor for death remains controversial. We examined the association between body weight and the risk of death in a 12-year prospective cohort study of 1,213,829 Koreans between the ages of 30 and 95 years. We examined 82,372 deaths from any cause and 48,731 deaths from specific diseases (including 29,123 from cancer, 16,426 from atherosclerotic cardiovascular disease, and 3362 from respiratory disease) in relation to the body-mass index (BMI) (the weight in kilograms divided by the square of the height in meters). In both sexes, the average baseline BMI was 23.2, and the rate of death from any cause had a J-shaped association with the BMI, regardless of cigarette-smoking history. The risk of death from any cause was lowest among patients with a BMI of 23.0 to 24.9. In all groups, the risk of death from respiratory causes was higher among subjects with a lower BMI, and the risk of death from atherosclerotic cardiovascular disease or cancer was higher among subjects with a higher BMI. The relative risk of death associated with BMI declined with increasing age. Underweight, overweight, and obese men and women had higher rates of death than men and women of normal weight. The association of BMI with death varied according to the cause of death and was modified by age, sex, and smoking history. Copyright 2006 Massachusetts Medical Society.