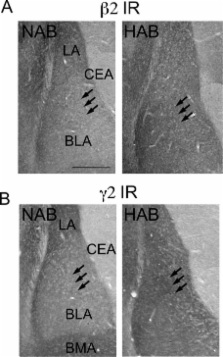 Anxiety disorders are the most prevalent central nervous system diseases imposing a high social burden to our society. Emotional processing is particularly controlled by GABA-ergic transmission in the amygdala. Using in situ hybridization and immunohistochemistry we now investigated changes in the expression of GABA synthesizing enzymes (GAD65 and GAD67), GABA A (α1–5, β1–3, γ1–2) and GABA B receptor subunits (GBBR1, GBBR2) in amygdaloid nuclei of high anxiety-related behavior (HAB) mice in comparison to mice selected for normal anxiety-related behavior (NAB). Levels of GAD65 and GAD67 mRNAs and protein, as well as those of GABA were increased in the amygdala of HAB mice. Relative to NAB controls, mRNA expression of the GABA A receptor subunits β1, β2 and γ2 was specifically increased in the basolateral amygdala of HAB mice while transcription of α5 and γ1 subunits was reduced in the central and medial amygdala. On the protein level, increases in β2 and γ2 subunit immunoreactivities were evident in the basolateral amygdala of HAB mice. No change in GABA B receptor expression was observed. These findings point towards an imbalanced GABA-ergic neurotransmission in the amygdala of HAB mice. On the other hand, FosB, a marker for neuronal activity, was increased in principal neurons of the basolateral amygdala in HAB mice, reflecting activation of excitatory neurons, possibly as a consequence of reduced GABA-ergic tonic inhibition through α5 and γ1 containing receptors. Ultimately these mechanisms may lead to the compensatory activation of GABA transmission, as indicated by the increased expression of GAD65/67 in HAB mice.

▶Mice with increased trait anxiety revealed: ▶Increased activity of principal neurons of the basolateral amygdala. ▶A compensatory increase of glutamate decarboxylase expression. ▶Differential alterations of GABA A receptor subunit expression in the amygdala.

The use of a plus-maze to measure anxiety in the mouse.

R Lister (1986)
To investigate whether an elevated plus-maze consisting of two open and two closed arms could be used as a model of anxiety in the mouse, NIH Swiss mice were tested in the apparatus immediately after a holeboard test. Factor analysis of data from undrugged animals tested in the holeboard and plus-maze yielded three orthogonal factors interpreted as assessing anxiety, directed exploration and locomotion. Anxiolytic drugs (chlordiazepoxide, sodium pentobarbital and ethanol) increased the proportion of time spent on the open arms, and anxiogenic drugs (FG 7142, caffeine and picrotoxin) reduced this measure. Amphetamine and imipramine failed to alter the indices of anxiety. The anxiolytic effect of chlordiazepoxide was reduced in mice that had previously experienced the plus-maze in an undrugged state. Testing animals in the holeboard immediately before the plus-maze test significantly elevated both the percentage of time spent on the open arms and the total number of arm entries, but did not affect the behavioral response to chlordiazepoxide. The plus-maze appears to be a useful test with which to investigate both anxiolytic and anxiogenic agents.

GABA A receptors: subtypes provide diversity of function and pharmacology.

Werner Sieghart,  Kenneth Olsen (2008)
This mini-review attempts to update experimental evidence on the existence of GABA(A) receptor pharmacological subtypes and to produce a list of those native receptors that exist. GABA(A) receptors are chloride channels that mediate inhibitory neurotransmission. They are members of the Cys-loop pentameric ligand-gated ion channel (LGIC) superfamily and share structural and functional homology with other members of that family. They are assembled from a family of 19 homologous subunit gene products and form numerous receptor subtypes with properties that depend upon subunit composition, mostly hetero-oligomeric. These vary in their regulation and developmental expression, and importantly, in brain regional, cellular, and subcellular localization, and thus their role in brain circuits and behaviors. We propose several criteria for including a receptor hetero-oligomeric subtype candidate on a list of native subtypes, and a working GABA(A) receptor list. These criteria can be applied to all the members of the LGIC superfamily. The list is divided into three categories of native receptor subtypes: "Identified", "Existence with High Probability", and "Tentative", and currently includes 26 members, but will undoubtedly grow, with future information. This list was first presented by Olsen & Sieghart (in press).

Measuring normal and pathological anxiety-like behaviour in mice: a review.

Catherine Belzung,  Guy Griebel (2001)
Measuring anxiety-like behaviour in mice has been mostly undertaken using a few classical animal models of anxiety such as the elevated plus-maze, the light/dark choice or the open-field tests. All these procedures are based upon the exposure of subjects to unfamiliar aversive places. Anxiety can also be elicited by a range of threats such as predator exposure. Furthermore, the concepts of "state" and "trait" anxiety have been proposed to differentiate anxiety that the subject experiences at a particular moment of time and that is increased by the presence of an anxiogenic stimulus, and anxiety that does not vary from moment to moment and is considered to be an "enduring feature of an individual". Thus, when assessing the behaviour of mice, it is necessary to increase the range of behavioural paradigms used, including animal models of "state" and "trait" anxiety. In the last few years, many mice with targeted mutations have been generated. Among them some have been proposed as animal models of pathological anxiety, since they display high level of anxiety-related behaviours in classical tests. However, it is important to emphasise that such mice are animal models of a single gene dysfunction, rather than models of anxiety, per se. Inbred strains of mice, such as the BALB/c line, which exhibits spontaneously elevated anxiety appear to be a more suitable model of pathological anxiety.