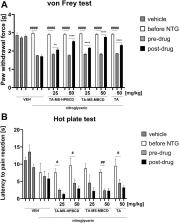 Increasing solubility of TA caused an increase of its analgesic effect in an animal model of migraine pain.

Characterization of a novel model of chronic migraine.

Amynah A A Pradhan,  Monique Smith,  Brenna McGuire … (2014)
Chronic migraine is a disabling condition that affects hundreds of millions of individuals worldwide. The development of novel migraine treatments has been slow, in part as a result of a lack of predicative animal models. We have developed a new model of chronic migraine involving the use of nitroglycerin (NTG), a known migraine trigger in humans. Chronic intermittent administration of NTG to mice resulted in acute mechanical hyperalgesia with each exposure as well as a progressive and sustained basal hyperalgesia. This chronic basal hyperalgesia occurred in a dose-dependent fashion and persisted for days after cessation of NTG administration. NTG-evoked hyperalgesia was exacerbated by the phosphodiesterase 5 inhibitor sildenafil, also a human migraine trigger, consistent with nitric oxide as a primary mediator of this hyperalgesia. The acute but not the chronic basal hyperalgesia was significantly reduced by the acute migraine therapy sumatriptan, whereas both the acute and chronic hyperalgesia was significantly attenuated by the migraine preventive therapy topiramate. Chronic NTG-induced hyperalgesia is a mouse model that may be useful for the study of mechanisms underlying progression of migraine from an episodic to a chronic disorder, and for the identification and characterization of novel acute and preventive migraine therapies.

Neurogenic inflammation and its role in migraine.

Roshni Ramachandran (2018)
The etiology of migraine pain involves sensitized meningeal afferents that densely innervate the dural vasculature. These afferents, with their cell bodies located in the trigeminal ganglion, project to the nucleus caudalis, which in turn transmits signals to higher brain centers. Factors such as chronic stress, diet, hormonal fluctuations, or events like cortical spreading depression can generate a state of "sterile inflammation" in the intracranial meninges resulting in the sensitization and activation of trigeminal meningeal nociceptors. This sterile inflammatory phenotype also referred to as neurogenic inflammation is characterized by the release of neuropeptides (such as substance P, calcitonin gene related peptide) from the trigeminal innervation. This release leads to vasodilation, plasma extravasation secondary to capillary leakage, edema, and mast cell degranulation. Although neurogenic inflammation has been observed and extensively studied in peripheral tissues, its role has been primarily investigated in the genesis and maintenance of migraine pain. While some aspects of neurogenic inflammation has been disregarded in the occurrence of migraine pain, targeted analysis of factors have opened up the possibilities of a dialogue between the neurons and immune cells in driving such a sterile neuroinflammatory state in migraine pathophysiology.

John Wallace (2013)
This article reviews the latest developments in understanding the pathogenesis, detection and treatment of small intestinal damage and bleeding caused by nonsteroidal anti-inflammatory drugs (NSAIDs). With improvements in the detection of NSAID-induced damage in the small intestine, it is now clear that this injury and the associated bleeding occurs more frequently than that occurring in the stomach and duodenum, and can also be regarded as more dangerous. However, there are no proven-effective therapies for NSAID-enteropathy, and detection remains a challenge, particularly because of the poor correlation between tissue injury and symptoms. Moreover, recent studies suggest that commonly used drugs for protecting the upper gastrointestinal tract (i.e., proton pump inhibitors) can significantly worsen NSAID-induced damage in the small intestine. The pathogenesis of NSAID-enteropathy is complex, but studies in animal models are shedding light on the key factors that contribute to ulceration and bleeding, and are providing clues to the development of effective therapies and prevention strategies. Novel NSAIDs that do not cause small intestinal damage in animal models offer hope for a solution to this serious adverse effect of one of the most widely used classes of drugs.