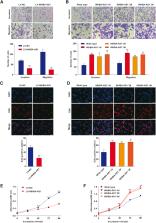 Preeclampsia is believed to be caused by impaired placentation with insufficient trophoblast invasion, leading to impaired uterine spiral artery remodeling and angiogenesis. However, the underlying molecular mechanism remains unknown. We recently carried out transcriptome profiling of placental long noncoding RNAs (lncRNAs) and identified 383 differentially expressed lncRNAs in early-onset severe preeclampsia. Here, we are reporting our identification of lncRNA INHBA-AS1 as a potential causal factor of preeclampsia and its downstream pathways that may be involved in placentation. We found that INHBA-AS1 was upregulated in patients and positively correlated with clinical severity. We systematically searched for potential INHBA-AS1-binding transcription factors and their targets in databases and found that the targets were enriched with differentially expressed genes in the placentae of patients. We further demonstrated that the lncRNA INHBA-AS1 inhibited the invasion and migration of trophoblast cells through restraining the transcription factor CENPB from binding to the promoter of TNF receptor-associated factor 1 ( TRAF1). Therefore, we have identified the dysregulated pathway “ INHBA-AS1-CENPB-TRAF1” as a contributor to the pathogenesis of preeclampsia through prohibiting the proliferation, invasion, and migration of trophoblasts during placentation. 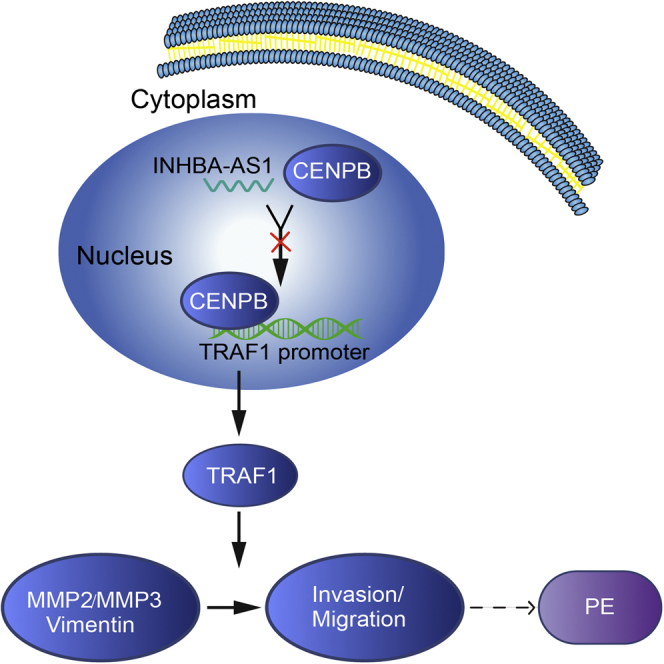 Preeclampsia is believed to be caused by impaired placentation. Xinping Yang and colleagues report the identification of lncRNA INHBA-AS1 as a potential causal factor of preeclampsia. They found that INHBA-AS1 is positively correlated with clinical severity and involved in the pathogenesis through inhibiting the invasion and migration of trophoblast cells.

Piya Chaemsaithong,  Frederico Romero,  Lami Yeo … (2014)
Pre-eclampsia is characterized by new-onset hypertension and proteinuria at ≥20 weeks of gestation. In the absence of proteinuria, hypertension together with evidence of systemic disease (such as thrombocytopenia or elevated levels of liver transaminases) is required for diagnosis. This multisystemic disorder targets several organs, including the kidneys, liver and brain, and is a leading cause of maternal and perinatal morbidity and mortality. Glomeruloendotheliosis is considered to be a characteristic lesion of pre-eclampsia, but can also occur in healthy pregnant women. The placenta has an essential role in development of this disorder. Pathogenetic mechanisms implicated in pre-eclampsia include defective deep placentation, oxidative and endoplasmic reticulum stress, autoantibodies to type-1 angiotensin II receptor, platelet and thrombin activation, intravascular inflammation, endothelial dysfunction and the presence of an antiangiogenic state, among which an imbalance of angiogenesis has emerged as one of the most important factors. However, this imbalance is not specific to pre-eclampsia, as it also occurs in intrauterine growth restriction, fetal death, spontaneous preterm labour and maternal floor infarction (massive perivillous fibrin deposition). The severity and timing of the angiogenic imbalance, together with maternal susceptibility, might determine the clinical presentation of pre-eclampsia. This Review discusses the diagnosis, classification, clinical manifestations and putative pathogenetic mechanisms of pre-eclampsia.

A study of placental bed spiral arteries and trophoblast invasion in normal and severe pre-eclamptic pregnancies.

Yixue Li,  Guo-Qing Yang,  Kang Tu … (2008)
Investigation of transcription factors (TFs) and their downstream regulated genes (targets) is a significant issue in post-genome era, which can provide a brand new vision for some vital biological process. However, information of TFs and their targets in mammalian is far from sufficient. Here, we developed an integrated TF platform (ITFP), which included abundant TFs and their targets of mammalian. In current release, ITFP includes 4105 putative TFs and 69 496 potential TF-target pairs for human, 3134 putative TFs and 37 040 potential TF-target pairs for mouse, and 1114 putative TFs and 18 055 potential TF-target pairs for rat. In short, ITFP will serve as an important resource for the research community of transcription and provide strong support for regulatory network study.