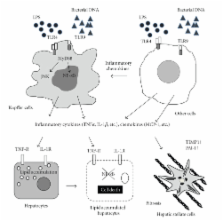 Activation of innate immunity is associated with the development of liver disease, including non-alcoholic fatty liver disease (NAFLD). In the innate immune system, Toll-like receptors (TLRs) are sensors that recognize bacterial and viral components such as lipopolysaccharide, bacterial DNA, and peptidoglycan. Recent data have demonstrated that the liver is exposed to a high load of TLR ligands due to bacterial overgrowth and increased intestinal permeability in NAFLD. Upon stimulation by these TLR ligands, hepatic immune cells produce various mediators that are involved in host defense. On the other hand, these mediators alter lipid metabolism, insulin signaling, and cell survival. Indeed, some TLR-deficient mice demonstrate lesser degrees of NAFLD even though TLR ligands are increased. This paper will highlight the recent progress on the study of TLR signaling and their downstream molecules in the development of NAFLD.

The gut microbiota as an environmental factor that regulates fat storage.

Jeffrey Gordon,  Lora Hooper,  Hao Ding … (2004)
New therapeutic targets for noncognitive reductions in energy intake, absorption, or storage are crucial given the worldwide epidemic of obesity. The gut microbial community (microbiota) is essential for processing dietary polysaccharides. We found that conventionalization of adult germ-free (GF) C57BL/6 mice with a normal microbiota harvested from the distal intestine (cecum) of conventionally raised animals produces a 60% increase in body fat content and insulin resistance within 14 days despite reduced food intake. Studies of GF and conventionalized mice revealed that the microbiota promotes absorption of monosaccharides from the gut lumen, with resulting induction of de novo hepatic lipogenesis. Fasting-induced adipocyte factor (Fiaf), a member of the angiopoietin-like family of proteins, is selectively suppressed in the intestinal epithelium of normal mice by conventionalization. Analysis of GF and conventionalized, normal and Fiaf knockout mice established that Fiaf is a circulating lipoprotein lipase inhibitor and that its suppression is essential for the microbiota-induced deposition of triglycerides in adipocytes. Studies of Rag1-/- animals indicate that these host responses do not require mature lymphocytes. Our findings suggest that the gut microbiota is an important environmental factor that affects energy harvest from the diet and energy storage in the host. Data deposition: The sequences reported in this paper have been deposited in the GenBank database (accession nos. AY 667702--AY 668946).

Thierry Sulpice,  Claude Knauf,  Marie-Christine Alessi … (2007)
Diabetes and obesity are two metabolic diseases characterized by insulin resistance and a low-grade inflammation. Seeking an inflammatory factor causative of the onset of insulin resistance, obesity, and diabetes, we have identified bacterial lipopolysaccharide (LPS) as a triggering factor. We found that normal endotoxemia increased or decreased during the fed or fasted state, respectively, on a nutritional basis and that a 4-week high-fat diet chronically increased plasma LPS concentration two to three times, a threshold that we have defined as metabolic endotoxemia. Importantly, a high-fat diet increased the proportion of an LPS-containing microbiota in the gut. When metabolic endotoxemia was induced for 4 weeks in mice through continuous subcutaneous infusion of LPS, fasted glycemia and insulinemia and whole-body, liver, and adipose tissue weight gain were increased to a similar extent as in high-fat-fed mice. In addition, adipose tissue F4/80-positive cells and markers of inflammation, and liver triglyceride content, were increased. Furthermore, liver, but not whole-body, insulin resistance was detected in LPS-infused mice. CD14 mutant mice resisted most of the LPS and high-fat diet-induced features of metabolic diseases. This new finding demonstrates that metabolic endotoxemia dysregulates the inflammatory tone and triggers body weight gain and diabetes. We conclude that the LPS/CD14 system sets the tone of insulin sensitivity and the onset of diabetes and obesity. Lowering plasma LPS concentration could be a potent strategy for the control of metabolic diseases.

Obesity is associated with macrophage accumulation in adipose tissue.