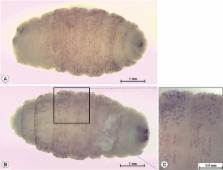 A fly larva was recovered from a boil-like lesion on the left leg of a 33-year-old male on 21 November 2016. He has worked in an endemic area of myiasis, Uganda, for 8 months and returned to Korea on 11 November 2016. The larva was identified as Cordylobia anthropophaga by morphological features, including the body shape, size, anterior end, posterior spiracles, and pattern of spines on the body. Subsequent 28S rRNA gene sequencing showed 99.9% similarity (916/917 bp) with the partial 28S rRNA gene of C. anthropophaga. This is the first imported case of furuncular myiasis caused by C. anthropophaga in a Korean overseas traveler.

Myiasis in Man and Animals in the Old World

Cutaneous myiasis: a review of the common types of myiasis.

Amor Khachemoune,  K. Robbins (2010)
Myiasis is derived from the Greek word, myia, meaning fly. The term was first introduced by Hope in 1840 and refers to the infestation of live human and vertebrate animals with dipterous (two-winged) larvae (maggots) which, at least for a certain period, feed on the host's dead or living tissue, liquid body-substance, or ingested food. Myiasis is the fourth most common travel-associated skin disease and cutaneous myiasis is the most frequently encountered clinical form. Cutaneous myiasis can be divided into three main clinical manifestations: furuncular, creeping (migratory), and wound (traumatic) myiasis. The flies that produce a furuncular myiasis include Dermatobia hominis, Cordylobia anthropophaga, Wohlfahrtia vigil, and the Cuterebra species. Gasterophilus and Hypoderma are two flies that produce a creeping myiasis. Flies that cause wound myiasis include screwworm flies such as Cochliomyia hominivorax and Chrysomya bezziana, and Wohlfahrtia magnifica. This article reviews current literature, provides general descriptions, and discusses life cycles of each species. It also gives treatment techniques and descriptions of each type of illness that results from interaction/infestation. © 2010 The International Society of Dermatology.

Molecular approaches to the study of myiasis-causing larvae.

Domenico Otranto,  Jamie R Stevens (2002)
Among arthropod diseases affecting animals, larval infections - myiases - of domestic and wild animals have been considered important since ancient times. Besides the significant economic losses to livestock worldwide, myiasis-causing larvae have attracted the attention of scientists because some parasitise humans and are of interest in forensic entomology. In the past two decades, the biology, epidemiology, immunology, immunodiagnosis and control methods of myiasis-causing larvae have been focused on and more recently the number of molecular studies have also begun to increase. The 'new technologies' (i.e. molecular biology) are being used to study taxonomy, phylogenesis, molecular identification, diagnosis (recombinant antigens) and vaccination strategies. In particular, more in depth molecular studies have now been performed on Sarcophagidae, Calliphoridae and flies of the Oestridae sister group. This review discusses the most topical issues and recent studies on myiasis-causing larvae using molecular approaches. In the first part, PCR-based techniques and the genes that have already been analysed, or are potentially useful for the molecular phylogenesis and identification of myiasis-causing larvae, are described. The second section deals with the more recent advances concerning taxonomy, phylogenetics, population studies, molecular identification, diagnosis and vaccination.