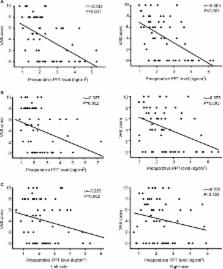 Postlaparoscopic shoulder pain (PLSP) remains a common problem after laparoscopies. The aim of this study was to investigate the correlation between pressure pain threshold (PPT) of different muscles and PLSP after gynecologic laparoscopy, and to explore the effect of parecoxib, a cyclooxygenase-2 inhibitor, on the changes of PPT.

The patients were randomly allocated into two groups; group P and group C. In group P, parecoxib 40 mg was intravenously infused at 30 minutes before surgery and 8 and 20 hours after surgery. In group C, normal saline was infused at the corresponding time point. PPT assessment was performed 1 day before surgery and at postoperative 24 hours by using a pressure algometer at bilateral shoulder muscles (levator scapulae and supraspinatus) and forearm (flexor carpi ulnaris). Meanwhile, bilateral shoulder pain was evaluated through visual analog scale score at 24 hours after surgery.

Preoperative PPT level of the shoulder, but not of the forearm, was significantly and negatively correlated with the intensity of ipsilateral PLSP. In group C, PPT levels of shoulder muscles, but not of forearm muscles, decreased after laparoscopy at postoperative 24 hours. The use of parecoxib significantly improved the decline of PPT levels of bilateral shoulder muscles (all P<0.01). Meanwhile, parecoxib reduced the incidence of PLSP (group P: 45% vs group C: 83.3%; odds ratio: 0.164; 95% confidence interval: 0.07–0.382; P<0.001) and the intensity of bilateral shoulder pain (both P<0.01).

Elise Whitley,  Jonathan Ball (2002)
The present review introduces the notion of statistical power and the hazard of under-powered studies. The problem of how to calculate an ideal sample size is also discussed within the context of factors that affect power, and specific methods for the calculation of sample size are presented for two common scenarios, along with extensions to the simplest case.

Characteristics and prediction of early pain after laparoscopic cholecystectomy.

Laparoscopic surgery is not inherently dangerous for patients presenting with benign gynaecologic pathology. Results of a meta-analysis.

C Chapron,  G. Breart,  J. B. Dubuisson … (2002)
Laparoscopic surgery presents a large number of advantages over laparotomy. The goal of this work was to check whether these benefits outweigh any greater risk of complications. The study design was a meta-analysis of published data from prospective randomized clinical trials (RCT). For the period 1966 to June 2000 we searched Medline and Cochrane Controlled Trial Registers and asked the investigators for further details. Meta-analysis was carried out with the Cochrane review manager software RevMan 4.1. A total of 27 prospective RCT including 3611 women (1809 treated by operative laparoscopy and 1802 treated by laparotomy) were enrolled in the meta-analysis. The overall risk of complications was significantly lower for patients operated by laparoscopic surgery [relative risk (RR) 0.59; 95% confidence interval (CI) 0.50-0.70]. There was no statistically significant difference concerning the risk of major complications with respect to the approach used (RR 1.0; 95% CI 0.60-1.65). The risk of minor complications was significantly lower for patients operated by laparoscopic surgery (RR 0.55; 95% CI 0.45-0.66). Concerning the risks of readmission, second procedure and blood transfusion, there was no difference between the two groups. Identical results were found when we performed a sensitivity analysis including or excluding studies according to the methodological score. Subgroup analysis according to how serious the surgery was (minor, major, advanced) showed a significant increase in the risk of transfusion for advanced procedures performed by laparotomy. Laparoscopic surgery is not inherently dangerous for patients presenting benign gynaecological pathologies. The potential risk of complications should no longer be advanced as an argument against using laparoscopic surgery rather than laparotomy for an operation when the indication allows the choice.