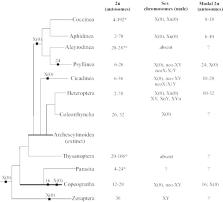 This article is part (the 4 th article) of the themed issue (a monograph) “Aberrant cytogenetic and reproductive patterns in the evolution of Paraneoptera ”. The purpose of this article is to consider chromosome structure and evolution, chromosome numbers and sex chromosome systems, which all together constitute the chromosomal basis of reproduction and are essential for reproductive success. We are based on our own observations and literature data available for all major lineages of Paraneoptera including Zoraptera (angel insects), Copeognatha (= Psocoptera ; bark lice), Parasita (= Phthiraptera s. str; true lice), Thysanoptera (thrips), Homoptera (scale insects, aphids, jumping plant-lice, whiteflies, and true hoppers), Heteroptera (true bugs), and Coleorrhyncha (moss bugs). Terminology, nomenclature, classification, and the study methods are given in the first paper of the issue ( Gavrilov-Zimin et al. 2021).

Genome sequences of the human body louse and its primary endosymbiont provide insights into the permanent parasitic lifestyle.

E Kirkness,  B. J. Haas,  W. Sun … (2010)
As an obligatory parasite of humans, the body louse (Pediculus humanus humanus) is an important vector for human diseases, including epidemic typhus, relapsing fever, and trench fever. Here, we present genome sequences of the body louse and its primary bacterial endosymbiont Candidatus Riesia pediculicola. The body louse has the smallest known insect genome, spanning 108 Mb. Despite its status as an obligate parasite, it retains a remarkably complete basal insect repertoire of 10,773 protein-coding genes and 57 microRNAs. Representing hemimetabolous insects, the genome of the body louse thus provides a reference for studies of holometabolous insects. Compared with other insect genomes, the body louse genome contains significantly fewer genes associated with environmental sensing and response, including odorant and gustatory receptors and detoxifying enzymes. The unique architecture of the 18 minicircular mitochondrial chromosomes of the body louse may be linked to the loss of the gene encoding the mitochondrial single-stranded DNA binding protein. The genome of the obligatory louse endosymbiont Candidatus Riesia pediculicola encodes less than 600 genes on a short, linear chromosome and a circular plasmid. The plasmid harbors a unique arrangement of genes required for the synthesis of pantothenate, an essential vitamin deficient in the louse diet. The human body louse, its primary endosymbiont, and the bacterial pathogens that it vectors all possess genomes reduced in size compared with their free-living close relatives. Thus, the body louse genome project offers unique information and tools to use in advancing understanding of coevolution among vectors, symbionts, and pathogens.

Timothy Sharbel,  Leo Beukeboom,  Carlos Camacho (2000)
B chromosomes are extra chromosomes to the standard complement that occur in many organisms. They can originate in a number of ways including derivation from autosomes and sex chromosomes in intra- and interspecies crosses. Their subsequent molecular evolution resembles that of univalent sex chromosomes, which involves gene silencing, heterochromatinization and the accumulation of repetitive DNA and transposons. B-chromosome frequencies in populations result from a balance between their transmission rates and their effects on host fitness. Their long-term evolution is considered to be the outcome of selection on the host genome to eliminate B chromosomes or suppress their effects and on the B chromosome's ability to escape through the generation of new variants. Because B chromosomes interact with the standard chromosomes, they can play an important role in genome evolution and may be useful for studying molecular evolutionary processes.

Ellen van Wilgenburg,  Gerard Driessen,  Leo Beukeboom (2006)
The haplodiploid sex determining mechanism in Hymenoptera (males are haploid, females are diploid) has played an important role in the evolution of this insect order. In Hymenoptera sex is usually determined by a single locus, heterozygotes are female and hemizygotes are male. Under inbreeding, homozygous diploid and sterile males occur which form a genetic burden for a population. We review life history and genetical traits that may overcome the disadvantages of single locus complementary sex determination (sl-CSD). Behavioural adaptations to avoid matings between relatives include active dispersal from natal patches and mating preferences for non-relatives. In non-social species, temporal and spatial segregation of male and female offspring reduces the burden of sl-CSD. In social species, diploid males are produced at the expense of workers and female reproductives. In some social species, diploid males and diploid male producing queens are killed by workers. Diploid male production may have played a role in the evolution or maintenance of polygyny (multiple queens) and polyandry (multiple mating). Some forms of thelytoky (parthenogenetic female production) increase homozygosity and are therefore incompatible with sl-CSD. We discuss a number of hypothetical adaptations to sl-CSD which should be considered in future studies of this insect order.

Bilateral Russian-Bulgarian research grant no. 19-54-18002 from the Russian Foundation for Basic Research and from the National Science Fund of Bulgaria (Ministry of Education and Science)