Reinterpretation of evidence advanced for neo-oogenesis in mammals, in terms of a finite oocyte reserve 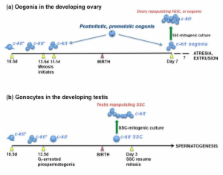 The central tenet of ovarian biology, that the oocyte reserve in adult female mammals is finite, has been challenged over recent years by proponents of neo-oogenesis, who claim that germline stem cells exist in the ovarian surface epithelium or the bone marrow. Currently opinion is divided over these claims, and further scrutiny of the evidence advanced in support of the neo-oogenesis hypothesis is warranted - especially in view of the enormous implications for female fertility and health. This article contributes arguments against the hypothesis, providing alternative explanations for key observations, based on published data. Specifically, DNA synthesis in germ cells in the postnatal mouse ovary is attributed to mitochondrial genome replication, and to DNA repair in oocytes lagging in meiotic progression. Lines purported to consist of germline stem cells are identified as ovarian epithelium or as oogonia, from which cultures have been derived previously. Effects of ovotoxic treatments are found to negate claims for the existence of germline stem cells. And arguments are presented for the misidentification of ovarian somatic cells as de novo oocytes. These clarifications, if correct, undermine the concept that germline stem cells supplement the oocyte quota in the postnatal ovary; and instead comply with the theory of a fixed, unregenerated reserve. It is proposed that acceptance of the neo-oogenesis hypothesis is erroneous, and may effectively impede research in areas of ovarian biology. To illustrate, a novel explanation that is consistent with orthodox theory is provided for the observed restoration of fertility in chemotherapy-treated female mice following bone marrow transplantation, otherwise interpreted by proponents of neo-oogenesis as involving stimulation of endogenous germline stem cells. Instead, it is proposed that the chemotherapeutic regimens induce autoimmunity to ovarian antigens, and that the haematopoietic chimaerism produced by bone marrow transplantation circumvents activation of an autoreactive response, thereby rescuing ovarian function. The suggested mechanism draws from animal models of autoimmune ovarian disease, which implicate dysregulation of T cell regulatory function; and from a surmised role for follicular apoptosis in the provision of ovarian autoantigens, to sustain self-tolerance during homeostasis. This interpretation has direct implications for fertility preservation in women undergoing chemotherapy.

Blimp1 is a critical determinant of the germ cell lineage in mice.

Dónal O'Carroll,  Michel Nussenzweig,  Katia Ancelin … (2005)
Germ cell fate in mice is induced in pluripotent epiblast cells in response to signals from extraembryonic tissues. The specification of approximately 40 founder primordial germ cells and their segregation from somatic neighbours are important events in early development. We have proposed that a critical event during this specification includes repression of a somatic programme that is adopted by neighbouring cells. Here we show that Blimp1 (also known as Prdm1), a known transcriptional repressor, has a critical role in the foundation of the mouse germ cell lineage, as its disruption causes a block early in the process of primordial germ cell formation. Blimp1-deficient mutant embryos form a tight cluster of about 20 primordial germ cell-like cells, which fail to show the characteristic migration, proliferation and consistent repression of homeobox genes that normally accompany specification of primordial germ cells. Furthermore, our genetic lineage-tracing experiments indicate that the Blimp1-positive cells originating from the proximal posterior epiblast cells are indeed the lineage-restricted primordial germ cell precursors.

James Pru,  Jacqueline Tilly,  Jonathan L. Tilly … (2004)
A basic doctrine of reproductive biology is that most mammalian females lose the capacity for germ-cell renewal during fetal life, such that a fixed reserve of germ cells (oocytes) enclosed within follicles is endowed at birth. Here we show that juvenile and adult mouse ovaries possess mitotically active germ cells that, based on rates of oocyte degeneration (atresia) and clearance, are needed to continuously replenish the follicle pool. Consistent with this, treatment of prepubertal female mice with the mitotic germ-cell toxicant busulphan eliminates the primordial follicle reserve by early adulthood without inducing atresia. Furthermore, we demonstrate cells expressing the meiotic entry marker synaptonemal complex protein 3 in juvenile and adult mouse ovaries. Wild-type ovaries grafted into transgenic female mice with ubiquitous expression of green fluorescent protein (GFP) become infiltrated with GFP-positive germ cells that form follicles. Collectively, these data establish the existence of proliferative germ cells that sustain oocyte and follicle production in the postnatal mammalian ovary.