Filarial abscess in the submandibular region 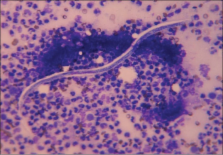 Filariasis is a parasitic infectious disease caused by filarial nematode worms. These worms mainly dwell in subcutaneous tissues and lymphatics of the human host, with a predilection for lower limbs, retroperitoneal tissues, spermatic cord, and epididymis. Oral or perioral involvement of the filarial nematode is rare. This case report describes a filarial abscess in the right submandibular region. Fine needle aspiration cytology of the abscess revealed the presence of microfilaria of Wuchereria bancrofti species. The parasite was also present in the peripheral blood smear. Filarial infection presenting in this region is unusual and can cause diagnostic dilemma. The clinician can consider filariasis as one of the differential diagnosis while treating those abscesses in the orofacial region that are unresponsive to routine management, especially, patients hailing from endemic areas.

Microfilariae in cytologic smears: a report of six cases.

Deepa Varghese,  C Raghuveer,  M Pai … (2016)
Filariasis is a major public health problem in tropical countries, including India. Despite this high incidence, it is unusual to find microfilariae in fine needle aspiration cytology. (FNAC) smears and body fluids. Six cases of filariasis diagnosed by FNAC are reported. In case 1, a thyroid aspirate from a 23-year-old female showed a microfilaria with colloid and thyroid follicular cells. In case 2, pericardial fluid from a 50-year-old male with breathlessness and chest pain showed clusters of malignant cells and many microfilariae. In case 3, a bronchial aspirate from a 55-year-old male with fever and chest pain showed aggregates of acute inflammatory cells and a microfilaria. Cases 4 and 5 were lymph node aspirates from a 29-year-old male and 3-year-old female. Both smears showed microfilariae in a background of reactive lymphoid cells. In case 6, FNAC from a 21-year-old female with a cystic swelling in the breast showed clusters of microfilariae, lymphocytes and granular debris. In three of the six cases microfilariae were the cause of symptoms, whereas in the other three cases, microfilariae were associated with other diseases, including malignancy. Thus, careful screening of FNAC smears might be helpful in detecting microfilariae, even in asymptomatic patients.

Christi A. Walter,  H Krishnaswami,  A Cariappa (2015)
Microfilariae of Wuchereria bancrofti were observed in cytologic material in 35 cases. The material included cervicovaginal smears (17 cases), effusions (14), urine (2), bronchial washings (1) and ovarian cyst fluid (1). The initial diagnosis was made from the cytologic smear in all cases; none had clinical filariasis. Symptomatic vaginal bleeding in 9 of the 17 cases with microfilaria-positive cervicovaginal smears was reflected in the large numbers of red blood cells found in the smear. Blood eosinophilia was present in 11 of 19 cases investigated. Eosinophils were seen in the smears in 20 cases. In the majority of the cases of effusions with microfilariae the effusions were malignant. Significant adherence of inflammatory cells and macrophages to microfilariae was present in 7 of the 35 cases. The significance of these findings is discussed.