Treatment of atrophic nonunion via autogenous ilium grafting assisted by vertical fixation of double plates: A case series of patients 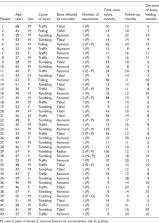 To investigate the efficacy of the treatment of atrophic nonunion using structural autogenous ilium bone grafting in combination with vertical fixation of double plates.

This retrospective study analysed the clinical data from consecutive patients with atrophic nonunion who underwent autogenous ilium grafting in combination with double-plate vertical fixation. The injury type and the bone affected by nonunion, the duration of nonunion and the outcomes following surgery were recorded for all patients.

The study enrolled 43 patients with atrophic nonunion of the upper and lower limbs: 17 patients with tibial nonunion, 21 with femoral nonunion, four with humeral nonunion and one with radial shaft nonunion. The mean duration of postoperative follow-up was 14.5 months (range, 8–28 months). A total of 43 of 43 patients (100%) achieved a healed nonunion fracture without the occurrence of complications such as infection, fracture of internal fixation or pain in the harvesting site. Comprehensive postoperative assessments of bone healing and function were observed to be good and/or excellent in all 43 patients.

The biology of fracture healing in long bones.

Hans K Uhthoff,  Philippe Poitras,  David Backman (2006)
Metal plates for internal fixation of fractures have been used for more than 100 years. Although initial shortcomings such as corrosion and insufficient strength have been overcome, more recent designs have not solved all problems. Further research is needed to develop a plate that accelerates fracture healing while not interfering with bone physiology. The introduction of rigid plates had by far the greatest impact on plate fixation of fractures. However, it led to cortical porosis, delayed bridging, and refractures after plate removal. These unwarranted effects were said to be caused by bone–plate contact interfering with cortical perfusion. Consequently, further plate modifications aimed to reduce this contact area to minimize necrosis and subsequent porosis. The advocates of limited-contact plates have not published measurements of the contact area or proof of the temporary nature of the porosis. Moreover, clinical studies of newer plate types have failed to show a superior outcome. Histomor-phometric measurements of the cortex showed no difference in the extent of necrosis under plates having different contact areas. Necrosis was predominant in the periosteal cortical half, whereas porosis occurred mostly in the endosteal cortical half. No positive correlation was found between either. The scientific evidence to date strongly suggests that bone loss is caused by stress shielding and not interference with cortical perfusion secondary to bone–plate contact. Consequently, an axially compressible plate (ACP) incorporating polylactide (PLA) inserts press-fit around screw holes was designed. The bioresorbable inserts should allow for (1) increased micromotion in the axial plane to promote healing during the union phase and (2) gradual degradation over time to decrease stress shielding during the remodeling phase. Results of ongoing experimental results are encouraging. Only plates allowing dynamic compression in the axial plane can lead to a revolution in fracture fixation.

Effects of construct stiffness on healing of fractures stabilized with locking plates.