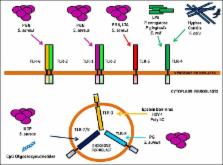 Fibroblasts are present in all tissues but predominantly in connective tissues. Some of their functions include contractility, locomotion, collagen and elastin fiber production, and the regulation and degradation of the extracellular matrix. Also, fibroblasts act as sentinels to produce inflammatory mediators in response to several microorganisms. There is evidence that fibroblasts can synthesize toll-like receptors (TLRs), antimicrobial peptides, proinflammatory cytokines, chemokines, and growth factors, which are important molecules involved in innate immune response against microorganisms. Fibroblasts can express TLRs (TLR-1 to TLR-10) to sense microbial components or microorganisms. They can synthesize antimicrobial peptides, such as LL-37, defensins hBD-1, and hBD-2, molecules that perform antimicrobial activity. Also, they can produce proinflammatory cytokines, such as TNFα, INFγ, IL-6, IL-12p70, and IL-10; other chemokines, such as CCL1, CCL2, CCL5, CXCL1, CXCL8, CXCL10, and CX3CL1; and the growth factors granulocyte/macrophage colony-stimulating factor (GM-CSF) and granulocyte colony-stimulating factor (G-CSF) to induce and recruit inflammatory cells. According to their immunological attributes, we can conclude that fibroblasts are sentinel cells that recognize pathogens, induce the recruitment of inflammatory cells via cytokines and growth factors, and release antimicrobial peptides, complying with the characteristics of real sentinels.

Song-Tao Ding,  Michael W Palmer,  Ulrich Melcher (2013)
Background Plant endophytic bacteria play an important role benefiting plant growth or being pathogenic to plants or organisms that consume those plants. Multiple species of bacteria have been found co-inhabiting plants, both cultivated and wild, with viruses and fungi. For these reasons, a general understanding of plant endophytic microbial communities and their diversity is necessary. A key issue is how the distributions of these bacteria vary with location, with plant species, with individual plants and with plant growing season. Results Five common plant species were collected monthly for four months in the summer of 2010, with replicates from four different sampling sites in the Tallgrass Prairie Preserve in Osage County, Oklahoma, USA. Metagenomic DNA was extracted from ground, washed plant leaf samples, and fragments of the bacterial 16S rDNA genes were amplified for analysis of terminal restriction fragment length polymorphism (T-RFLP). We performed mono-digestion T-RFLP with restriction endonuclease DdeI, to reveal the structures of leaf endophytic bacterial communities, to identify the differences between plant-associated bacterial communities in different plant species or environments, and to explore factors affecting the bacterial distribution. We tested the impacts of three major factors on the leaf endophytic bacterial communities, including host plant species, sampling dates and sampling locations. Conclusions Results indicated that all of the three factors were significantly related (α = 0.05) to the distribution of leaf endophytic bacteria, with host species being the most important, followed by sampling dates and sampling locations.

Thanuja Herath,  Richard Darveau,  Chaminda Jayampath Seneviratne … (2013)
Background Porphyromonas gingivalis is a major pathogen of periodontal disease that affects a majority of adults worldwide. Increasing evidence shows that periodontal disease is linked to various systemic diseases like diabetes and cardiovascular disease, by contributing to increased systemic levels of inflammation. Lipopolysaccharides (LPS), as a key virulent attribute of P. gingivalis, possesses significant amount of lipid A heterogeneity containing tetra- (LPS1435/1449) and penta-acylated (LPS1690) structures. Hitherto, the exact molecular mechanism of P. gingivalis LPS involved in periodontal pathogenesis remains unclear, due to limited understanding of the specific receptors and signaling pathways involved in LPS-host cell interactions. Methodology/Principal Findings This study systematically investigated the effects of P. gingivalis LPS1435/1449 and LPS1690 on the expression of TLR2 and TLR4 signal transduction and the activation of pro-inflammatory cytokines IL-6 and IL-8 in human gingival fibroblasts (HGFs). We found that LPS1435/1449 and LPS1690 differentially modulated TLR2 and TLR4 expression. NF-κB pathway was significantly activated by LPS1690 but not by LPS1435/1449. In addition, LPS1690 induced significant expression of NF-κB and p38 MPAK pathways-related genes, such as NFKBIA, NFKB1, IKBKB, MAP2K4 and MAPK8. Notably, the pro-inflammatory genes including GM-CSF, CXCL10, G-CSF, IL-6, IL-8 and CCL2 were significantly upregulated by LPS1690 while down-regulated by LPS1435/1449. Blocking assays confirmed that TLR4-mediated NF-κB signaling was vital in LPS1690-induced expression of IL-6 and IL-8 in HGFs. Conclusions/Significance The present study suggests that the tetra- and penta-acylated lipid A structures of P. gingivalis LPS differentially activate TLR4-mediated NF-κB signaling pathway, and significantly modulate the expression of IL-6 and IL-8 in HGFs. The ability to alter the lipid A structure of LPS could be one of the strategies carried-out by P. gingivalis to evade innate host defense in gingival tissues, thereby contributing to periodontal pathogenesis.

Identification and functions of pattern-recognition receptors.

Yutaro Kumagai,  Shizuo Akira (2010)
Since the identification of Toll-like receptors, our knowledge about pattern-recognition receptors (PRRs) has increased rapidly. Classes of PRRs that have been recently discovered include RIG-I-like receptors, Nod-like receptors, and C-type lectin receptors. Recent studies have started to clarify the molecular basis of PRR-ligand interactions, yet the numbers of PRRs and their ligands continue to increase. New technologies have elucidated the network regulation of immune responses at the cellular and in vivo levels. We review the most recent discoveries about PRRs and their ligands, their roles in intracellular and in vivo regulation of immune responses, and the systems biology of innate immunity. Copyright 2010 American Academy of Allergy, Asthma & Immunology. Published by Mosby, Inc. All rights reserved.