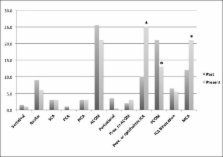 The growing number of community hospitals with neurointerventional services over the past decade has changed the type and complexity of cerebral aneurysms referred to tertiary centers. The authors hypothesized that this would be reflected in changes in the location frequencies of aneurysms treated now compared to before the widespread institution of endovascular coiling.

The significant reduction in the referrals to our tertiary center of less technically complex aneurysms (posterior communicating segment) and increased referrals of aneurysms not as amenable to coil embolization (middle cerebral artery) is likely attributable to the growth of neurointerventional services at community hospitals over the past 10 years.

Juha Hernesniemi,  Juhana Frösen,  K Helin … (2010)
Finnish saccular intracranial aneurysm (sIA) disease associates to 2q33, 8q11, and 9p21 loci and links to 19q13, Xp22, and kallikrein cluster in sIA families. Detailed phenotyping of familial and sporadic sIA disease is required for fine mapping of the Finnish sIA disease. Eastern Finland, which is particularly isolated genetically, is served by Kuopio University Hospital's Department of Neurosurgery. We studied the site and size distribution of unruptured and ruptured sIAs in correlation to age and sex in 316 familial and 1454 sporadic sIA patients on first admission from 1993 to 2007. The familial and sporadic aneurysmic subarachnoid hemorrhage patients had slightly different median ages (46 vs 51 years in men; 50 vs 57 years in women), different proportion of males (50% vs 42%), equal median diameter of ruptured sIAs (7 mm vs 7 mm) with no correlation to age, and equally unruptured sIAs (30% vs 28%). The unruptured sIAs were most frequent at the middle cerebral artery (MCA) bifurcation (44% vs 39%) and the anterior communicating artery (12% vs 13%), in contrast to the ruptured sIAs at the anterior communicating artery (37% vs 29%) and MCA bifurcation (29% vs 29%). The size of unruptured sIAs increased by age in the sporadic group. The MCA bifurcation was most prone to develop unruptured sIAs, suggesting that MCA branching during the embryonic period might be involved. The different site distribution of ruptured and unruptured sIAs suggests different etiologies for sIA formation and rupture. The lack of correlation of size and age at rupture (exposure to risk factors) suggests that the size at rupture is more dependent on hemodynamic stress.

Recent trends in the treatment of cerebral aneurysms: analysis of a nationwide inpatient database.

Mario Zuccarello,  Norberto Andaluz (2008)
The most appropriate treatment for cerebral aneurysms, both ruptured and unruptured, is currently under debate, and updated guidelines have yet to be defined. The authors attempted to identify trends in therapy for cerebral aneurysms in the US as well as outcomes. The authors retrospectively reviewed data from the Nationwide Inpatient Sample hospital discharge database (Healthcare Cost and Utilization Project, Agency for Healthcare Research and Quality) for the period 1993-2003. Multiple variables were categorized and subjected to statistical analysis for International Classification of Diseases, 9th Revision, Clinical Modification codes related to subarachnoid hemorrhage (SAH), unruptured aneurysm, and clipping and endovascular treatment of cerebral aneurysm. During the study period, the numbers of discharges remained stable for SAH but doubled for unruptured aneurysms. Concomitantly, the number of aneurysms treated with clip placement remained stable, and the number treated by means of endovascular procedures doubled. By the study's end, the mortality rates had decreased 20% for SAH and 50% for unruptured aneurysms. Increasing age was associated with increased mortality rates, mean length of hospital stay (LOS), and mean charges (p < 0.01). Endovascular treatment was used more often in older patients (p < 0.01). Teaching status and larger hospital size were associated with higher charges and longer hospital stays (although the association was not statistically significant) and with better outcomes (p < 0.05) and lower mortality rates (p < 0.05), especially in patients who underwent aneurysm clipping (p < 0.01). Endovascular treatment was associated with significantly higher mortality rates in small hospitals (p < 0.001) and steadily increasing morbidity rates (45%). Morbidity rates, mean LOS, and mean charges were higher for aneurysm clipping (p < 0.01). From 1993 to 2003, endovascular techniques for aneurysm occlusion have been increasingly used, while the use of surgical clipping procedures has remained stable. Toward the end of the study period, better overall outcomes were observed in the treatment of cerebral aneurysms, both ruptured and unruptured. Large academic centers were associated with better results, particularly for surgical clip placement.