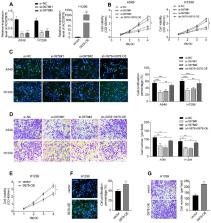 Rationale: Non-small cell lung cancer (NSCLC) is a deadly disease with a hallmark of aberrant metabolism. The mechanism of glycolysis associated lncRNA underlying the aggressive behaviors of NSCLC is poorly understood.

Methods: The expression level of AC020978 in NSCLC was measured by quantitative real-time PCR and fluorescence in situ hybridization (FISH) assay. The biological role of AC020978 in cell proliferation and aerobic glycolysis was determined by functional experiments in vitro and in vivo. The transcription of AC020978 was assessed by dual-luciferase reporter and chromatin immunoprecipitation (ChIP) assay. RNA pull-down, mass spectrometry and RNA immunoprecipitation (RIP) assays were used to identify the interaction protein with AC020978. Western blotting, in situ proximity ligation assay (PLA), and co-immunoprecipitation (co-IP) were performed to reveal the potential mechanism of AC020978.

Conclusions: Together, these data provided evidence that AC020978 conferred an aggressive phenotype to NSCLC and was a poor prognosticator. Targeting AC020978 might be an effective therapeutic strategy for NSCLC.

Pyruvate kinase M2 is a PHD3-stimulated coactivator for hypoxia-inducible factor 1.

Xueliang Gao,  Haizhen Wang,  Jenny J. Yang … (2012)
Pyruvate kinase isoform M2 (PKM2) is a glycolysis enzyme catalyzing conversion of phosphoenolpyruvate (PEP) to pyruvate by transferring a phosphate from PEP to ADP. We report here that PKM2 localizes to the cell nucleus. The levels of nuclear PKM2 correlate with cell proliferation. PKM2 activates transcription of MEK5 by phosphorylating stat3 at Y705. In vitro phosphorylation assays show that PKM2 is a protein kinase using PEP as a phosphate donor. ADP competes with the protein substrate binding, indicating that the substrate may bind to the ADP site of PKM2. Our experiments suggest that PKM2 dimer is an active protein kinase, while the tetramer is an active pyruvate kinase. Expression of a PKM2 mutant that exists as a dimer promotes cell proliferation, indicating that protein kinase activity of PKM2 plays a role in promoting cell proliferation. Our study reveals an important link between metabolism alteration and gene expression during tumor transformation and progression. Copyright Â© 2012 Elsevier Inc. All rights reserved.

K L Eales,  K E R Hollinshead,  D A Tennant (2016)
Low oxygen tension (hypoxia) is a pervasive physiological and pathophysiological stimulus that metazoan organisms have contended with since they evolved from their single-celled ancestors. The effect of hypoxia on a tissue can be either positive or negative, depending on the severity, duration and context. Over the long-term, hypoxia is not usually consistent with normal function and so multicellular organisms have had to evolve both systemic and cellular responses to hypoxia. Our reliance on oxygen for efficient adenosine triphosphate (ATP) generation has meant that the cellular metabolic network is particularly sensitive to alterations in oxygen tension. Metabolic changes in response to hypoxia are elicited through both direct mechanisms, such as the reduction in ATP generation by oxidative phosphorylation or inhibition of fatty-acid desaturation, and indirect mechanisms including changes in isozyme expression through hypoxia-responsive transcription factor activity. Significant regions of cancers often grow in hypoxic conditions owing to the lack of a functional vasculature. As hypoxic tumour areas contain some of the most malignant cells, it is important that we understand the role metabolism has in keeping these cells alive. This review will outline our current understanding of many of the hypoxia-induced changes in cancer cell metabolism, how they are affected by other genetic defects often present in cancers, and how these metabolic alterations support the malignant hypoxic phenotype.