A Gross Anatomy Ontology for Hymenoptera 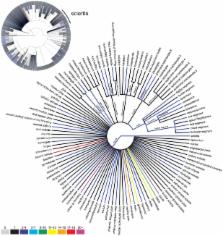 Hymenoptera is an extraordinarily diverse lineage, both in terms of species numbers and morphotypes, that includes sawflies, bees, wasps, and ants. These organisms serve critical roles as herbivores, predators, parasitoids, and pollinators, with several species functioning as models for agricultural, behavioral, and genomic research. The collective anatomical knowledge of these insects, however, has been described or referred to by labels derived from numerous, partially overlapping lexicons. The resulting corpus of information—millions of statements about hymenopteran phenotypes—remains inaccessible due to language discrepancies. The Hymenoptera Anatomy Ontology (HAO) was developed to surmount this challenge and to aid future communication related to hymenopteran anatomy. The HAO was built using newly developed interfaces within mx, a Web-based, open source software package, that enables collaborators to simultaneously contribute to an ontology. Over twenty people contributed to the development of this ontology by adding terms, genus differentia, references, images, relationships, and annotations. The database interface returns an Open Biomedical Ontology (OBO) formatted version of the ontology and includes mechanisms for extracting candidate data and for publishing a searchable ontology to the Web. The application tools are subject-agnostic and may be used by others initiating and developing ontologies. The present core HAO data constitute 2,111 concepts, 6,977 terms (labels for concepts), 3,152 relations, 4,361 sensus (links between terms, concepts, and references) and over 6,000 text and graphical annotations. The HAO is rooted with the Common Anatomy Reference Ontology (CARO), in order to facilitate interoperability with and future alignment to other anatomy ontologies, and is available through the OBO Foundry ontology repository and BioPortal. The HAO provides a foundation through which connections between genomic, evolutionary developmental biology, phylogenetic, taxonomic, and morphological research can be actualized. Inherent mechanisms for feedback and content delivery demonstrate the effectiveness of remote, collaborative ontology development and facilitate future refinement of the HAO.

Sylvie Samain,  Gabor Gyapay,  Marc Annaheim … (2009)
Many species of parasitoid wasps inject polydnavirus particles in order to manipulate host defenses and development. Because the DNA packaged in these particles encodes almost no viral structural proteins, their relation to viruses has been debated. Characterization of complementary DNAs derived from braconid wasp ovaries identified genes encoding subunits of a viral RNA polymerase and structural components of polydnavirus particles related most closely to those of nudiviruses--a sister group of baculoviruses. The conservation of this viral machinery in different braconid wasp lineages sharing polydnaviruses suggests that parasitoid wasps incorporated a nudivirus-related genome into their own genetic material. We found that the nudiviral genes themselves are no longer packaged but are actively transcribed and produce particles used to deliver genes essential for successful parasitism in lepidopteran hosts.