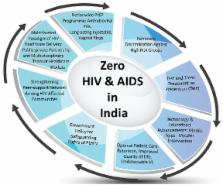 Johannes F. Scheid,  Joshua A Horwitz,  Yotam Bar-On … (2016)
Interruption of combination antiretroviral therapy in HIV-1-infected individuals leads to rapid viral rebound. Here we report the results of a phase IIa open label clinical trial evaluating 3BNC117,a broad and potent neutralizing antibody against the CD4 binding site of the HIV-1 Env protein, during analytical treatment interruption in 13 HIV-1-infected individuals. Participants with 3BNC117-sensitive virus outgrowth cultures were enrolled. Results show that two or four 30 mg kg(-1) 3BNC117 infusions,separated by 3 or 2 weeks, respectively, are generally well tolerated.Infusions are associated with a delay in viral rebound of 5-9 weeks after two infusions, and up to 19 weeks after four infusions, or an average of 6.7 and 9.9 weeks, respectively, compared with 2.6 weeks for historical controls (P < 0.00001). Rebound viruses arise predominantly from a single provirus. In most individuals,emerging viruses show increased resistance, indicating escape.However, 30% of participants remained suppressed until antibody concentrations waned below 20 μg ml(-1), and the viruses emerging in all but one of these individuals showed no apparent resistance to 3BCN117, suggesting failure to escape over a period of 9-19 weeks.We conclude that the administration of 3BNC117 exerts strong selective pressure on HIV-1 emerging from latent reservoirs during analytical treatment interruption in humans.

Rajeev Gautam,  Yoshiaki Nishimura,  Amarendra Pegu … (2016)
Despite the success of potent anti-retroviral drugs in controlling human immunodeficiency virus type 1 (HIV-1) infection, little progress has been made in generating an effective HIV-1 vaccine. Although passive transfer of anti-HIV-1 broadly neutralizing antibodies can protect mice or macaques against a single high-dose challenge with HIV or simian/human (SIV/HIV) chimaeric viruses (SHIVs) respectively, the long-term efficacy of a passive antibody transfer approach for HIV-1 has not been examined. Here we show, on the basis of the relatively long-term protection conferred by hepatitis A immune globulin, the efficacy of a single injection (20 mg kg(-1)) of four anti-HIV-1-neutralizing monoclonal antibodies (VRC01, VRC01-LS, 3BNC117, and 10-1074 (refs 9 - 12)) in blocking repeated weekly low-dose virus challenges of the clade B SHIVAD8. Compared with control animals, which required two to six challenges (median = 3) for infection, a single broadly neutralizing antibody infusion prevented virus acquisition for up to 23 weekly challenges. This effect depended on antibody potency and half-life. The highest levels of plasma-neutralizing activity and, correspondingly, the longest protection were found in monkeys administered the more potent antibodies 3BNC117 and 10-1074 (median = 13 and 12.5 weeks, respectively). VRC01, which showed lower plasma-neutralizing activity, protected for a shorter time (median = 8 weeks). The introduction of a mutation that extends antibody half-life into the crystallizable fragment (Fc) domain of VRC01 increased median protection from 8 to 14.5 weeks. If administered to populations at high risk of HIV-1 transmission, such an immunoprophylaxis regimen could have a major impact on virus transmission.

P. Newman,  Siddhartha S. Jana,  Mary Rotheram-Borus … (2004)
High rates of HIV infection among sex workers in India indicate the importance of understanding the process of establishing a sustainable community intervention program. The Sonagachi Project, based in Calcutta, India, has been associated with lower HIV rates among sex workers as compared to other urban centers in India. The program defined HIV as an occupational health problem and included multifaceted, multilevel interventions addressing community (having a high-status advocate; addressing environmental barriers and resources), group (changing social relationships), and individual factors (improving skills and competencies related to HIV prevention and treatment). The Sonagachi Project's core concepts and strategies evolved as community needs were expressed and defined. In particular, the program was not initially conceptualized as a community empowerment project but emerged over time, allowing for project sustainability. Project components appear to be replicable across settings within India and worldwide.