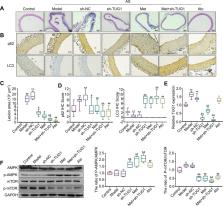 Metformin has been shown to inhibit the proliferation and migration of vascular wall cells. However, the mechanism through which metformin acts on atherosclerosis (AS) via the long non-coding RNA taurine up-regulated gene 1 (lncRNA TUG1) is still unknown. Thus, this research investigated the effect of metformin and lncRNA TUG1 on AS.

First, qRT-PCR was used to detect the expression of lncRNA TUG1 in patients with coronary heart disease (CHD). Then, the correlation between metformin and TUG1 expression in vitro and their effects on proliferation, migration, and autophagy in vascular wall cells were examined. Furthermore, in vivo experiments were performed to verify the anti-AS effect of metformin and TUG1 to provide a new strategy for the prevention and treatment of AS.

qRT-PCR results suggested that lncRNA TUG1 expression was robustly upregulated in patients with CHD. In vitro experiments indicated that after metformin administration, the expression of lncRNA TUG1 decreased in a time-dependent manner. Metformin and TUG1 knockdown via small interfering RNA both inhibited proliferation and migration while promoted autophagy via the AMPK/mTOR pathway in vascular wall cells. In vivo experiments with a rat AS model further demonstrated that metformin and sh- TUG1 could inhibit the progression of AS.

Taken together, our data demonstrate that metformin might function to prevent AS by activating the AMPK/mTOR pathway via lncRNA TUG1.

Repression of the human dihydrofolate reductase gene by a non-coding interfering transcript.

Aroul Ramadass,  Danielle Chow,  Ana Barros … (2007)
Alternative promoters within the same gene are a general phenomenon in gene expression. Mechanisms of their selective regulation vary from one gene to another and are still poorly understood. Here we show that in quiescent cells the mechanism of transcriptional repression of the major promoter of the gene encoding dihydrofolate reductase depends on a non-coding transcript initiated from the upstream minor promoter and involves both the direct interaction of the RNA and promoter-specific interference. The specificity and efficiency of repression is ensured by the formation of a stable complex between non-coding RNA and the major promoter, direct interaction of the non-coding RNA with the general transcription factor IIB and dissociation of the preinitiation complex from the major promoter. By using in vivo and in vitro assays such as inducible and reconstituted transcription, RNA bandshifts, RNA interference, chromatin immunoprecipitation and RNA immunoprecipitation, we show that the regulatory transcript produced from the minor promoter has a critical function in an epigenetic mechanism of promoter-specific transcriptional repression.

The noncoding RNA taurine upregulated gene 1 is required for differentiation of the murine retina.

T. Matsuda,  Jesse T Young,  Constance L. Cepko (2005)
With the advent of genome-wide analyses, it is becoming evident that a large number of noncoding RNAs (ncRNAs) are expressed in vertebrates. However, of the thousands of ncRNAs identified, the functions of relatively few have been established. In a screen for genes upregulated by taurine in developing retinal cells, we identified a gene that appears to be a ncRNA. Taurine Upregulated Gene 1 (TUG1) is a spliced, polyadenylated RNA that does not encode any open reading frame greater than 82 amino acids in its full-length, 6.7 kilobase (kb) RNA sequence. Analyses of Northern blots and in situ hybridization revealed that TUG1 is expressed in the developing retina and brain, as well as in adult tissues. In the newborn retina, knockdown of TUG1 with RNA interference (RNAi) resulted in malformed or nonexistent outer segments of transfected photoreceptors. Immunofluorescent staining and microarray analyses suggested that this loss of proper photoreceptor differentiation is a result of the disregulation of photoreceptor gene expression. A function for a newly identified ncRNA, TUG1, has been established. TUG1 is necessary for the proper formation of photoreceptors in the developing rodent retina.

Circulating Noncoding RNAs as Biomarkers of Cardiovascular Disease and Injury.

Janika Viereck,  Thomas Thum (2017)
The discovery of thousands of noncoding RNAs (ncRNAs) has expanded our view on mammalian genomes and transcriptomes, as well as their organization and regulation. Accumulating evidence on aberrantly regulated ncRNAs, including short microRNAs, long ncRNAs and circular RNAs, across various heart diseases indicates that ncRNAs are critical contributors to cardiovascular pathophysiology. In addition, ncRNAs are released into the circulation where they are present in concentration levels that differ between healthy subjects and diseased patients. Although little is known about the origin and function of such circulating ncRNAs, these molecules are increasingly recognized as noninvasive and readily accessible biomarker for risk stratification, diagnosis and prognosis of cardiac injury, and multiple forms of cardiovascular disease. In this review, we summarize recent findings on biological characteristics of circulating ncRNAs and highlight their value as potential biomarker in selected pathologies of cardiovascular disease.