Influence of the Angiotensin Converting Enzyme Insertion or Deletion Genetic Variant and Coronary Restenosis Risk: Evidence Based on 11,193 Subjects 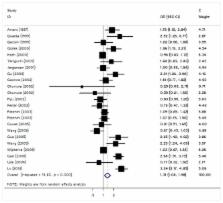 The insertion/deletion (I/D) polymorphism of the gene encoding angiotensin converting enzyme is a controversial risk factor for restenosis after percutaneous transluminal coronary angioplasties (PTCA) in patients. Genetic association studies can be problematic to reproduce due to insufficient power, phenotypic heterogeneity, population stratification, small effect of the variant and even publication biases. To derive a more precise estimation of the relationship as well as to quantify the between-study heterogeneity and potential bias, a meta-analysis including 11,193 patients from 33 published cohort studies was performed. In a combined analysis, the summary per-allele odds ratio for restenosis was 1.31 (95% CI: 1.08-1.58, P = 0.006), and 1.22 (95% CI: 0.95-1.56, P = 0.12), for PTCA-stent and PTCA-balloon, respectively. In the subgroup analysis by ethnicity, significantly increased restenosis risks after PTCA-stent were found in Asians for the polymorphism; whereas no significant associations were found among Caucasians. As for restenosis risks after PTCA-balloon, no evidence of any gene-disease association was obtained in the stratiﬁed analyses according to ethnicity and study size. In conclusion, this meta-analysis demonstrated that the DD homozygous of ACE I/D polymorphism was significantly associated with elevated restenosis susceptibility after PTCA-stent among Asian populations.

Patrick W. Serruys,  Peter P.T.h. de Jaegere,  Ferdinand Kiemeneij … (1994)
Balloon-expandable coronary-artery stents were developed to prevent coronary restenosis after coronary angioplasty. These devices hold coronary vessels open at sites that have been dilated. However, it is unknown whether stenting improves long-term angiographic and clinical outcomes as compared with standard balloon angioplasty. A total of 520 patients with stable angina and a single coronary-artery lesion were randomly assigned to either stent implantation (262 patients) or standard balloon angioplasty (258 patients). The primary clinical end points were death, the occurrence of a cerebrovascular accident, myocardial infarction, the need for coronary-artery bypass surgery, or a second percutaneous intervention involving the previously treated lesion, either at the time of the initial procedure or during the subsequent seven months. The primary angiographic end point was the minimal luminal diameter at follow-up, as determined by quantitative coronary angiography. After exclusions, 52 patients in the stent group (20 percent) and 76 patients in the angioplasty group (30 percent) reached a primary clinical end point (relative risk, 0.68; 95 percent confidence interval, 0.50 to 0.92; P = 0.02). The difference in clinical-event rates was explained mainly by a reduced need for a second coronary angioplasty in the stent group (relative risk, 0.58; 95 percent confidence interval, 0.40 to 0.85; P = 0.005). The mean (+/- SD) minimal luminal diameters immediately after the procedure were 2.48 +/- 0.39 mm in the stent group and 2.05 +/- 0.33 mm in the angioplasty group; at follow-up, the diameters were 1.82 +/- 0.64 mm in the stent group and 1.73 +/- 0.55 mm in the angioplasty group (P = 0.09), which correspond to rates of restenosis (diameter of stenosis, > or = 50 percent) of 22 and 32 percent, respectively (P = 0.02). Peripheral vascular complications necessitating surgery, blood transfusion, or both were more frequent after stenting than after balloon angioplasty (13.5 vs. 3.1 percent, P < 0.001). The mean hospital stay was significantly longer in the stent group than in the angioplasty group (8.5 vs. 3.1 days, P < 0.001). Over seven months of follow-up, the clinical and angiographic outcomes were better in patients who received a stent than in those who received standard coronary angioplasty. However, this benefit was achieved at the cost of a significantly higher risk of vascular complications at the access site and a longer hospital stay.

A randomized comparison of coronary-stent placement and balloon angioplasty in the treatment of coronary artery disease. Stent Restenosis Study Investigators.

K Detre,  Harry M. Savage,  Martin Leon … (1994)
Coronary-stent placement is a new technique in which a balloon-expandable, stainless-steel, slotted tube is implanted at the site of a coronary stenosis. The purpose of this study was to compare the effects of stent placement and standard balloon angioplasty on angiographically detected restenosis and clinical outcomes. We randomly assigned 410 patients with symptomatic coronary disease to elective placement of a Palmaz-Schatz stent or to standard balloon angioplasty. Coronary angiography was performed at base line, immediately after the procedure, and six months later. The patients who underwent stenting had a higher rate of procedural success than those who underwent standard balloon angioplasty (96.1 percent vs. 89.6 percent, P = 0.011), a larger immediate increase in the diameter of the lumen (1.72 +/- 0.46 vs. 1.23 +/- 0.48 mm, P < 0.001), and a larger luminal diameter immediately after the procedure (2.49 +/- 0.43 vs. 1.99 +/- 0.47 mm, P < 0.001). At six months, the patients with stented lesions continued to have a larger luminal diameter (1.74 +/- 0.60 vs. 1.56 +/- 0.65 mm, P = 0.007) and a lower rate of restenosis (31.6 percent vs. 42.1 percent, P = 0.046) than those treated with balloon angioplasty. There were no coronary events (death; myocardial infarction; coronary-artery bypass surgery; vessel closure, including stent thrombosis; or repeated angioplasty) in 80.5 percent of the patients in the stent group and 76.2 percent of those in the angioplasty group (P = 0.16). Revascularization of the original target lesion because of recurrent myocardial ischemia was performed less frequently in the stent group than in the angioplasty group (10.2 percent vs. 15.4 percent, P = 0.06). In selected patients, placement of an intracoronary stent, as compared with balloon angioplasty, results in an improved rate of procedural success, a lower rate of angiographically detected restenosis, a similar rate of clinical events after six months, and a less frequent need for revascularization of the original coronary lesion.

Intravascular stents to prevent occlusion and restenosis after transluminal angioplasty.

V Mirkovitch,  J Puel,  L Kappenberger … (1987)
Occlusion and restenosis are the most common reasons that transluminal balloon angioplasty may fail to provide long-term benefit. An intravascular mechanical support was therefore developed with the aim of preventing restenosis and sudden closure of diseased arteries after angioplasty. The endoprosthesis consists of a self-expandable stainless-steel mesh that can be implanted nonsurgically in the coronary or peripheral arteries. Experiments in animals showed complete intimal coverage within weeks and no late thrombosis during a follow-up period of up to one year. We performed 10 implantations in 6 patients for iliac or femoral arterial disease; 24 coronary-artery stents were implanted in 19 patients who presented with coronary-artery restenoses (n = 17) or abrupt closure (n = 4) after transluminal angioplasty or deterioration of coronary-bypass grafts (n = 3). We observed three complications in the group with coronary disease. One thrombotic occlusion of a stent resulted in asymptomatic closure, a second acute thrombosis was managed successfully with thrombolysis, and one patient died after bypass surgery for a suspected but unfound occlusion. Follow-up in the patients has continued for nine months without evidence of any further restenoses within the stented segments. Our preliminary experience suggests that this vascular endoprosthesis may offer a useful way to prevent occlusion and restenosis after transluminal angioplasty. Long-term follow-up will be required to validate the early success of this procedure.