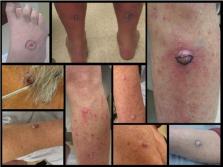 Jonathan Cotliar,  Christiane Querfeld,  William Boswell … (2016)
Introduction Pembrolizumab is a humanized antibody that targets the programmed cell death-1 (PD-1) receptor. It is currently approved by the US Food and Drug Administration for patients with advanced melanoma and metastatic non–small cell lung cancer. As an immune checkpoint inhibitor, pembrolizumab augments a patient's immune system against an underlying malignancy. Systemic toxicities associated with use of PD-1 inhibitors such as fatigue, pyrexia, chills, and infusion reactions have been commonly reported. 1 We report a case of sarcoidosis flare associated with pembrolizumab, which is, to our knowledge, the first reported case of sarcoidosis linked to PD-1 inhibition. Case report A 72-year-old woman with refractory, stage IV Hodgkin lymphoma diagnosed in 2014 was placed on pembrolizumab, 200 mg intravenously every 3 weeks. Twelve years prior, the patient had gallstone pancreatitis, and a chest x-ray at that time found bilateral hilar adenopathy. Subsequent mediastinoscopy and lymph node biopsy were notable for sarcoidosis, although the patient was never symptomatic and was never treated. Approximately 6 months after starting pembrolizumab, the patient presented to the dermatology clinic with slowly enlarging, asymptomatic subcutaneous nodules on her arms. Physical examination found 2 nontender, subcutaneous nodules on the right extensor forearm without overlying erythema, with the largest nodule measuring 10 cm in diameter (Fig 1, A). There was a similar, smaller nodule on the left forearm. Punch biopsy of the larger right forearm nodule found mild lymphohistiocytic perivascular dermatitis with a focal, dermal epithelioid granuloma (Fig 2, A and B). Infectious stains and tissue cultures were negative. Based on the clinical presentation and medical history, a diagnosis of cutaneous sarcoidosis was made. Pembrolizumab was held for the progressing skin lesions and a positron emission tomography/computed tomography scan was performed to reassess the status of the lymphoma. The imaging found new bilateral pulmonary parenchymal patchy ground glass opacities with septal thickening. There were also new hypermetabolic areas within multiple bones, including the left side of the scapula (Fig 3, A), sternum, and the right side of the iliac. Interval increases in fludeoxyglucose (FDG)-avid mediastinal and bilateral hilar lymph nodes (Fig 3, B), compared with 3 months prior were seen. It was unclear whether these changes were secondary to lymphoma or sarcoidosis. Soon thereafter, the patient had left eye pain, and evaluation by an ophthalmologist found acute iritis attributable to sarcoidosis. In addition, she had dyspnea and was referred to cardiothoracic surgery for consideration of video-assisted thoracoscopic surgery to determine the etiology of the dyspnea and adenopathy. However, the patient declined to pursue lung/lymph node biopsy. A decision was made to initiate an empiric trial of prednisone at a dose of 60 mg orally daily, to see if there would be a favorable clinical/radiographic response, based on the presumption that sarcoidosis induced by pembrolizumab, and not lymphoma, was the etiologic culprit for the clinical and imaging features. Shortly after the initiation of prednisone, the left eye pain and dyspnea resolved, and within 1 month, the skin nodules resolved (Fig 1, B). Reimaging performed approximately 3 months after the prior scans (1 month after starting prednisone) found complete resolution of the FDG-avid skeletal regions previously noted (Fig 3, C) as well as resolution of the hilar and mediastinal adenopathy (Fig 3, D). The patient's lymphoma is currently in complete remission since she stopped taking pembrolizumab for the last 4 months. Discussion Early reports of the PD-1 inhibitors pembrolizumab and nivolumab described exacerbation of psoriasis for patients with a previous history of skin disease and de novo development of psoriasis in patients who lacked both a personal and family history.2, 3, 4 More severe cutaneous toxicities such as Stevens-Johnson syndrome have also been reported. 5 A retrospective review of 82 patients treated with PD-1 inhibitors for metastatic melanoma found that 49% (40 of 82) of treated patients had some form of adverse cutaneous event, with lichenoid dermatitis (17%), eczematous dermatitis (17%), and vitiligo (15%) being the most common dermatoses. 6 In an additional retrospective case series of 83 patients, pembrolizumab use was associated with skin toxicity in 42% (35 of 83), with papular eruptions (29%) most common, followed by pruritus (12%), and hypopigmentation (8%). 7 Of particular concern, based on the method by which PD-1 inhibitors are effective in unleashing an individual's immune system against an underlying cancer, would be the exacerbation or de novo development of autoimmune disorders, cutaneous and systemic. Although there is evidence that patients with diseases such as Churg-Strauss can be treated successfully with PD-1 inhibition for melanoma without subsequent flare of their vasculitis, 8 there are also cases in which PD-1 inhibitor use has led to rapid progression of previously stable patients with autoimmune diseases such as myasthenia gravis. 9 Recent reports of the development of autoimmune blistering skin disorders such as bullous pemphigoid from PD-1 blockade provide additional concerns about the risk of autoimmune sequelae from immune checkpoint inhibitors. 10 Our case is notable beyond the fact that it is, to our knowledge, the first reported case of sarcoidosis flare associated with PD-1 blockade. It highlights the diagnostic difficulty of discerning the etiology of adverse events that may radiographically mimic the disease for which the PD-1 inhibitor is being used; sarcoidosis, like lymphoma, presents with increased FDG avidity on positron emission tomography/computed tomography scans. Our patient's skin nodules were bothersome, but the acute iritis and dyspnea necessitated prednisone use, which eventually led to the resolution of the clinical and imaging features. Without tissue confirmation of sarcoid involving the skin and the development of sarcoidal iritis, it is conceivable that the mediastinal, pulmonary, and skeletal lesions could have been falsely attributed to progression of the lymphoma. While our patient had a history of asymptomatic pulmonary sarcoidosis, the development of dyspnea, iritis, and subcutaneous nodules after several months of pembrolizumab use implicates PD-1 blockade in the progression of sarcoidosis in this circumstance. This case highlights the importance of being mindful of the spectrum of toxicities associated with PD-1 inhibitors and ensuring that these toxicities don't obfuscate a favorable clinical response. More importantly, it should raise awareness that PD-1 inhibition, although helpful in redeploying an individual's immune response against an underlying malignancy, may exacerbate underlying autoimmune conditions such as sarcoidosis, as an unexpected consequence.

Nivolumab-related cutaneous sarcoidosis in a patient with lung adenocarcinoma