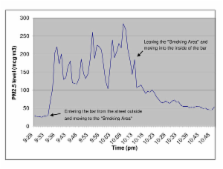 We included 34 pubs, restaurants and bars, 10 transportation settings, nine other indoor settings, six outdoor smoking areas of bars and restaurants, and six other outdoor settings. These were selected using a mix of random, convenience and purposeful sampling. The number of lit cigarettes among occupants at defined time points in each venue was observed and a portable real-time aerosol monitor was used to measure fine particulate levels (PM 2.5).

No smoking was observed during the data collection periods among over 3785 people present in the indoor venues, nor in any of the transportation settings. The levels of fine particulates were relatively low inside the bars, pubs and restaurants in the urban and rural settings (mean 30-minute level = 16 μg/m 3 for 34 venues; range of mean levels for each category: 13 μg/m 3 to 22 μg/m 3). The results for other smokefree indoor settings (shops, offices etc) and for smokefree transportation settings (eg, buses, trains, etc) were even lower. However, some "outdoor" smoking areas attached to bars/restaurants had high levels of fine particulates, especially those that were partly enclosed (eg, up to a 30-minute mean value of 182 μg/m 3 and a peak of maximum value of 284 μg/m 3). The latter are far above WHO guideline levels for 24-hour exposure (ie, 25μg/m 3).

There was very high compliance with the new national smokefree law and this was also reflected by the relatively good indoor air quality in hospitality settings (compared to the "outdoor" smoking areas and the comparable settings in countries that permit indoor smoking). Nevertheless, adopting enhanced regulations (as used in various US and Canadian jurisdictions) may be needed to address hazardous air quality in relatively enclosed "outdoor" smoking areas.

Anna Petroeschevsky, Joel Schwartz, A Hamish R W Simpson … (2005)
The strength of the association between outdoor air pollution and hospital admissions in children has not yet been well defined. To estimate the impact of outdoor air pollution on respiratory morbidity in children after controlling for the confounding effects of weather, season, and other pollutants. The study used data on respiratory hospital admissions in children (three age groups: < 1, 1-4, and 5-14 years) for five cities in Australia and two in New Zealand. Time series of daily numbers of hospital admissions were analyzed using the case-crossover method; the results from cities were combined using a random-effects meta-analysis. Significant increases across the cities were observed for hospital admissions in children for pneumonia and acute bronchitis (0, 1-4 years), respiratory disease (0, 1-4, 5-14 years), and asthma (5-14 years). These increases were found for particulate matter with a diameter less than 2.5 microm (PM2.5) and less than 10 microm (PM10), nephelometry, NO2, and SO2. The largest association found was a 6.0% increase in asthma admissions (5-14 years) in relation to a 5.1-ppb increase in 24-hour NO2. This study found strong and consistent associations between outdoor air pollution and short-term increases in childhood hospital admissions. A number of different pollutants showed significant associations, and these were distinct from any temperature (warm or cool) effects.

Legislation for smoke-free workplaces and health of bar workers in Ireland: before and after study.

Effects of the Irish smoking ban on respiratory health of bar workers and air quality in Dublin pubs.

Patrick Goodman, Michelle Agnew, Marie McCaffrey … (2007)
Environmental tobacco smoke (ETS) causes disease in nonsmokers. Workplace bans on smoking are interventions to reduce exposure to ETS to try to prevent harmful health effects. On March 29, 2004, the Irish government introduced the first national comprehensive legislation banning smoking in all workplaces, including bars and restaurants. This study examines the impact of this legislation on air quality in pubs and on respiratory health effects in bar workers in Dublin. Exposure study. Concentrations of particulate matter 2.5 microm or smaller (PM(2.5)) and particulate matter 10 microm or smaller (PM(10)) in 42 pubs were measured and compared before and after the ban. Benzene concentrations were also measured in 26 of the pubs. Health effects study. Eighty-one barmen volunteered to have full pulmonary function studies, exhaled breath carbon monoxide, and salivary cotinine levels performed before the ban and repeated 1 year after the ban. They also completed questionnaires on exposure to ETS and respiratory symptoms on both occasions. Exposure study. There was an 83% reduction in PM(2.5) and an 80.2% reduction in benzene concentration in the bars. Health effects study. There was a 79% reduction in exhaled breath carbon monoxide and an 81% reduction in salivary cotinine. There were statistically significant improvements in measured pulmonary function tests and significant reductions in self-reported symptoms and exposure levels in nonsmoking barmen volunteers after the ban. A total workplace smoking ban results in a significant reduction in air pollution in pubs and an improvement in respiratory health in barmen.