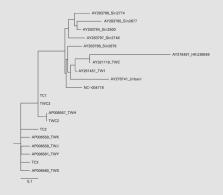 We sequenced the genomes of SARS-CoV from 3 clinical specimens obtained in Taiwan. The sequences were similar to those reported by other groups, except that 17 single nucleotide variations and two 2-nucleotide deletions, and a 1-nucleotide deletion were found. All the variations in the clinical specimens did not alter the amino acid sequence. Of these 17 sequenced variants, two loci (positions 26203 and 27812) were segregated together as a specific genotype-T:T or C:C. Phylogenetic analysis showed two major clusters of SARS patients in Taiwan.

We developed a very economical and rapid method to sequence the whole genome of SARS-CoV, which can avoid cultural influence. From our results, SARS patients in Taiwan may be infected from two different origins.

Sandy Finkelstein,  Susan M Poutanen,  Bonnie Henry … (2003)
Severe acute respiratory syndrome (SARS) is a condition of unknown cause that has recently been recognized in patients in Asia, North America, and Europe. This report summarizes the initial epidemiologic findings, clinical description, and diagnostic findings that followed the identification of SARS in Canada. SARS was first identified in Canada in early March 2003. We collected epidemiologic, clinical, and diagnostic data from each of the first 10 cases prospectively as they were identified. Specimens from all cases were sent to local, provincial, national, and international laboratories for studies to identify an etiologic agent. The patients ranged from 24 to 78 years old; 60 percent were men. Transmission occurred only after close contact. The most common presenting symptoms were fever (in 100 percent of cases) and malaise (in 70 percent), followed by nonproductive cough (in 100 percent) and dyspnea (in 80 percent) associated with infiltrates on chest radiography (in 100 percent). Lymphopenia (in 89 percent of those for whom data were available), elevated lactate dehydrogenase levels (in 80 percent), elevated aspartate aminotransferase levels (in 78 percent), and elevated creatinine kinase levels (in 56 percent) were common. Empirical therapy most commonly included antibiotics, oseltamivir, and intravenous ribavirin. Mechanical ventilation was required in five patients. Three patients died, and five have had clinical improvement. The results of laboratory investigations were negative or not clinically significant except for the amplification of human metapneumovirus from respiratory specimens from five of nine patients and the isolation and amplification of a novel coronavirus from five of nine patients. In four cases both pathogens were isolated. SARS is a condition associated with substantial morbidity and mortality. It appears to be of viral origin, with patterns suggesting droplet or contact transmission. The role of human metapneumovirus, a novel coronavirus, or both requires further investigation. Copyright 2003 Massachusetts Medical Society

Yijun Ruan,  Chia Wei,  Ai Ling … (2003)
Summary Background The cause of severe acute respiratory syndrome (SARS) has been identified as a new coronavirus. Whole genome sequence analysis of various isolates might provide an indication of potential strain differences of this new virus. Moreover, mutation analysis will help to develop effective vaccines. Methods We sequenced the entire SARS viral genome of cultured isolates from the index case (SIN2500) presenting in Singapore, from three primary contacts (SIN2774, SIN2748, and SIN2677), and one secondary contact (SIN2679). These sequences were compared with the isolates from Canada (TOR2), Hong Kong (CUHK-W1 and HKU39849), Hanoi (URBANI), Guangzhou (GZ01), and Beijing (BJ01, BJ02, BJ03, BJ04). Findings We identified 129 sequence variations among the 14 isolates, with 16 recurrent variant sequences. Common variant sequences at four loci define two distinct genotypes of the SARS virus. One genotype was linked with infections originating in Hotel M in Hong Kong, the second contained isolates from Hong Kong, Guangzhou, and Beijing with no association with Hotel M (p<0.0001). Moreover, other common sequence variants further distinguished the geographical origins of the isolates, especially between Singapore and Beijing. Interpretation Despite the recent onset of the SARS epidemic, genetic signatures are emerging that partition the worldwide SARS viral isolates into groups on the basis of contact source history and geography. These signatures can be used to trace sources of infection. In addition, a common variant associated with a non-conservative aminoacid change in the S1 region of the spike protein, suggests that immunological pressures might be starting to influence the evolution of the SARS virus in human populations. Published online May 9, 2003 http://image.thelancet.com/extras/03art4454web.pdf

Simultaneous detection of influenza A, B, and C viruses, respiratory syncytial virus, and adenoviruses in clinical samples by multiplex reverse transcription nested-PCR assay.

Inmaculada Casas,  Susana Garcia,  P. Rodriguez Perez … (2002)
The clinical presentation of infections caused by the heterogeneous group of the respiratory viruses can be very similar. Thus, the implementation of virological assays that rapidly identify the most important viruses involved is of great interest. A new multiplex reverse transcription nested-polymerase chain reaction (RT-PCR) assay that is able to detect and type different respiratory viruses simultaneously is described. Primer sets were targeted to conserved regions of nucleoprotein genes of the influenza viruses, fusion protein genes of respiratory syncytial viruses (RSV), and hexon protein genes of adenoviruses. Individual influenza A, B, and C viruses, RSV (A and B), and a generic detection of the 48 serotypes of adenoviruses were identified and differentiated by the size of the PCR products. An internal amplification control was included in the reaction mixture to exclude false-negative results due to sample inhibitors and/or extraction failure. Detection levels of 0.1 and 0.01 TCID50 of influenza A and B viruses and 1-10 molecules of cloned amplified products of influenza C virus, RSV A and B, and adenovirus serotype 1 were achieved. The specificity was checked using specimens containing other respiratory viruses and no amplified products were detected in any case. A panel of 290 respiratory specimens from the 1999-2000 and 2000-2001 seasons was used to validate the assay. Accurately amplifying RNA from influenza and RSV prototype strains and DNA from all adenovirus serotypes demonstrates the use of this method for both laboratory routine diagnosis and surveillance of all these viruses. Copyright 2003 Wiley-Liss, Inc.