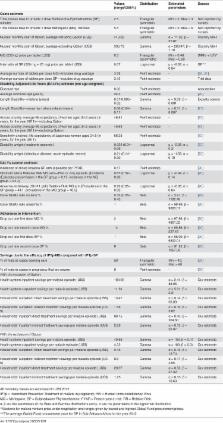 Intermittent preventive treatment in pregnancy (IPTp) with sulfadoxine-pyrimethamine (SP) is recommended in HIV-negative women to avert malaria, while this relies on cotrimoxazole prophylaxis (CTXp) in HIV-positive women. Alternative antimalarials are required in areas where parasite resistance to antifolate drugs is high. The cost-effectiveness of IPTp with alternative drugs is needed to inform policy.

The cost-effectiveness of 2-dose IPTp-mefloquine (MQ) was compared with IPTp-SP in HIV-negative women (Benin, Gabon, Mozambique and Tanzania). In HIV-positive women the cost-effectiveness of 3-dose IPTp-MQ added to CTXp was compared with CTXp alone (Kenya, Mozambique and Tanzania). The outcomes used were maternal clinical malaria, anaemia at delivery and non-obstetric hospital admissions. The poor tolerability to MQ was included as the value of women’s loss of working days. Incremental cost-effectiveness ratios (ICERs) were calculated and threshold analysis undertaken.

Quantifying the Number of Pregnancies at Risk of Malaria in 2007: A Demographic Study

Andrew H Briggs,  Milton C. Weinstein,  Elisabeth Fenwick … (2016)
A model's purpose is to inform medical decisions and health care resource allocation. Modelers employ quantitative methods to structure the clinical, epidemiological, and economic evidence base and gain qualitative insight to assist decision makers in making better decisions. From a policy perspective, the value of a model-based analysis lies not simply in its ability to generate a precise point estimate for a specific outcome but also in the systematic examination and responsible reporting of uncertainty surrounding this outcome and the ultimate decision being addressed. Different concepts relating to uncertainty in decision modeling are explored. Stochastic (first-order) uncertainty is distinguished from both parameter (second-order) uncertainty and from heterogeneity, with structural uncertainty relating to the model itself forming another level of uncertainty to consider. The article argues that the estimation of point estimates and uncertainty in parameters is part of a single process and explores the link between parameter uncertainty through to decision uncertainty and the relationship to value-of-information analysis. The article also makes extensive recommendations around the reporting of uncertainty, both in terms of deterministic sensitivity analysis techniques and probabilistic methods. Expected value of perfect information is argued to be the most appropriate presentational technique, alongside cost-effectiveness acceptability curves, for representing decision uncertainty from probabilistic analysis.

Effect of sulfadoxine-pyrimethamine resistance on the efficacy of intermittent preventive therapy for malaria control during pregnancy: a systematic review.

‡ These authors are joint senior authors on this work.

This study was supported by MiP Consortium, which is funded through a grant from the Bill & Melinda Gates Foundation to the Liverpool School of Tropical Medicine.

Data Availability Data cannot be made available due to ethical restrictions and restrictions in the consent forms signed by participants. Data are available upon request from Clara Menendez ( clara.menendez@ 123456isglobal.org ).
Data availability:
ScienceOpen disciplines: Uncategorized