Bats Use Magnetite to Detect the Earth's Magnetic Field 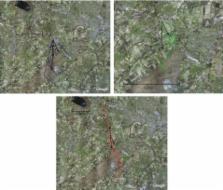 While the role of magnetic cues for compass orientation has been confirmed in numerous animals, the mechanism of detection is still debated. Two hypotheses have been proposed, one based on a light dependent mechanism, apparently used by birds and another based on a “compass organelle” containing the iron oxide particles magnetite (Fe 3O 4). Bats have recently been shown to use magnetic cues for compass orientation but the method by which they detect the Earth's magnetic field remains unknown. Here we use the classic “Kalmijn-Blakemore” pulse re-magnetization experiment, whereby the polarity of cellular magnetite is reversed. The results demonstrate that the big brown bat Eptesicus fuscus uses single domain magnetite to detect the Earths magnetic field and the response indicates a polarity based receptor. Polarity detection is a prerequisite for the use of magnetite as a compass and suggests that big brown bats use magnetite to detect the magnetic field as a compass. Our results indicate the possibility that sensory cells in bats contain freely rotating magnetite particles, which appears not to be the case in birds. It is crucial that the ultrastructure of the magnetite containing magnetoreceptors is described for our understanding of magnetoreception in animals.

R Blakemore (1975)
Bacteria with motility directed by the local geomagnetic field have been observed in marine sediments. These magnetotactic microorganisms possess flagella and contain novel structured particles, rich in iron, within intracytoplasmic membrane vesicles. Conceivably these particles impart to cells a magnetic moment. This could explain the observed migration of these organisms in fields as weak as 0.5 gauss.

Henrik Mouritsen,  Lauren Cochran,  Martin Wikelski (2004)
Night migratory songbirds can use stars, sun, geomagnetic field, and polarized light for orientation when tested in captivity. We studied the interaction of magnetic, stellar, and twilight orientation cues in free-flying songbirds. We exposed Catharus thrushes to eastward-turned magnetic fields during the twilight period before takeoff and then followed them for up to 1100 kilometers. Instead of heading north, experimental birds flew westward. On subsequent nights, the same individuals migrated northward again. We suggest that birds orient with a magnetic compass calibrated daily from twilight cues. This could explain how birds cross the magnetic equator and deal with declination.

Publisher ID: 07-PONE-RA-02533R2
DOI: 10.1371/journal.pone.0001676
PMC ID: 2246016
PubMed ID: 18301753
Copyright statement: Holland et al. This is an open-access article distributed under the terms of the Creative Commons Attribution License, which permits unrestricted use, distribution, and reproduction in any medium, provided the original author and source are credited.