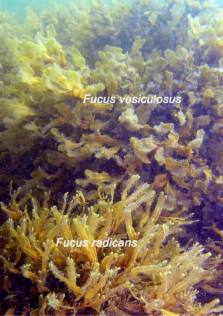 Theory predicts that speciation can be quite rapid. Previous examples comprise a wide range of organisms such as sockeye salmon, polyploid hybrid plants, fruit flies and cichlid fishes. However, few studies have shown natural examples of rapid evolution giving rise to new species in marine environments.

Using microsatellite markers, we show the evolution of a new species of brown macroalga ( Fucus radicans) in the Baltic Sea in the last 400 years, well after the formation of this brackish water body ~8–10 thousand years ago. Sympatric individuals of F. radicans and F. vesiculosus (bladder wrack) show significant reproductive isolation. Fucus radicans, which is endemic to the Baltic, is most closely related to Baltic Sea F. vesiculosus among north Atlantic populations, supporting the hypothesis of a recent divergence. Fucus radicans exhibits considerable clonal reproduction, probably induced by the extreme conditions of the Baltic. This reproductive mode is likely to have facilitated the rapid foundation of the new taxon.

This study represents an unparalleled example of rapid speciation in a species-poor open marine ecosystem and highlights the importance of increasing our understanding on the role of these habitats in species formation. This observation also challenges presumptions that rapid speciation takes place only in hybrid plants or in relatively confined geographical places such as postglacial or crater lakes, oceanic islands or rivers.

Marta Barluenga,  Walter Salzburger,  Kai N Stölting … (2006)
Sympatric speciation, the formation of species in the absence of geographical barriers, remains one of the most contentious concepts in evolutionary biology. Although speciation under sympatric conditions seems theoretically possible, empirical studies are scarce and only a few credible examples of sympatric speciation exist. Here we present a convincing case of sympatric speciation in the Midas cichlid species complex (Amphilophus sp.) in a young and small volcanic crater lake in Nicaragua. Our study includes phylogeographic, population-genetic (based on mitochondrial DNA, microsatellites and amplified fragment length polymorphisms), morphometric and ecological analyses. We find, first, that crater Lake Apoyo was seeded only once by the ancestral high-bodied benthic species Amphilophus citrinellus, the most common cichlid species in the area; second, that a new elongated limnetic species (Amphilophus zaliosus) evolved in Lake Apoyo from the ancestral species (A. citrinellus) within less than approximately 10,000 yr; third, that the two species in Lake Apoyo are reproductively isolated; and fourth, that the two species are eco-morphologically distinct.

Life on the margin: genetic isolation and diversity loss in a peripheral marine ecosystem, the Baltic Sea.

Kerstin Johannesson,  Carl André (2006)
Marginal populations are often isolated and under extreme selection pressures resulting in anomalous genetics. Consequently, ecosystems that are geographically and ecologically marginal might have a large share of genetically atypical populations, in need of particular concern in management of these ecosystems. To test this prediction, we analysed genetic data from 29 species inhabiting the low saline Baltic Sea, a geographically and ecologically marginal ecosystem. On average Baltic populations had lost genetic diversity compared to Atlantic populations: a pattern unrelated to dispersal capacity, generation time of species and taxonomic group of organism, but strongly related to type of genetic marker (mitochondrial DNA loci had lost c. 50% diversity, and nuclear loci 10%). Analyses of genetic isolation by geographic distance revealed clinal patterns of differentiation between Baltic and Atlantic regions. For a majority of species, clines were sigmoid with a sharp slope around the Baltic Sea entrance, indicating impeded gene flows between Baltic and Atlantic populations. Some species showed signs of allele frequencies being perturbed at the edge of their distribution inside the Baltic Sea. Despite the short geological history of the Baltic Sea (8000 years), populations inhabiting the Baltic have evolved substantially different from Atlantic populations, probably as a consequence of isolation and bottlenecks, as well as selection on adaptive traits. In addition, the Baltic Sea also acts a refuge for unique evolutionary lineages. This marginal ecosystem is thus vulnerable but also exceedingly valuable, housing unique genes, genotypes and populations that constitute an important genetic resource for management and conservation.