Hepatic angiomyolipoma: differential diagnosis from other liver tumors in a special reference to vascular imaging - importance of early drainage vein 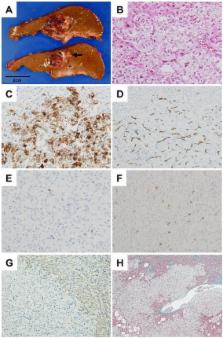 A 51-year-old female had been diagnosed with a hemangioma in the hepatic segment 6 (S6). After a 6-year follow-up, enlargement of the tumor was detected. The tumor was clearly enhanced in the arterial phase, and the enhancement remained in the portal phase on computed tomography (CT). Although the primary differential diagnosis on CT was hepatocellular carcinoma (HCC), we worried about the possibility of other vessel system tumors because the tumor remained to be enhanced at the portal phase for HCC and all tumor markers of HCC were negative. We performed angiography to determine the tumor nature and to seek other tumors. Angiography showed tumor stain at the hepatic S6 with an early obvious drainage vein from the tumor flowing through the right hepatic vein into the inferior vena cava. In addition to tumor stain and the drainage vein, there were many small poolings of contrast medium in the whole liver, which were suspected as dilatation of the hepatic peripheral artery. We suspected the tumor as a benign tumor such as hepatocellular adenoma or focal nodular hyperplasia, but the possibility of HCC could not be ruled out. Hepatic posterior sectionectomy was done to completely remove the drainage vein with the tumor. Intraoperative histological examination revealed the tumor as not malignant and not HCC. Later, immunohistochemical analysis uncovered that the tumor had high expression of HMB-45 and, therefore, the final diagnosis was angiomyolipoma. We think that detecting an early drainage vein from the tumor would be a key point for diagnosing hepatic angiomyolipoma.

Identification and characterization of the tuberous sclerosis gene on chromosome 16.

(1993)
Tuberous sclerosis (TSC) is an autosomal dominant multisystem disorder with loci assigned to chromosomes 9 and 16. Using pulsed-field gel electrophoresis (PFGE), we identified five TSC-associated deletions at 16p13.3. These were mapped to a 120 kb region that was cloned in cosmids and from which four genes were isolated. One gene, designated TSC2, was interrupted by all five PFGE deletions, and closer examination revealed several intragenic mutations, including one de novo deletion. In this case, Northern blot analysis identified a shortened transcript, while reduced expression was observed in another TSC family, confirming TSC2 as the chromosome 16 TSC gene. The 5.5 kb TSC2 transcript is widely expressed, and its protein product, tuberin, has a region of homology to the GTPase-activating protein GAP3.

Identification of the tuberous sclerosis gene TSC1 on chromosome 9q34.

S Jeremiah,  C Munro,  J Kwiatkowska … (1997)
Tuberous sclerosis complex (TSC) is an autosomal dominant disorder characterized by the widespread development of distinctive tumors termed hamartomas. TSC-determining loci have been mapped to chromosomes 9q34 (TSC1) and 16p13 (TSC2). The TSC1 gene was identified from a 900-kilobase region containing at least 30 genes. The 8.6-kilobase TSC1 transcript is widely expressed and encodes a protein of 130 kilodaltons (hamartin) that has homology to a putative yeast protein of unknown function. Thirty-two distinct mutations were identified in TSC1, 30 of which were truncating, and a single mutation (2105delAAAG) was seen in six apparently unrelated patients. In one of these six, a somatic mutation in the wild-type allele was found in a TSC-associated renal carcinoma, which suggests that hamartin acts as a tumor suppressor.

Michael Eble (1998)
Angiomyolipoma of the kidney is a clonal neoplasm, apparently part of a family of neoplasms derived from perivascular epithelioid cells. Early angiomyolipomas are small nodules composed of HMB-45-reactive spindle cells in the renal capsule, cortex, or medulla. Most angiomyolipomas are asymptomatic, and they are more common than previously appreciated, approaching 13 per 10,000 adults. They are much more prevalent in patients with tuberous sclerosis, where they often are accompanied by cysts and occasionally by renal cell carcinoma. That they are rarely diagnosed before puberty in patients without tuberous sclerosis, that large ones are more common in women than men, and that they occasionally grow rapidly during pregnancy suggest that hormones may play a role in stimulating the growth of angiomyolipoma. Pathologists should recognize that the presence of multiple angiomyolipomas is, at the least, presumptive evidence for the diagnosis of tuberous sclerosis and include this in their reports. Typical angiomyolipomas are benign but may have alarming properties: nuclear pleomorphism and mitotic activity, extension into the vena cava (21 cases), and spread to regional lymph nodes (39 cases), without malignant progression. The most common serious complication of renal angiomyolipoma is hemorrhage. Epithelioid angiomyolipoma is a recently recognized variant with malignant potential. Angiomyolipoma and lymphangiomyoma are closely related, and tumors with features of both have occurred. Angiomyolipomas have occurred in other organs in association with renal angiomyolipoma.