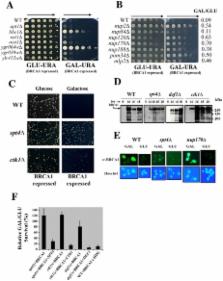 Functional characterization of the S. cerevisiae genome by gene deletion and parallel analysis.

Julia F. Dietrich,  P Philippsen,  E Gentalen … (1999)
The functions of many open reading frames (ORFs) identified in genome-sequencing projects are unknown. New, whole-genome approaches are required to systematically determine their function. A total of 6925 Saccharomyces cerevisiae strains were constructed, by a high-throughput strategy, each with a precise deletion of one of 2026 ORFs (more than one-third of the ORFs in the genome). Of the deleted ORFs, 17 percent were essential for viability in rich medium. The phenotypes of more than 500 deletion strains were assayed in parallel. Of the deletion strains, 40 percent showed quantitative growth defects in either rich or minimal medium.

Cancer susceptibility and the functions of BRCA1 and BRCA2.

Ashok R. Venkitaraman (2002)
Inherited mutations in BRCA1 or BRCA2 predispose to breast, ovarian, and other cancers. Their ubiquitously expressed protein products are implicated in processes fundamental to all cells, including DNA repair and recombination, checkpoint control of cell cycle, and transcription. Here, I examine what is known about the biological functions of the BRCA proteins and ask how their disruption can induce susceptibility to specific types of cancer.

Ujwal Sheth,  Roy Parker (2003)
A major pathway of eukaryotic messenger RNA (mRNA) turnover begins with deadenylation, followed by decapping and 5' to 3' exonucleolytic decay. We provide evidence that mRNA decapping and 5' to 3' degradation occur in discrete cytoplasmic foci in yeast, which we call processing bodies (P bodies). First, proteins that activate or catalyze decapping are concentrated in P bodies. Second, inhibiting mRNA turnover before decapping leads to loss of P bodies; however, inhibiting turnover at, or after, decapping, increases the abundance and size of P bodies. Finally, mRNA degradation intermediates are localized to P bodies. These results define the flux of mRNAs between polysomes and P bodies as a critical aspect of cytoplasmic mRNA metabolism and a possible site for regulation of mRNA degradation.

Publisher ID: 07-PONE-RA-01638R1
DOI: 10.1371/journal.pone.0001448
PMC ID: 2174531
PubMed ID: 18197258
Copyright statement: Bennett et al. This is an open-access article distributed under the terms of the Creative Commons Attribution License, which permits unrestricted use, distribution, and reproduction in any medium, provided the original author and source are credited.