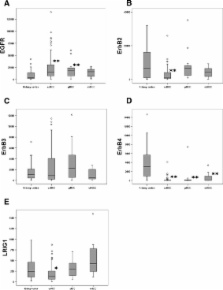 Previous studies have revealed altered expression of epidermal growth factor receptor (EGFR)-family members and their endogenous inhibitor leucine-rich and immunoglobulin-like domains 1 (LRIG1) in renal cell carcinoma (RCC). In this study, we analyzed the gene expression levels of EGFR-family members and LRIG1, and their possible associations with clinical parameters in various types of RCC.

Yosef Yarden,  Håkan Hedman,  G Gür … (2004)
Kekkon proteins negatively regulate the epidermal growth factor receptor (EGFR) during oogenesis in Drosophila. Their structural relative in mammals, LRIG1, is a transmembrane protein whose inactivation in rodents promotes skin hyperplasia, suggesting involvement in EGFR regulation. We report upregulation of LRIG1 transcript and protein upon EGF stimulation, and physical association of the encoded protein with the four EGFR orthologs of mammals. Upregulation of LRIG1 is followed by enhanced ubiquitylation and degradation of EGFR. The underlying mechanism involves recruitment of c-Cbl, an E3 ubiquitin ligase that simultaneously ubiquitylates EGFR and LRIG1 and sorts them for degradation. We conclude that LRIG1 evolved in mammals as a feedback negative attenuator of signaling by receptor tyrosine kinases.

Colleen Sweeney,  Kermit Carraway,  Melanie Laederich … (2004)
The molecular mechanisms by which mammalian receptor tyrosine kinases are negatively regulated remain largely unexplored. Previous genetic and biochemical studies indicate that Kekkon-1, a transmembrane protein containing leucine-rich repeats and an immunoglobulin-like domain in its extracellular region, acts as a feedback negative regulator of epidermal growth factor (EGF) receptor signaling in Drosophila melanogaster development. Here we tested whether the related human LRIG1 (also called Lig-1) protein can act as a negative regulator of EGF receptor and its relatives, ErbB2, ErbB3, and ErbB4. We observed that in co-transfected 293T cells, LRIG1 forms a complex with each of the ErbB receptors independent of growth factor binding. We further observed that co-expression of LRIG1 with EGF receptor suppresses cellular receptor levels, shortens receptor half-life, and enhances ligand-stimulated receptor ubiquitination. Finally, we observed that co-expression of LRIG1 suppresses EGF-stimulated transformation of NIH3T3 fibroblasts and that the inducible expression of LRIG1 in PC3 prostate tumor cells suppresses EGF- and neuregulin-1-stimulated cell cycle progression. Our observations indicate that LRIG1 is a negative regulator of the ErbB family of receptor tyrosine kinases and suggest that LRIG1-mediated receptor ubiquitination and degradation may contribute to the suppression of ErbB receptor function.

Manon Van Roest,  Olaf Schouten,  Patricia M. M. B. Soetekouw … (2008)
Renal cell carcinoma (RCC) is not a single disease, but comprises a group of tumors of renal epithelial origin, each with a different histology, displaying a different clinical course and caused by different genetic alterations. Since cure rates are inversely associated with stage and response to the available treatment regimes is limited to a subgroup of patients, diagnostic methods facilitating early detection and new therapeutic modalities are necessary. Increased knowledge of the underlying pathophysiology of RCC has resulted in the identification of genetic alterations involved in renal cell cancer carcinogenesis. Promising agents to target these pathways, especially the angiogenesis pathway, are being developed, some of which are already standard of care. In addition to genetics, knowledge on epigenetics in the process of renal tumorigenesis has been significantly increased in the last decades. Epigenetics will play an increasing role in the development of new therapeutic modalities and may deliver new prognostic and early diagnostic markers. In this review we discuss the background of RCC and the clinical applications of RCC genetics and epigenetics.