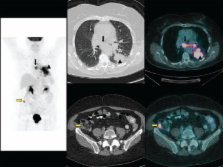 Accurate diagnosis and staging are essential for the optimal management of cancer patients. Positron emission tomography with 2-deoxy-2-[fluorine-18]fluoro- D-glucose integrated with computed tomography ( 18F-FDG PET/CT) has emerged as a powerful imaging tool for the detection of various cancers. The combined acquisition of PET and CT has synergistic advantages over PET or CT alone and minimizes their individual limitations. It is a valuable tool for staging and restaging of some tumors and has an important role in the detection of recurrence in asymptomatic patients with rising tumor marker levels and patients with negative or equivocal findings on conventional imaging techniques. It also allows for monitoring response to therapy and permitting timely modification of therapeutic regimens. In about 27% of the patients, the course of managment is changed. This review provides guidance for oncologists/ radiotherapists and clinical and surgical specialists on the use of 18F-FDG PET/CT in oncology.

Postoperative concurrent radiotherapy and chemotherapy for high-risk squamous-cell carcinoma of the head and neck.

Patty Fu,  Eung Kim,  Vaughn Cooper … (2004)
Despite the use of resection and postoperative radiotherapy, high-risk squamous-cell carcinoma of the head and neck frequently recurs in the original tumor bed. We tested the hypothesis that concurrent postoperative administration of cisplatin and radiotherapy would improve the rate of local and regional control. Between September 9, 1995, and April 28, 2000, 459 patients were enrolled. After undergoing total resection of all visible and palpable disease, 231 patients were randomly assigned to receive radiotherapy alone (60 to 66 Gy in 30 to 33 fractions over a period of 6 to 6.6 weeks) and 228 patients to receive the identical treatment plus concurrent cisplatin (100 mg per square meter of body-surface area intravenously on days 1, 22, and 43). After a median follow-up of 45.9 months, the rate of local and regional control was significantly higher in the combined-therapy group than in the group given radiotherapy alone (hazard ratio for local or regional recurrence, 0.61; 95 percent confidence interval, 0.41 to 0.91; P=0.01). The estimated two-year rate of local and regional control was 82 percent in the combined-therapy group, as compared with 72 percent in the radiotherapy group. Disease-free survival was significantly longer in the combined-therapy group than in the radiotherapy group (hazard ratio for disease or death, 0.78; 95 percent confidence interval, 0.61 to 0.99; P=0.04), but overall survival was not (hazard ratio for death, 0.84; 95 percent confidence interval, 0.65 to 1.09; P=0.19). The incidence of acute adverse effects of grade 3 or greater was 34 percent in the radiotherapy group and 77 percent in the combined-therapy group (P<0.001). Four patients who received combined therapy died as a direct result of the treatment. Among high-risk patients with resected head and neck cancer, concurrent postoperative chemotherapy and radiotherapy significantly improve the rates of local and regional control and disease-free survival. However, the combined treatment is associated with a substantial increase in adverse effects. Copyright 2004 Massachusetts Medical Society

Postoperative irradiation with or without concomitant chemotherapy for locally advanced head and neck cancer.

Caterina Stelitano,  Mads Hansen,  Francesco Merli … (2007)
Starting from November 2001, 260 newly diagnosed patients with Hodgkin's lymphoma (HL) were consecutively enrolled in parallel Italian and Danish prospective trials to evaluate the prognostic role of an early interim 2-[(18)F]fluoro-2-deoxy-D-glucose positron emission tomography (FDG-PET) scan and the International Prognostic Score (IPS) in advanced HL, treated with conventional ABVD (doxorubicin, bleomycin, vinblastine, and dacarbazine) therapy. Most patients (n = 190) presented with advanced disease (stages IIB through IVB), whereas 70 presented in stage IIA with adverse prognostic factors. All but 11 patients were treated with standard ABVD therapy followed by consolidation radiotherapy in case of bulky presentation or residual tumor mass. Conventional radiologic staging was performed at baseline. FDG-PET scan was performed at baseline and after two courses of ABVD (PET-2). No treatment change was allowed on the basis of the PET-2 results. After a median follow-up of 2.19 years (range, 0.32 to 5.18 years), 205 patients were in continued complete remission and two patients were in partial remission. Forty-three patients progressed during therapy or immediately after, whereas 10 patients relapsed. The 2-year progression-free survival for patients with positive PET-2 results was 12.8% and for patients with negative PET-2 results was 95.0% (P < .0001). In univariate analysis, the treatment outcome was significantly associated with PET-2 (P < .0001), stage IV (P < .0001), WBC more than 15,000 (P < .0001), lymphopenia (P < .001), IPS as a continuous variable (P < .0001), extranodal involvement (P < .0001), and bulky disease (P = .012). In multivariate analyses, only PET-2 turned out to be significant (P < .0001). PET-2 overshadows the prognostic value of IPS and emerges as the single most important tool for planning of risk-adapted treatment in advanced HL.