Variation in mode of physical activity by ethnicity and time since immigration: a cross-sectional analysis 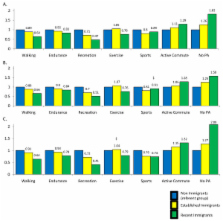 Journal: The International Journal of Behavioral Nutrition and Physical Activity

Physical activity (PA) levels are known to be significantly lower in ethnic minority and immigrant groups living in North America and Europe compared to the general population. While there has been an increase in the number of interventions targeting these groups, little is known about their preferred modes of PA.

Ethnic minority groups and immigrants in Canada tend to participate in conventional forms of exercise compared to Whites and non-immigrants and are less likely to engage in endurance exercise, recreation activities, and sports. Health promotion initiatives targeting ethnic and immigrant groups at high-risk for physical inactivity and chronic disease should consider mode of PA preference in intervention development.

Insights into the 'healthy immigrant effect': health status and health service use of immigrants to Canada.

Kyle J. McDonald,  S Kennedy (2004)
This paper combines multiple cross-sections of data drawn from the National Population Health Survey and Canadian Community Health Survey to confirm the existence of the 'healthy immigrant effect', specifically that immigrants are in relatively better health on arrival in Canada compared to native-born Canadians, and that immigrant health converges with years in Canada to native-born levels. The paper finds robust evidence that the healthy immigrant effect is present for the incidence of chronic conditions for both men and women, and results in relatively slow convergence to native-born levels. There is only weak evidence in terms of self-assessed health status. The inclusion of controls for region of origin and year of arrival does not account for the observed effects, although region of origin is an important determinants of immigrant health. The paper then considers some alternative explanations for the observed differences, and support is found for the idea that the healthy immigrant effect reflects convergence in physical health rather than convergence in screening and detection of existing health problems.

The Analysis of Residuals in Cross-Classified Tables

The metabolic syndrome in South Asians: epidemiology, determinants, and prevention.

Anoop Misra,  Lokesh Khurana (2009)
The prevalence of obesity and the metabolic syndrome is rapidly increasing in India and other south Asian countries, leading to increased morbidity and mortality due to type 2 diabetes mellitus (T2DM) and cardiovascular disease (CVD). The literature search has been carried out using the key words "insulin resistance, the metabolic syndrome, cardiovascular risk, diabetes, obesity, Asian Indians, and South Asians" in the medical search engine Pubmed (National Library of Medicine, Bethesda, MD) from 1966 to September 2009. A high prevalence of the metabolic syndrome and associated cardiovascular risk factors has been observed not only in urban South Asian/Asian Indian adults and children but also in economically disadvantaged people residing in urban slums and rural areas. The main drivers are rapid nutrition, lifestyle, and socioeconomic transitions, consequent to increasing affluence, urbanization, mechanization, and rural-to-urban migration. Less investigated determinants of the metabolic syndrome include psychological stress in urban setting, genetic predisposition, adverse perinatal environment, and childhood "catch up" obesity. Data show atherogenic dyslipidemia, glucose intolerance, thrombotic tendency, subclinical inflammation, and endothelial dysfunction are higher in South Asians than Caucasians. Many of these manifestations are more severe and are seen at an early age (childhood) in South Asians than Caucasians. Metabolic syndrome and cardiovascular risk in South Asians is also heightened by their higher body fat, truncal subcutaneous fat, intra-abdominal fat, and ectopic fat deposition (liver fat, etc.). Further, cardiovascular risk cluster manifests at a lower level of adiposity and abdominal obesity. The cutoffs of body mass index and waist circumference for defining obesity and abdominal obesity, respectively, have been lowered and the definition of the metabolic syndrome has been revised for Asian Indians in a recent consensus statement, so that physicians could intervene early with lifestyle management. Data from a major intervention program conducted by us on urban adolescent schoolchildren in north India for prevention of obesity (the MARG project) has shown encouraging results, making it a model for any future intervention program in South Asians. Cardiometabolic risk is high in South Asians, starting at an early age. Increasing awareness of cluster of risk factors and how to prevent them should be emphasized in population-wide prevention strategies in South Asian countries, primarily focusing on children.