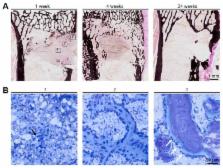 Bone grafts, i.e., autologous, allogeneic or synthetic bone substitute materials play an increasing role in reconstructive orthopedic surgery. While the indications and materials differ, it is important to understand the cellular mechanisms regarding their integration and remodeling, which are discussed in this review article. Osteoconductivity describes the new bone growth on the graft, while osteoinductivity represents the differentiation of undifferentiated cells into bone forming osteoblasts. The best case is that both mechanisms are accompanied by osteogenesis, i.e., bone modeling and remodeling of the graft material. Graft incorporation is mediated by a number of molecular pathways that signal the differentiation and activity of osteoblasts and osteoclasts (e.g., parathyroid hormone (PTH) and receptor activator of nuclear factor κβ ligand (RANKL), respectively). Direct contact of the graft and host bone as well as the presence of a mechanical load are a prerequisite for the successful function of bone grafts. Interestingly, while bone substitutes show good to excellent clinical outcomes, their histological incorporation has certain limits that are not yet completely understood. For instance, clinical studies have shown contrasting results regarding the complete or incomplete resorption and remodeling of allografts and synthetic grafts. In this context, a foreign body response can lead to complete material degradation via phagocytosis, however it may also cause a fibrotic reaction to the bone substitute. Finally, the success of bone graft incorporation is also limited by other factors, including the bone remodeling capacities of the host, the material itself (e.g., inadequate resorption, toxicity) and the surgical technique or preparation of the graft.

Priscilla Campana,  G Milano,  M E Pagano … (2014)
Bone substitutes are being increasingly used in surgery as over two millions bone grafting procedures are performed worldwide per year. Autografts still represent the gold standard for bone substitution, though the morbidity and the inherent limited availability are the main limitations. Allografts, i.e. banked bone, are osteoconductive and weakly osteoinductive, though there are still concerns about the residual infective risks, costs and donor availability issues. As an alternative, xenograft substitutes are cheap, but their use provided contrasting results, so far. Ceramic-based synthetic bone substitutes are alternatively based on hydroxyapatite (HA) and tricalcium phosphates, and are widely used in the clinical practice. Indeed, despite being completely resorbable and weaker than cortical bone, they have exhaustively proved to be effective. Biomimetic HAs are the evolution of traditional HA and contains ions (carbonates, Si, Sr, Fl, Mg) that mimic natural HA (biomimetic HA). Injectable cements represent another evolution, enabling mininvasive techniques. Bone morphogenetic proteins (namely BMP2 and 7) are the only bone inducing growth factors approved for human use in spine surgery and for the treatment of tibial nonunion. Demineralized bone matrix and platelet rich plasma did not prove to be effective and their use as bone substitutes remains controversial. Experimental cell-based approaches are considered the best suitable emerging strategies in several regenerative medicine application, including bone regeneration. In some cases, cells have been used as bioactive vehicles delivering osteoinductive genes locally to achieve bone regeneration. In particular, mesenchymal stem cells have been widely exploited for this purpose, being multipotent cells capable of efficient osteogenic potential. Here we intend to review and update the alternative available techniques used for bone fusion, along with some hints on the advancements achieved through the experimental research in this field.

S. Ma,  Yi Zuo,  Huanan Wang … (2007)
In this study, we prepared nano-hydroxyapatite/polyamide (n-HA/PA) composite scaffolds utilizing thermally induced phase inversion processing technique. The macrostructure and morphology as well as mechanical strength of the scaffolds were characterized. Mesenchymal stem cells (MSCs) derived from bone marrow of neonatal rabbits were cultured, expanded and seeded on n-HA/PA scaffolds. The MSC/scaffold constructs were cultured for up to 7 days and the adhesion, proliferation and differentiation of MSCs into osteoblastic phenotype were determined using MTT assay, alkaline phosphatase (ALP) activity and collagen type I (COL I) immunohistochemical staining and scanning electronic microscopy (SEM). The results confirm that n-HA/PA scaffolds are biocompatible and have no negative effects on the MSCs in vitro. To investigate the in vivo biocompatibility and osteogenesis of the composite scaffolds, both pure n-HA/PA scaffolds and MSC/scaffold constructs were implanted in rabbit mandibles and studied histologically and microradiographically. The results show that n-HA/PA composite scaffolds exhibit good biocompatibility and extensive osteoconductivity with host bone. Moreover, the introduction of MSCs to the scaffolds dramatically enhanced the efficiency of new bone formation, especially at the initial stage after implantation. In long term (more than 12 weeks implantation), however, the pure scaffolds show as good biocompatibility and osteogenesis as the hybrid ones. All these results indicate that the scaffolds fulfill the basic requirements of bone tissue engineering scaffold, and have the potential to be applied in orthopedic, reconstructive and maxillofacial surgery.