The Influence of the Gut Microbiome on Obesity, Metabolic Syndrome and Gastrointestinal Disease 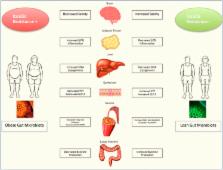 There is a fine balance in the mutual relationship between the intestinal microbiota and its mammalian host. It is thought that disruptions in this fine balance contribute/account for the pathogenesis of many diseases. Recently, the significance of the relationship between gut microbiota and its mammalian host in the pathogenesis of obesity and the metabolic syndrome has been demonstrated. Emerging data has linked intestinal dysbiosis to several gastrointestinal diseases including inflammatory bowel disease, irritable bowel syndrome, nonalcoholic fatty liver disease, and gastrointestinal malignancy. This article is intended to review the role of gut microbiota maintenance/alterations of gut microbiota as a significant factor as a significant factor discriminating between health and common diseases. Based on current available data, the role of microbial manipulation in disease management remains to be further defined and a focus for further clinical investigation.

The microbiome in inflammatory bowel disease: current status and the future ahead.

Aleksandar D. Kostic,  Ramnik Xavier,  Dirk Gevers (2014)
Studies of the roles of microbial communities in the development of inflammatory bowel disease (IBD) have reached an important milestone. A decade of genome-wide association studies and other genetic analyses have linked IBD with loci that implicate an aberrant immune response to the intestinal microbiota. More recently, profiling studies of the intestinal microbiome have associated the pathogenesis of IBD with characteristic shifts in the composition of the intestinal microbiota, reinforcing the view that IBD results from altered interactions between intestinal microbes and the mucosal immune system. Enhanced technologies can increase our understanding of the interactions between the host and its resident microbiota and their respective roles in IBD from both a large-scale pathway view and at the metabolic level. We review important microbiome studies of patients with IBD and describe what we have learned about the mechanisms of intestinal microbiota dysfunction. We describe the recent progress in microbiome research from exploratory 16S-based studies, reporting associations of specific organisms with a disease, to more recent studies that have taken a more nuanced view, addressing the function of the microbiota by metagenomic and metabolomic methods. Finally, we propose study designs and methodologies for future investigations of the microbiome in patients with inflammatory gut and autoimmune diseases in general. Copyright © 2014 AGA Institute. Published by Elsevier Inc. All rights reserved.

Ryan M Legge,  Kunjie Hua,  T. J. Kim … (2010)
In vertebrates, including humans, individuals harbor gut microbial communities whose species composition and relative proportions of dominant microbial groups are tremendously varied. Although external and stochastic factors clearly contribute to the individuality of the microbiota, the fundamental principles dictating how environmental factors and host genetic factors combine to shape this complex ecosystem are largely unknown and require systematic study. Here we examined factors that affect microbiota composition in a large (n = 645) mouse advanced intercross line originating from a cross between C57BL/6J and an ICR-derived outbred line (HR). Quantitative pyrosequencing of the microbiota defined a core measurable microbiota (CMM) of 64 conserved taxonomic groups that varied quantitatively across most animals in the population. Although some of this variation can be explained by litter and cohort effects, individual host genotype had a measurable contribution. Testing of the CMM abundances for cosegregation with 530 fully informative SNP markers identified 18 host quantitative trait loci (QTL) that show significant or suggestive genome-wide linkage with relative abundances of specific microbial taxa. These QTL affect microbiota composition in three ways; some loci control individual microbial species, some control groups of related taxa, and some have putative pleiotropic effects on groups of distantly related organisms. These data provide clear evidence for the importance of host genetic control in shaping individual microbiome diversity in mammals, a key step toward understanding the factors that govern the assemblages of gut microbiota associated with complex diseases.

The two mucus layers of colon are organized by the MUC2 mucin, whereas the outer layer is a legislator of host-microbial interactions.

Malin Johansson,  Gunnar Hansson,  Jessica Larsson (2011)
The normal intestinal microbiota inhabits the colon mucus without triggering an inflammatory response. The reason for this and how the intestinal mucus of the colon is organized have begun to be unraveled. The mucus is organized in two layers: an inner, stratified mucus layer that is firmly adherent to the epithelial cells and approximately 50 μm thick; and an outer, nonattached layer that is usually approximately 100 μm thick as measured in mouse. These mucus layers are organized around the highly glycosylated MUC2 mucin, forming a large, net-like polymer that is secreted by the goblet cells. The inner mucus layer is dense and does not allow bacteria to penetrate, thus keeping the epithelial cell surface free from bacteria. The inner mucus layer is converted into the outer layer, which is the habitat of the commensal flora. The outer mucus layer has an expanded volume due to proteolytic activities provided by the host but probably also caused by commensal bacterial proteases and glycosidases. The numerous O-glycans on the MUC2 mucin not only serve as nutrients for the bacteria but also as attachment sites and, as such, probably contribute to the selection of the species-specific colon flora. This observation that normal human individuals carry a uniform MUC2 mucin glycan array in colon may indicate such a specific selection.

Clinical and Translational Gastroenterology is an open-access journal published by Nature Publishing Group. This work is licensed under a Creative Commons Attribution-NonCommercial-ShareAlike 4.0 International License. The images or other third party material in this article are included in the article's Creative Commons license, unless indicated otherwise in the credit line; if the material is not included under the Creative Commons license, users will need to obtain permission from the license holder to reproduce the material. To view a copy of this license, visit http://creativecommons.org/licenses/by-nc-sa/4.0/