Identification of a secondary RET mutation in a pediatric patient with relapsed acute myeloid leukemia leads to the diagnosis and treatment of asymptomatic metastatic medullary thyroid cancer in a parent: a case for sequencing the germline 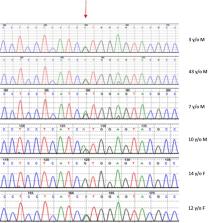 The incorporation of tumor-normal genomic testing into oncology can identify somatic mutations that inform therapeutic measures but also germline variants associated with unsuspected cancer predisposition. We describe a case in which a RET variant was identified in a 3-yr-old male with relapsed leukemia. Sanger sequencing revealed the patient's father and three siblings carried the same variant, associated with multiple endocrine neoplasia 2A (MEN2A). Evaluation of the father led to the diagnosis and treatment of metastatic medullary thyroid carcinoma. Detection of RET mutations in families with hereditary MTC allows for genetic risk stratification and disease surveillance to reduce morbidity and mortality.

Implementation of next generation sequencing into pediatric hematology-oncology practice: moving beyond actionable alterations

Jennifer A. Oberg,  Julia L Glade Bender,  Maria Luisa Sulis … (2016)
Background Molecular characterization has the potential to advance the management of pediatric cancer and high-risk hematologic disease. The clinical integration of genome sequencing into standard clinical practice has been limited and the potential utility of genome sequencing to identify clinically impactful information beyond targetable alterations has been underestimated. Methods The Precision in Pediatric Sequencing (PIPseq) Program at Columbia University Medical Center instituted prospective clinical next generation sequencing (NGS) for pediatric cancer and hematologic disorders at risk for treatment failure. We performed cancer whole exome sequencing (WES) of patient-matched tumor-normal samples and RNA sequencing (RNA-seq) of tumor to identify sequence variants, fusion transcripts, relative gene expression, and copy number variation (CNV). A directed cancer gene panel assay was used when sample adequacy was a concern. Constitutional WES of patients and parents was performed when a constitutionally encoded disease was suspected. Results were initially reviewed by a molecular pathologist and subsequently by a multi-disciplinary molecular tumor board. Clinical reports were issued to the ordering physician and posted to the patient’s electronic medical record. Results NGS was performed on tumor and/or normal tissue from 101 high-risk pediatric patients. Potentially actionable alterations were identified in 38% of patients, of which only 16% subsequently received matched therapy. In an additional 38% of patients, the genomic data provided clinically relevant information of diagnostic, prognostic, or pharmacogenomic significance. RNA-seq was clinically impactful in 37/65 patients (57%) providing diagnostic and/or prognostic information for 17 patients (26%) and identified therapeutic targets in 15 patients (23%). Known or likely pathogenic germline alterations were discovered in 18/90 patients (20%) with 14% having germline alternations in cancer predisposition genes. American College of Medical Genetics (ACMG) secondary findings were identified in six patients. Conclusions Our results demonstrate the feasibility of incorporating clinical NGS into pediatric hematology-oncology practice. Beyond the identification of actionable alterations, the ability to avoid ineffective/inappropriate therapies, make a definitive diagnosis, and identify pharmacogenomic modifiers is clinically impactful. Taking a more inclusive view of potential clinical utility, 66% of cases tested through our program had clinically impactful findings and samples interrogated with both WES and RNA-seq resulted in data that impacted clinical decisions in 75% of cases. Electronic supplementary material The online version of this article (doi:10.1186/s13073-016-0389-6) contains supplementary material, which is available to authorized users.

RET genetic screening in patients with medullary thyroid cancer and their relatives: experience with 807 individuals at one center.

Cristina Romei,  C M Sculli,  B Cosci … (2007)
Germline RET gene mutations are causative of multiple endocrine neoplasia (MEN) 2 and may be identified by genetic screening. Three different syndromes are distinguished: MEN 2A, when medullary thyroid carcinoma (MTC) is associated with pheochromocytoma and/or parathyroid adenomas; MEN 2B, when accompanied by a marfanoid habitus and/or pheochromocytoma; and familial medullary thyroid carcinoma (FMTC), when only MTC is present. During the last 13 yr, we performed RET genetic screening in 807 subjects: 481 with apparently sporadic MTC, 37 with clinical evidence of MEN 2, and 289 relatives. Genomic DNA was extracted from the blood of all subjects, and exons 10, 11, 13, 14, 15, and 16 were analyzed by direct sequencing after PCR. We unexpectedly discovered a germline RET mutation in 35 of 481 (7.3%) apparently sporadic MTC patients. A germline RET mutation was also found in 36 of 37 patients with clinical evidence of hereditary MTC. The distribution of RET mutations in cysteine and noncysteine encoding codons was significantly different in the two groups of patients, with the prevalence of RET mutations in noncysteine codons being higher in MTC that presented as apparently sporadic (P < 0.0001). A total of 34 FMTCs (75.5% of all FMTC) arrived with apparent sporadic MTC, with no familial history of other MTC cases. According to genetic screening and clinical data, our 72 families were classified as follows: 45 FMTC (62.5%), 22 MEN 2A (30.5%), and five MEN 2B (7%). In this large series of MTC, hereditary forms, mainly FMTC, were clinically unsuspected in 7.3% of apparently sporadic cases. As a consequence, the prevalence of FMTC in our series is higher than that previously reported (60 vs. 10%). In these cases, RET mutations were more prevalently located in noncysteine codons. Data derived from our series helped elucidate the role of RET genetic screening for the identification of all forms of MEN 2, and especially for FMTC, which are frequently clinically misdiagnosed as nonheritable, sporadic cases.

A Fiszer-Kierzkowska,  J Krassowski,  M Wiench … (2001)
The study was undertaken to evaluate the frequency of inherited medullary thyroid carcinoma (MTC) among patients with apparent sporadic disease. A stepwise algorithm was used depending on clinical indices and the age of patient at MTC diagnosis. One hundred sixteen patients with MTC verified by postoperative pathologic examination were subjected to genetic analysis of RET exons 10, 11, 13, 14, and 16 by means of polymerase chain reaction, restriction endonuclease digestion, and DNA sequencing. Among 116 apparent sporadic MTC patients, we identified eleven (9.5%) RET germline mutation carriers. Seven of these (6.0%) were found by routine analysis (exons 10 and 11). The frequency of inherited disease among patients younger than 45 years at diagnosis was 10.2% by analysis of typical mutations in exons 10 and 11. Extended genetic analysis (sequencing of exons 11, 13, 14, and 16) yielded 6.1% additional diagnoses, giving a risk of 16.3% in this age group. One previously unreported mutation in exon 11 affected codon 649 (TCG>TTG, Ser>Leu). In the true sporadic MTC patients younger than 30 years at diagnosis, frequencies of 36% and 4.5% in polymorphic variants L769L and S836S, respectively, were observed. The frequency for L769L was higher than in older patients (P <.05). The frequency of inherited disease among apparent sporadic medullary thyroid carcinoma patients is close to 10% in the Polish population of MTC patients. The extended analysis of all known RET proto-oncogene mutation sites is obligatory in patients younger than 45 years at diagnosis, but we also see the need to analyze the impact of rarer mutations in older patients.

This article is distributed under the terms of the Creative Commons Attribution-NonCommercial License, which permits reuse and redistribution, except for commercial purposes, provided that the original author and source are credited.