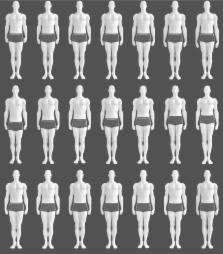 Human mate choice is influenced by limb proportions. Previous work has focused on leg-to-body ratio (LBR) as a determinant of male attractiveness and found a preference for limbs that are close to, or slightly above, the average. We investigated the influence of two other key aspects of limb morphology: arm-to-body ratio (ABR) and intra-limb ratio (IR). In three studies of heterosexual women from the USA, we tested the attractiveness of male physiques that varied in LBR, ABR and IR, using figures that ranged from −3 to +3 standard deviations from the population mean. We replicated previous work by finding that the optimally attractive LBR is approximately 0.5 standard deviations above the baseline. We also found a weak effect of IR, with evidence of a weak preference for the baseline proportions. In contrast, there was no effect of ABR on attractiveness, and no interactions between the effects of LBR, ABR and IR. Our results indicate that ABR is not an important determinant of human mate choice for this population, and that IR may exert some influence but that this is much smaller than the effects of LBR. We discuss possible reasons for these results, including the limited variability in upper limb proportions and the potentially weak fitness-signal provided by this aspect of morphology.

Confidence Intervals from Normalized Data: A correction to Cousineau (2005)

Dustin J Penn, Kristy Damjanovich, Wayne Potts (2002)
Genetic heterozygosity is thought to enhance resistance of hosts to infectious diseases, but few tests of this idea exist. In particular, heterozygosity at the MHC, the highly polymorphic loci that control immunological recognition of pathogens, is suspected to confer a selective advantage by enhancing resistance to infectious diseases (the "heterozygote advantage" hypothesis). To test this hypothesis, we released mice into large population enclosures and challenged them with multiple strains of Salmonella and one of Listeria. We found that during Salmonella infections with three avirulent strains, MHC heterozygotes had greater survival and weight than homozygotes (unlike sham controls), and they were more likely to clear chronic Salmonella infection than homozygotes. In laboratory experiments, we found that MHC heterozygosity enhanced the clearance of multiple-strain Salmonella infections. Yet, contrary to what is widely assumed, the benefits of heterozygosity were due to resistance being dominant rather than overdominant, i.e., heterozygotes were more resistant than the average of parental homozygotes, but they were not more resistant than both. The fact that MHC heterozygotes were more resistant to infection and had higher fitness than homozygotes provides a functional explanation for MHC-disassortative mating preferences.