According to the U.S. Green Building Council (USGBC), buildings account for a significant amount of environmental degradation. The building sector is the number one producer of global CO 2 emissions in the U.S., followed by the transportation and industrial sectors. 1 (See Figure 1 for the environmental impact of all U.S. buildings.) The concept of green buildings represents a major paradigm shift in the architectural, construction, and engineering fields. As society increasingly switches its appreciation of buildings from merely size and aesthetics toward environmental stewardship and efficiency, the USGBC's LEED Green Building Rating System has become increasingly popular to follow. 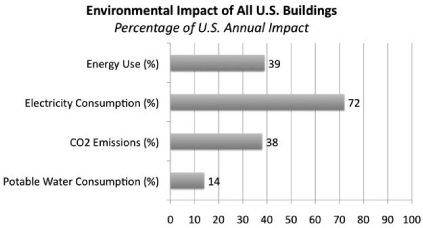 Since its inception in 2000, the LEED system has been promoting and monitoring green building practices throughout the United States. With a four-tiered rating scheme including LEED Certified, LEED Silver, LEED Gold, and LEED Platinum, the system currently has 35,000 projects already on their way toward certification. 2 In particular, the LEED for Existing Buildings (LEED-EB) system looks to retrofit existing buildings into those that are more sustainable, efficient, and environmentally friendly. Doing so significantly reduces the demand for new resources, as construction managers can recycle and reuse building materials and incorporate them into new designs. This truly is the definition of green building and is the way of the future.

By implementing green building practices, many of the adverse environmental impacts of buildings can be dramatically reduced, often for only a one to two percent initial cost premium over the price of conventional construction practice. 3 Several environmental benefits of green buildings include improving air and water quality, conserving natural resources, and becoming more energy efficient. Sudies have shown that green buildings, compared to normal buildings, can reduce energy use by 24–50 percent, CO 2 emissions by 33–39 percent, water use by 40 percent, and solid waste by 70 percent. 4 (See Figure 2 for the impact of green commercial buildings compared to the average commercial building.) In fact, if half of all new construction within the U.S. were built to match these percentages, it would be the equivalent of taking more than one million cars off of the road every year. 5 Economic benefits include reducing operating costs, improving employee productivity and satisfaction, and optimizing economic performance over the life cycle of the structure. 6 Additionally, health and community benefits include enhancing occupant comfort and health, and contributing to an overall positive environmentally-conscious reputation. 7 Furthermore, Taryn Holowka states, “people in green buildings have 40–60 percent fewer incidents of colds, flu, and asthma; patients in green hospitals are discharged as much as two and a half days earlier; and kids in green schools increase their test scores by as much as 18 percent.” 8 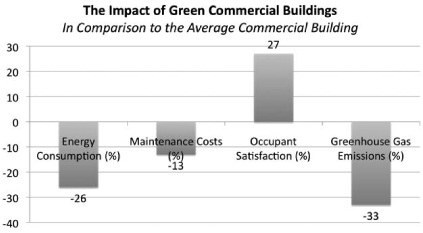 The U.S. EPA's Region 10 Park Place office building in Seattle was built in 1970. Its owner, Washington Holdings, and building manager, Wright Runstad & Company, have been encouraged by the EPA to use innovative energy conservation design, water conservation, waste reduction, stormwater management, and other strategies to make the structure more sustainable. Following the EPA's Green Building Strategy, which states that the EPA aims to strengthen the foundations of green building and raise public awareness of building-related impacts and opportunities, the Park Place building has become only the fifteenth LEED-EB Platinum building in the world, and one of the most impressive nearly-forty-year-old buildings in the entire United States. By using the LEED-EB Platinum green building rating system, the Park Place building management team has been able to successfully lower the building's energy consumption rate, improve its water efficiency, and make many other beneficial changes—all of which demonstrate just how effective the LEED system is at producing higher performance buildings.

Volumes 1-7 of JOGB are open access and do not require permission for use, though proper citation should be given. To view the licenses, visit https://creativecommons.org/licenses/by-nc/4.0/