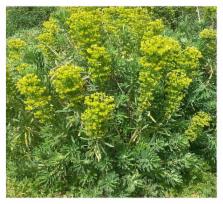 The aim of the present study was to evaluate antioxidant, antimicrobial, anti-HIV, and cholinesterase inhibitory activities of aqueous and alcoholic extracts from leaves, stems, and flowers of Euphorbia characias. The extracts showed a high antioxidant activity and were a good source of total polyphenols and flavonoids. Ethanolic extracts from leaves and flowers displayed the highest inhibitory activity against acetylcholinesterase and butyrylcholinesterase, showing potential properties against Alzheimer's disease. Antimicrobial assay showed that leaves and flowers extracts were active against all Gram-positive bacteria tested. The ethanolic leaves extract appeared to have the strongest antibacterial activity against Bacillus cereus with MIC value of 312.5  μg/mL followed by Listeria monocytogenes and Staphylococcus aureus that also exhibited good sensitivity with MIC values of 1250  μg/mL. Moreover, all the extracts possessed anti-HIV activity. The ethanolic flower extract was the most potent inhibitor of HIV-1 RT DNA polymerase RNA-dependent and Ribonuclease H with IC 50 values of 0.26 and 0.33  μg/mL, respectively. The LC-DAD metabolic profile showed that ethanolic leaves extract contains high levels of quercetin derivatives. This study suggests that Euphorbia characias extracts represent a good source of natural bioactive compounds which could be useful for pharmaceutical application as well as in food system for the prevention of the growth of food-borne bacteria and to extend the shelf-life of processed foods.

Satoshi Tanaka,  Takeshi Ara,  Kazuki Saito … (2010)
MassBank is the first public repository of mass spectra of small chemical compounds for life sciences (<3000 Da). The database contains 605 electron-ionization mass spectrometry (EI-MS), 137 fast atom bombardment MS and 9276 electrospray ionization (ESI)-MS(n) data of 2337 authentic compounds of metabolites, 11 545 EI-MS and 834 other-MS data of 10,286 volatile natural and synthetic compounds, and 3045 ESI-MS(2) data of 679 synthetic drugs contributed by 16 research groups (January 2010). ESI-MS(2) data were analyzed under nonstandardized, independent experimental conditions. MassBank is a distributed database. Each research group provides data from its own MassBank data servers distributed on the Internet. MassBank users can access either all of the MassBank data or a subset of the data by specifying one or more experimental conditions. In a spectral search to retrieve mass spectra similar to a query mass spectrum, the similarity score is calculated by a weighted cosine correlation in which weighting exponents on peak intensity and the mass-to-charge ratio are optimized to the ESI-MS(2) data. MassBank also provides a merged spectrum for each compound prepared by merging the analyzed ESI-MS(2) data on an identical compound under different collision-induced dissociation conditions. Data merging has significantly improved the precision of the identification of a chemical compound by 21-23% at a similarity score of 0.6. Thus, MassBank is useful for the identification of chemical compounds and the publication of experimental data. 2010 John Wiley & Sons, Ltd.

Paola Pisano,  S Cosentino,  M A Satta … (1999)
Essential oils and their components are becoming increasingly popular as naturally occurring antimicrobial agents. In this work the chemical composition and the antimicrobial properties of Thymus essential oils and of their main components were determined. Three essential oils obtained from different species of Thymus growing wild in Sardinia and a commercial sample of Thymus capitatus oil were analysed. The essential oil components were identified by GC/MS analysis. The antimicrobial activity of the oils and components was determined against a panel of standard reference strains and multiple strains of food-derived spoilage and pathogenic bacteria, using a broth microdilution method. The GC/MS analysis showed that the major constituents of the oils were monoterpene hydrocarbons and phenolic monoterpenes, but the concentration of these compounds varied greatly among the oils examined. The results of the antimicrobial assay showed that essential oils extracted from Sardinian Thymus species have an antimicrobial activity comparable to the one observed in other thyme oils. It seems also confirmed that the antimicrobial properties of thyme essential oils are mainly related to their high phenolic content. Among the single compounds tested carvacrol and thymol turned out to be the most efficient against both reference strains and food-derived bacteria. The results of this study confirmed the possibility of using thyme essential oils or some of their components in food systems to prevent the growth of foodborne bacteria and extend the shelf-life of processed foods.