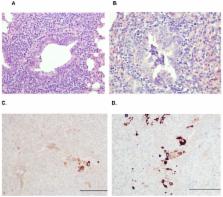 Respiratory syncytial virus (RSV) is the most frequent cause of bronchiolitis in infants and children worldwide. There are currently no licensed vaccines or effective antivirals. The lack of a vaccine is partly due to increased caution following the aftermath of a failed clinical trial of a formalin-inactivated RSV vaccine (FI-RSV) conducted in the 1960’s that led to enhanced disease, necessitating hospitalization of 80% of vaccine recipients and resulting in two fatalities. Perinatal lamb lungs are similar in size, structure and physiology to those of human infants and are susceptible to human strains of RSV that induce similar lesions as those observed in infected human infants. We sought to determine if perinatal lambs immunized with FI-RSV would develop key features of vaccine-enhanced disease. This was tested in colostrum-deprived lambs immunized at 3–5 days of age with FI-RSV followed two weeks later by RSV infection. The FI-RSV-vaccinated lambs exhibited several key features of RSV vaccine-enhanced disease, including reduced RSV titers in bronchoalveolar lavage fluid and lung, and increased infiltration of peribronchiolar and perivascular lymphocytes compared to lambs either undergoing an acute RSV infection or naïve controls; all features of RSV vaccine-enhanced disease. These results represent a first step proof-of-principle demonstration that the lamb can develop altered responses to RSV following FI-RSV vaccination. The lamb model may be useful for future mechanistic studies as well as the assessment of RSV vaccines designed for infants.

Xiulian Du,  J McLellan,  Ningshao Xia … (2013)
The prefusion state of respiratory syncytial virus (RSV) fusion (F) glycoprotein is the target of most RSV-neutralizing activity in human sera, but its metastability has hindered characterization. To overcome this obstacle, we identified prefusion-specific antibodies that were substantially more potent than the prophylactic antibody palivizumab. The cocrystal structure for one of these antibodies, D25, in complex with the F glycoprotein revealed D25 to lock F in its prefusion state by binding to a quaternary epitope at the trimer apex. Electron microscopy showed that two other antibodies, AM22 and 5C4, also bound to the newly identified site of vulnerability, which we named antigenic site Ø. These studies should enable design of improved vaccine antigens and define new targets for passive prevention of RSV-induced disease.

Respiratory syncytial virus disease in infants despite prior administration of antigenic inactivated vaccine.

Progress in understanding and controlling respiratory syncytial virus: still crazy after all these years.

Peter L Collins,  Jose A. Melero (2011)
Human respiratory syncytial virus (RSV) is a ubiquitous pathogen that infects everyone worldwide early in life and is a leading cause of severe lower respiratory tract disease in the pediatric population as well as in the elderly and in profoundly immunosuppressed individuals. RSV is an enveloped, nonsegmented negative-sense RNA virus that is classified in Family Paramyxoviridae and is one of its more complex members. Although the replicative cycle of RSV follows the general pattern of the Paramyxoviridae, it encodes additional proteins. Two of these (NS1 and NS2) inhibit the host type I and type III interferon (IFN) responses, among other functions, and another gene encodes two novel RNA synthesis factors (M2-1 and M2-2). The attachment (G) glycoprotein also exhibits unusual features, such as high sequence variability, extensive glycosylation, cytokine mimicry, and a shed form that helps the virus evade neutralizing antibodies. RSV is notable for being able to efficiently infect early in life, with the peak of hospitalization at 2-3 months of age. It also is notable for the ability to reinfect symptomatically throughout life without need for significant antigenic change, although immunity from prior infection reduces disease. It is widely thought that re-infection is due to an ability of RSV to inhibit or subvert the host immune response. Mechanisms of viral pathogenesis remain controversial. RSV is notable for a historic, tragic pediatric vaccine failure involving a formalin-inactivated virus preparation that was evaluated in the 1960s and that was poorly protective and paradoxically primed for enhanced RSV disease. RSV also is notable for the development of a successful strategy for passive immunoprophylaxis of high-risk infants using RSV-neutralizing antibodies. Vaccines and new antiviral drugs are in pre-clinical and clinical development, but controlling RSV remains a formidable challenge. Published by Elsevier B.V.

The studies were supported by NIH NIAID R56AI09100. The funders had no role in the study design, data collection and analysis, decision to publish, or preparation of the manuscript.